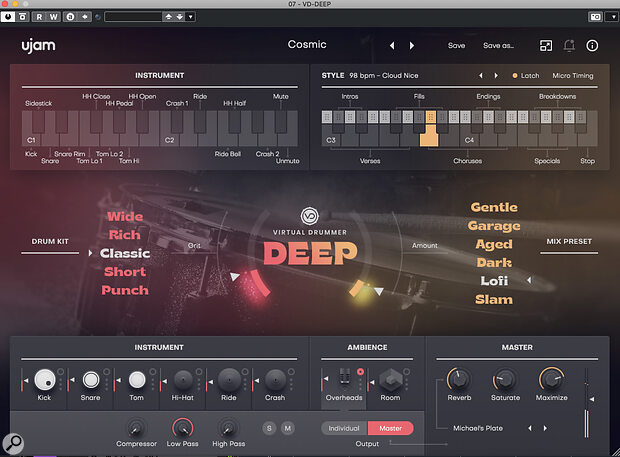 The latest addition to UJAM’s virtual drummer (VD) instruments series is DEEP, which UJAM describe as being soulful drums that deliver a dose of ’60s or ’70s vibe. If you are unfamiliar with UJAM’s virtual drummer line, then the reviews in the January 2020 and May 2020 issues would get you up to speed. DEEP’s drum sample content and specific collections of drum pattern style sets give it a distinct musical flavour within the UJAM drum line‑up, but it uses the same underlying UI and engine found in the earlier products and detailed within those previous reviews.

DEEP delivers five new drum kits, each with a different character. For example, Classic provides a fairly conventional acoustic kit with a controlled sound and could be used in a wide range of contexts. In contrast, the other four tend to have a more obvious character, from the slightly longer decay of Wide, to the tighter, more compressed, nature of Punch. The underlying samples offer up to 60 velocity layers and round‑robin samples so there are plenty of playing dynamics available.

You can use any of the five kits in combination with any of the 30 style‑based pattern presets, with each preset providing multiple drum patterns suitable to verse, chorus, fills, intros, endings and a few other options. For DEEP those styles focus on cool grooves that would slot straight into a soul or funk project but could also be put to good use in some pop and lighter rock contexts.

DEEP’s sample and pattern content is excellent but, of course, it is the very clever, user‑friendly, UI/engine that makes this content so easy to use in a creative content. For example, you get enough mix and effects options to tailor the sounds to your needs but without the danger of getting sucked into parameter paralysis. Equally, the simplicity of triggering sequences of patterns means you can work fast to build a full drum track but, as you can both drag and drop the preset MIDI patterns into your DAW for further editing, and trigger the individual drum sounds to create your own patterns, there is plenty of performance flexibility if you want it. That includes a very clever ‘mute’ system allowing you to mute particular drums within a preset pattern for added variation.

UJAM’s VD line might not offer the detailed level of control over your drum sounds that can be found in the likes of (for example) EZdrummer or Superior Drummer but, like other titles in the series, DEEP delivers very usable sounds and some great, style‑based, performances. The streamlined UI will undoubtedly be attractive to those wanting great drum tracks with a minimum of fuss. And, if you want to dig deeper into DEEP’s soul and funk drumming chops before committing, UJAM have a free trial version available for download via their website.