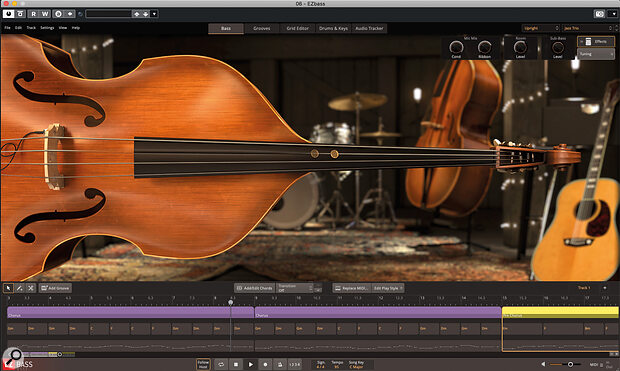 Toontrack add a fine and upstanding acoustic expansion for EZbass.

Since launching EZbass, Toontrack have not held back in terms of add‑on content. The subject of this review is, however, something a little different and, I suspect, something many EZbass users have been hoping for: the Upright EBX. The ‘upright’ bass is, of course, a core element of the orchestral string section and is therefore featured in many orchestral sample libraries. However, Toontrack have placed the focus here on a plucked approach as suits jazz, pop and rock contexts rather than an orchestral ‘bowed’ one.

A high‑end upright bass (apparently a Corsini Elite made by Calin Wultur) was meticulously sampled for the EZbass engine with an acoustic/modern (as opposed to classical) performance role in mind. A combination of on‑board piezo and five different microphones was used to capture the full dynamic and frequency range of the instrument. Each of the presets offers you a blend of some combination of these sources, whether that’s the piezo and a mic or two different mics. And, as with other EZbass instruments, each preset also includes a specific selection of further controls to shape your sound as well as the option to blend in a sub‑bass for extra bottom‑end goodness.

That said, I didn’t find myself really needing too much additional sub‑bass; the Upright EBX doesn’t disappoint in that regard. Indeed, across the range of presets, you can dial in an excellent range of tonal characters, from warm, deep and solid, through to lighter, brighter and more agile. The acoustic origins of the source shine through in all cases, though, and you get a genuine flavour of the acoustic upright character. Whether it’s a traditional jazz trio style sound, or a more contemporary indie rock, bluegrass or folk feel, Upright EBX undoubtedly has the tone. Indeed, unless you have your own upright bass, a classy selection of mics, and an acoustic space to do it justice, I expect you would be hard‑pressed to match the quality of the sound.

Unless you have your own upright bass, a classy selection of mics, and an acoustic space to do it justice, I expect you would be hard‑pressed to match the quality of the sound.

Of course, while the sound is one piece of the jigsaw, there is also the playing required. Like the other EBX libraries, Upright ships with a goodly collection of MIDI groove content. This is organised into midtempo, uptempo and 12‑bar categories, includes both straight and swung grooves and options in 3/4 and 4/4. The supplied grooves make it easy to see (hear!) just how convincing the Upright EBX can be within a mix. Toontrack also have steadily expanding MIDI groove packs for EZbass and, in testing, patterns from the Jazz, Latin Jazz, Singer Songwriter and Acoustic Songwriter packs also worked well with Upright EBX. For those that don’t play a real upright (that’s me then), these groove expansions are an important element of the overall EZbass experience, so I do hope Toontrack keep them coming.

If you need the sound of an upright bass in your productions, the combination of EZbass and the Upright EBX is a very attractive option. It sounds fabulous and, while a virtuoso player would undoubtedly give you those extra human details (and perhaps cost you something similar for a single day of session work), EZbass Upright EBX delivers a quality, characterful, performance. A joy to use.

The Upright EBX for EZbass delivers the essential character of an upright bass with a minimum of fuss.