Over the last few years SOS has reviewed the growing range of virtual instruments offered by UJAM. With a team that includes members of the original Virtual Guitarist development for Steinberg, the VG heritage is clear to see but UJAM's current line-up of virtual drummers, bassists and guitarists have brought that concept fully up to date. Recently added to the stylistic options provided by Amber, Silk, Sparkle and Iron, the latest virtual guitar offering is Carbon. And while Iron was already pretty heavy, Carbon gets heavier; it's built around a virtual eight-string guitar and offers a stylistic take on modern metal and rock. It also includes sound design elements that perhaps take it beyond conventional guitar tones. 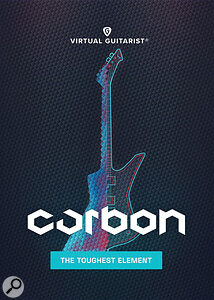 The underlying concept here is similar to UJAM's other virtual guitar and bass instruments. You get a large collection of style-based preset pattern collections that can be triggered and repitched on the fly for your chosen root note or chord. This is combined with some streamlined, but flexible, amp modelling options to customise your guitar tone. The UI is slick, easy to use, and the emphasis is on creating full performances quickly and easily. It's a great design concept and works as well here as in the earlier titles.

Style patterns and eight-string aside, Carbon also offers something extra over and above the other VG titles. First, like the latest iteration of the Virtual bassist instruments, Carbon includes an Instrument mode in addition to the style-based player mode. This means you can also use Carbon as a conventional multisample virtual instrument. It considerably increases the flexibility on offer. In Player mode, Carbon can also switch between single note (great for pattern-based riffs) and the more usual chord-based playback of the patterns. For the heavy styles targeted here, single note mode is a very useful addition.

Carbon could easily find a role in film/TV scoring as well as more conventional (if heavy) music production.

Carbon also offers new sound-shaping possibilities. Automatic double-tracking now offers up to four voices with options for arranging the stereo imaging. Equally, the new Filter and Finisher multi-effects options can go from conventional treatments into sound design territory. As a result, Carbon could easily find a role in film/TV scoring as well as more conventional (if heavy) music production.

UJAM have done a very good job of creating something that can undoubtedly get very heavy but also maintains the articulation of the performance. Modern metal guitars are not just notes obliterated by distortion and, thankfully, Carbon gets that right. The style collection is genre appropriate, the UI remains super-easy to use and the option to go from conventional heavy guitar into sound design is great. Of course, modern (and futuristic) eight-string metal guitar might not be for everyone, but this is a cool tool and ought to appeal to media composers as well as music producers.