UK Sound is a sub-brand of BAE, a well-respected manufacturer of vintage-inspired analogue hardware, its aim being to offer access to the BAE sound for a price more within reach of the home-studio market. But they've not taken a bargain-basement approach. UK Sound gear is still hand-assembled in the USA and high-quality components adorn circuit boards that sit in solid, nicely finished metalwork.

There are obviously some differences, notably the presence of some less expensive components, including the output transformers, but it is still all of decent quality. Some of the units clearly benefit from a modular approach to design, with circuitry and controls occupying only one half of the standardised 1U 19-inch rackmount chassis, and other models pair two such 'modules' in the same box. The UK Sound 1073, reviewed here, uses a similar chassis, but is a single-channel product whose circuitry and controls occupy the full width of the unit.

As the name suggests, this 1073 is firmly rooted in the famous Neve 1073 design, and it provides both the preamp and the EQ sections. There have been countless homages to the 1073 in the half-century since it first saw the light of day. They vary in quality, particularly in terms of the metalwork, painting, solidity of the controls, the quality of components and, importantly, the quality assurance. This one sits at the better end of that spectrum!

The UK Sound 1073 features separate inputs for mic and line sources, as well as a handy instrument input on the front.

The controls are classic 1073. A switched gain control (-20 to +80 dB at mic level, -20 to +10 dB at line level) is partnered by a continuous output trim knob. This allows fine control between the fixed gain points, but also means you can choose to keep things relatively clean-sounding or to 'drive' this device in search of character without overloading the next device in the chain.

The knobs and switches are joined by six front-panel switches: power on/off; Z, which uses a transformer tap to change the mic input impedance between 1200 and 300 Ω (enabling you to extract a slightly different tonality from passive moving-coil or ribbon mics); 48 (volt phantom power); DI, to engage the front-panel quarter-inch TS jack high-impedance instrument input; and EQ, to engage or bypass the EQ section. Other than a blue/purple LED to confirm power present, that's it. Around the back are an IEC power inlet (115/230 V AC) with fuse, and three XLR connectors, one each for the balanced line-level output, and mic and line-level inputs (the input source is selected by putting the gain knob in the appropriate position). 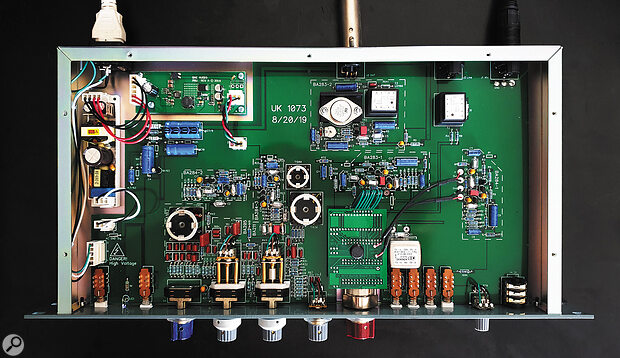 Inside, the audio components are all through-hole types, which should make servicing easy in the future.

Inside, most of the audio circuitry sits on one large PCB and through-hole components are used throughout. While there's no inherent sonic advantage in that, it (and the spacious layout) will make replacing capacitors many years down the line rather easier than had SMDs been used. (Speaking of SMDs, the only ones I could see used here were on the power supply daughterboard). There are three unbranded inductors, and the three transformers are branded OEP, which is an arm of UK transformer manufacturers Carnhill who, until relatively recently, manufactured transformers for Neve.

The line input impedance is 10kΩ and the instrument input circa 150kΩ. The output impedance, at 35Ω, is low enough to interface nicely with vintage 600Ω equipment such as an 1176, in which scenario the maximum output level is +27.4dBu.

The only specification on the UK Sound website that made me raise an eyebrow was the Equivalent Input Noise — the figures quoted seem to refer to something else, though this didn't manifest itself as a problem in practice.

So far, then, no real surprises and it follows the 1073 paradigm very predictably. At the end of the day, the sound is what's important. To test that, I used the UK Sound 1073 alongside a few other 1073-ish devices I have here (from BAE, Sound Skulptor and Golden Age, as well as some plug‑in emulations), on a range of mic and line sources, with capacitor and dynamic mics, and some instruments.

There was always more than enough gain available. The preamp is very much in the classic Neve 1073 ballpark: big, warm and slightly soft around the edges, in a pleasant way. I could record vocals fairly cleanly, or with a bit of added heft and thickness, and the gain could be cranked and the output backed off to inject some fuzzy dirt into DI'd guitars and basses (an effect I often like). That choice of transformer seems to have been well judged, then.

What really makes this unit useful, though, when recording or mixing, is the EQ section. Yes, I know we all have EQs-a-plenty in our DAWs these days, but there's something to be said for shaping the sound before it goes into the box. The broad-brush tonal changes on offer here were perfect for fattening an old bass guitar whose sound I love but whose balance always needs a little correction, and for lifting the top end of my voice for a little more clarity when recording with my favourite ribbon. Just as important is that using the EQ in this way while recording means you can change that balance before driving the output transformer into saturation. If you prefer, you can record clean and 're-preamp' the sound via the line-level input, but personally I prefer the right sound to be in my cue mix; this way you never have to contend with latency.

I'd happily find a home for this in my studio, and it deserves to see years of service in many others.

The tactile experience of dialling these settings in shouldn't be underrated either. No, it really shouldn't make a difference, but we're all more fickle than we'd like to think. Put simply, if it feels nice when I make changes, it puts me in a better mood, and if I'm in a better mood when recording myself I get better performances down on 'tape'!

One very minor misgiving is that you really need to get down below the unit to see some of the settings for the EQs. Although they're marked clearly on the front panel, they're often obscured by the tall, chunky knobs. It might have been nice to have a detent for the EQ gain knobs' unity positions too, but that's not a deal-breaker by any means.

As I said at the outset, this isn't a 'cheap' product, but it is nonetheless being pitched as a 'more affordable' brand than BAE. With that in mind, I was initially expecting it to feel rather cheaper than it did, and that it might, just possibly, be a tad overpriced as a result. But I have to say that I was very pleasantly surprised. It sits somewhere between the more affordable equivalents from the likes of Warm Audio and Golden Age Premier, and both the Neve units and the slavishly accurate clones from the likes of BAE. As such, its price tag is justified. Indeed, if I didn't already have this base covered, I'd happily find a home for this one in my studio, and it deserves to see years of service in many others.

BAE's designers have chosen all the right corners to cut in delivering the UK Sound version of their 1073, the result being a high-quality mic preamp and EQ that sounds great.