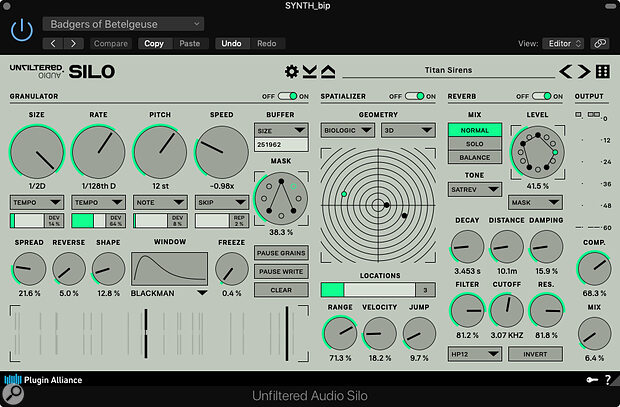 SILO combines granular processing with reverb and pitch change, the aim being to produce complex, musically involving effects. It works by splitting the input into ‘grains’ — essentially very short sound segments — which can then be processed in various ways.

The GUI uses simple control graphics augmented by green lines to represent amounts. The Granulator section has large controls for grain Size, Rate, Pitch and Speed, which relate to how audio data is read into and out of the grain buffer. Smaller controls set the Spread, Reverse (this value determines the probability of grains being reversed), Shape and Freeze, and there’s a choice of windowing shapes accompanied by a graphic of the grain window shape. Shape further changes the selected windowing shape. The four main controls can be modulated, with a percentage deviation slider for each control source. There are also a variable buffer size and buttons for Pause Grains, Pause Write (which allows grain creation to continue with no new audio being added to the buffer) and Clear, as well as a variable Mask control that imparts a rhythm to the grain creation process by determining when grains can and can’t be created. A waveform display at the bottom indicates the nature of the granular processing, and a switch at the top turns this whole section on or off.

The Spatializer section is one of SILO’s most interesting features, as it can create a dramatic sense of width and motion. The GUI displays dots on a RADAR‑type display, each dot or ‘emitter’ representing the possible position of a grain, and the controls allow the grains to be moved dynamically at different speeds from dot to dot, changing their location in the stereo/binaural field. Each selectable algorithm (Comets, Moons, Meteors, Stars, Shimmer and so on), has its own rules of movement. You can also choose the spacial type, including a ‘3D’ option, which includes Doppler shift, so that the faster a grain moves, the more pitch change becomes audible.

The reverb section has Level controls for Normal, Solo and Balance, a choice of reverb types, and Volume. You’ll also find familiar controls for Decay time, Distance and Damping. One of the reverb control options uses another Mask function, to determine how many grains pass through the reverb and how many bypass it. Balance automatically sets the level balance between grains fed through the reverb and those which bypass it. The reverb itself is pretty basic — it probably wouldn’t be a first choice for a reverb‑only effect — but it works well in this context. Its filter section offers a choice of filter types, with controls for Filter, Cutoff and Resonance plus an invert option. That just leaves the output section with its single‑knob compressor, level metering and overall wet/dry Mix knob. There are also separate filter and spatialisation controls plus a one‑knob compressor/maximiser‑type function designed to even out the grain levels.

SILO’s effects range from guttural cloudiness to glittery repeats, and there’s huge variety in between.

A huge range of presets helps you get acquainted with what SILO can do, and there’s also a randomise function that can throw up unusual and occasionally musically useful results. But the easiest way to find out what effect each control has is to turn on only the Granulator and experiment to see what you can coax out of it. When you feel comfortable with that, do the same with the Spatializer, and finally add some reverb. I found the controls to be pretty intuitive, the more so because all the key grain‑creation controls offer a tempo‑sync’ed option. The small horizontal faders can be used to impart subtle changes, though they do have enough range to create some very obvious results too.

SILO’s effects range from guttural cloudiness to glittery repeats, and there’s huge variety in between. Grains can appear as textures or as obvious repeats, depending on how you set up the Granulator controls. Using the 3D Doppler shift motion option, it’s possible to add a chorus‑like shimmer to proceedings and an impressive, immersive sense of width and depth (though set the movement too fast and the frequency shift can be unsubtle!).

The result also depends hugely on the nature of the input signal and how much effect you mix in, and that means there’s always something new to try. For example, a fairly bland synth pad can be given a Wavestation degree of complexity by adding in about 20 percent of the effect. Voices can take on an interesting layer of crystal‑style chatter, and rhythms can gain an extra layer of detail, with the Mask controls playing an important role in adding rhythmic variation. Or you can go 100‑percent wet, to create background textures from just about any source. In short, there’s oodles of scope here for sound designers and anyone who makes more experimental styles of music, whether EDM, chill or ambient. Just as importantly, SILO is easy to control.