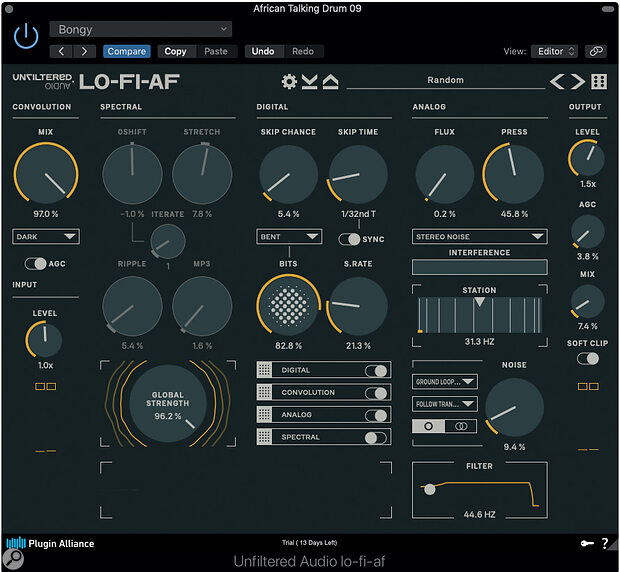 Unfiltered Audio’s LO‑FI‑AF, available through Plugin Alliance (including in their subscription bundles), combines four damage‑wreaking sections to offer a range of treatments that extend from the fairly subtle to out‑and‑out audio vandalism! There’s the usual ‘random dice’ function but, usefully, the extent to which parameters are allowed to change when using this can be defined in the Settings page, accessed by the cog wheel button. Other global changes include the GUI background colour, tooltip prompts and an on/off switch for the waveform visualiser, which saves a little horsepower when off. All the common plug‑in formats are supported.

All four stages have bypass buttons stacked in the lower‑mid section of the GUI and these stages can be dragged into a different series order from here if required. The first stage is based on convolution and offers a range of speakers and microphones, all chosen for their lack of hi‑fi credentials, of course: there are phone and toy speakers, faulty, nasal or hissy microphones and so on. An AGC switch automatically sets the gain to adjust for any level lost due to the convolution process.

Next comes a Spectral section, with controls to add lo‑fi time stretching and pitch-shifting, both of which can be used together but in the opposite direction if you want to create some old‑school processing artefacts without actually stretching or repitching the sound. You can set the number of times that a Zero‑Shift effect is applied, to further degrade the sound; the more of this you dial in the more CPU overhead is needed. There’s also a Ripple control, which randomly distorts the spectral data, and an MP3 knob to introduce those, erm... coveted(?) low bit‑rate MP3 artefacts. A Global control regulates the overall amount of processing in this section, but it doesn’t affect the time‑stretching features.

LO‑FI‑AF is a very capable lo‑fi toolkit capable of surgically targeted destruction and it could easily find applications in just about any musical genre... apart from, perhaps, classical or traditional folk music.

If you feel your audio is still that bit too recognisable, don’t worry, as the Digital section can introduce a skipping CD effect, with or without tempo sync and with a variable probability of a skip occurring. Various styles of bit reduction are also available here, as well as sample‑rate reduction. But don’t forget good old analogue, as this final processing stage can create real mayhem by adding intense level compression and mangled tape‑like speed warbles. It also includes a radio interference style sub‑section, which modulates the signal using shaped noise in various flavours that include Feedback and Demodulate, with the Station radio tuning dial setting the target frequency. Here you can introduce anything from a gentle tape hiss, via gritty nastiness and detuned radio sounds to a full‑on ring‑modulation‑style effect. A further stage lets you add noise from various types of media such as tape hiss or vinyl, and ground‑loop hum (50 and 60 Hz).

Whatever survives passing through these four processing sections goes to the output section, which offers variable AGC to stabilise the levels and a Mix control to blend it with the original audio — which you will probably have forgotten the sound of by now. Add some soft clipping plus high‑ and low‑cut filtering and your artistically damaged sound is good to go.

While this plug‑in can produce raucous, atonal chaos (which some will love), it is also supremely capable of adding a great deal of interest to things like bland drum loops, without rendering them entirely unrecognisable. It can also impart a gentle lo‑fi character to any type of sound. In short, LO‑FI‑AF is a very capable lo‑fi toolkit capable of surgically targeted destruction and it could easily find applications in just about any musical genre... apart from, perhaps, classical or traditional folk music. If you’re not yet convinced, you can always try the 14‑day free trial.