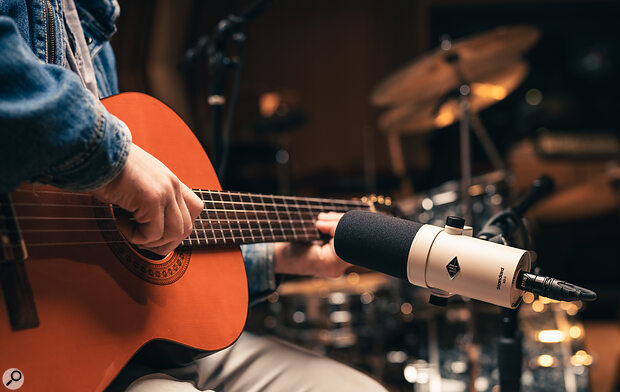 UA’s affordable new microphones prove themselves to be capable and versatile workhorses in the studio.

Universal Audio have a long history of making top‑tier studio hardware, and recently they’ve added a few high‑end microphones to their portfolio, including the David Bock‑designed UA Bock valve microphone and the Sphere L22 modelling mic developed by Townsend Labs. Chris Townsend is now part of the UA team, as is David Bock, so there’s a wealth of mic knowledge there!

The SD‑1 and SP‑1, however, are the first to use UA’s own branding, and form the company’s new Standard Series of microphones. These newcomers are more affordable than the Bock and Townsend models, and are manufactured in China to keep costs down. Both have a classy satin white finish and are adorned with a diamond‑shaped UA badge.

The SD‑1 is an end‑fire, cardioid‑pattern dynamic studio vocal microphone, with a switchable 200Hz low‑cut filter for reducing rumbles plus a switchable Articulation setting. This engages a presence lift between 3kHz and 5kHz and is accessed, like the filter, using a pair of DIP switches on the base below the XLR output. The mic has a built‑in swivel yoke and weighs in at a hefty 1.26kg, with overall dimensions of 254 x 178 x 102mm. The yoke has a mounting point that fits equally well on a traditional mic stand or on an articulated desk stand, and the mic comes with thread adaptors. A sculpted black foam cap sits over the narrower, snout‑shaped basket, maintaining the elegant lines of the microphone.

The mic is designed for both studio recording and podcasting, and has a frequency response that is nominally flat from 50Hz to 16kHz. Sensitivity is ‑58dB, where 0dB = 1V/Pa at 1kHz. No response plot is included. An internal shockmount minimises transmitted stand vibrations, and an integral windscreen reduces popping.

While a dynamic mic may not be the first thing that comes to mind for recording studio vocals, it is surprising how many vocalists have used them in the studio in preference to capacitor mics, which often have technically ‘better’ specifications. That’s because dynamic mics in general have a punchy sound and they don’t suffer from the very high‑frequency resonances that characterise some capacitor capsules, which is helpful in smoothing out some voice types by removing the brittle edge.

As an added bonus, owners of Apollo units can download custom channel‑strip presets designed for using the SD‑1 on specific instruments and vocal styles. These include what are described as “radio‑ready EQ and compression settings for vocals, guitars, and broadcasts”.

While not excessively expensive, neither is the SD‑1 a budget dynamic microphone — so does its performance stack up to its price? In short, the answer is yes. I recorded a very solid male vocal track that needed little in the way of additional EQ, and there was no tendency towards plosive popping when using only the provided foam cap. I didn’t feel the need for a separate pop screen.

Next I used the mic on my guitar combo to record some parts for the same track, and I was rewarded by a recording that was very faithful to what the amp was projecting into the room. The Articulation switch adds just a little more definition, and I’d be inclined to record most vocal parts with it switched on, but electric guitar parts sounded better with it off, as close‑miking an amp often seems to brighten the result.

The SD‑1 makes a surprisingly good alternative to a capacitor mic for vocal recording... 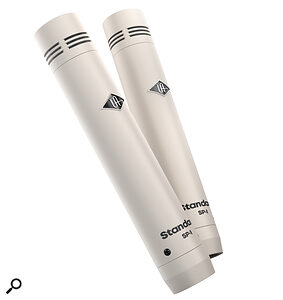 Pair of UA SP-1 microphones.If you need a pair of small‑diaphragm microphones that can be used individually or together for making stereo recordings, UA’s SP‑1 Standard Pencil Microphone Pair might just fit the bill. These mics are well suited for jobs such as recording acoustic instruments, drum overheads, percussion and live ensemble performances. The SP‑1s are fixed cardioid‑pattern capacitor mics, which have a sensitivity of ‑38dB (ref 0dB = 1V/Pa at 1kHz), have the familiar cylindrical shape reminiscent of mics such as the ubiquitous Neumann KM184, and are supplied as matched pairs complete with mic clips, a stereo bar, foam windscreens and a protective case. Standard 48V phantom power is required for operation. The capsule section unscrews, but as yet, no alternative capsules are available. A frequency response of 20Hz‑20kHz is quoted, but there is no response graph and the tolerances of the frequency response are not given.

The SP‑1s can tolerate high sound pressure levels (142dB SPL), enabling them to deal with loud instruments such as drums and brass. As with the SD‑1, there are numerous specially tailored Apollo channel‑strip presets to cater for drums, guitars, vocals and so on.

To test the SP‑1s, I used an acoustic guitar plus a wide selection of percussion in both mono and stereo, including some tiny bells that can show up problems in microphones. The SP‑1s actually coped rather well and delivered a very usable and tonally balanced acoustic guitar sound when aimed at the neck/body join, at a distance of around 250mm. When recording a darbuka hand drum, in addition to plenty of transient detail I was pleased to hear the low end sounding full — something that doesn’t always come over strongly in recordings. My tuned tongue drum also came across as warm and articulate. Even a cheap thumb piano and other odd pieces of jangly percussion that I’ve collected over the years were rendered perfectly well. I also used them to record my guitar combo, a job for which I would not usually choose a small‑diaphragm mic, and the result was perfectly usable, staying faithful to the original tone of the amplifier.

I wouldn’t go as far as to say either of these mics are exotic, but they did prove to be extremely capable all‑rounders. The SD‑1 makes a surprisingly good alternative to a capacitor mic for vocal recording, and though less sensitive than a typical capacitor mic, there’s still plenty of level for close‑miked vocals while at the other end of the scale, its ability to tolerate high SPLs means that loud guitar amplifiers or brash brass players are not going to intimidate it. Having a voicing switch offering two different presence characters is also very useful.

Clearly the SP‑1s are not without similarly‑priced competition from the likes of Rode, sE, MXL, Sontronics and other mic companies, but they are sensibly priced, easy on the eye and cope well with a wide range of sound sources as well as being matched for stereo use. The library of presets for different applications is clearly a useful bonus for Apollo users, but both these mics stand up perfectly well on their own merits, so don’t dismiss them if you don’t own an Apollo interface.

Between them, these two mics can cope with just about any requirement, and confirm that you don’t always need a large‑diaphragm capacitor mic to capture a good vocal sound.