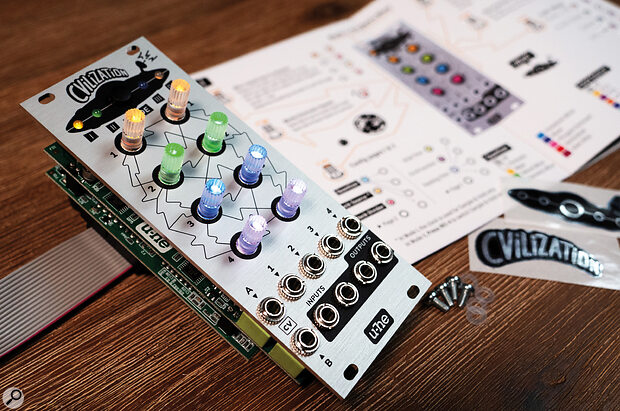 If you use software synthesizers, the name U‑he will be familiar to you. Their virtual synths — Zebra2, Diva, Repro, Bazille and Hive 2 — are highly successful products and their effects are well regarded too (Satin, their analogue tape emulation, is a regular on my mastering chain). The announcement of their first Eurorack module is quite the event then.

The first surprise for me, was that CVilization doesn’t capitalise on U‑he’s reputation for synthesis. Instead, it is a digital utility module with an impressive list of functions: scale quantiser, step sequencer, matrix mixer, sequential switch, sample & hold, slew limiter, quadraphonic panner and more.

The system is built around four DC‑coupled inputs and outputs that accept CV and audio signals. The Mode switch at the top circles around the four main modes: Mix, Route, Mucord and Pan. There are two modulation inputs — for gate, trigger and CV — and eight multicoloured push‑button encoders whose function depends on the currently active mode. The module uses 24‑bit/96kHz converters to keep your analogue signals as pure as possible, and accepts signals in the +/‑10V range.

Mode 1: Mix mode turns CVilization into a 4x4 matrix mixer for CV or audio. Any input can be routed to any output in any amount. All inputs and outputs can be muted too, which is great for live performing. Outputs can also be inverted, quantised to one of nine different scales, or you can enable sample & hold or glide. Furthermore, you can add static offsets in octaves, semitones (in or out of scale) and cents.

Mode 2 is a 4x4 sequential switch. Each output has an eight‑step sequence. Each step in a sequence can contain a value at any of the four inputs, a static CV value, a random CV value or a skip. Each step also has a gain control allowing you to fine‑tune its level. Each sequence can run at a clock division of the main clock which comes externally from one of the CV control inputs. Playback direction is adjustable too with options for forward, backward, zigzag, or random. And just like Mode 1, each output can make use of sample & hold, glide or quantisation.

Mode 3 is called the ‘Quad Mucorder’, essentially a four‑channel, 16‑step CV recorder. Each channel can record from its respective input. Outputs can be quantised with adjustable glide to keep them nicely in scale and sequences can be transposed via one of the control inputs (for example from a keyboard). Once recorded the sequences can be mutated during playback. For example, you can increase the space between pitch intervals, or narrow them, or allow a sequence to randomly copy values from an input CV or a neighbouring sequence. Mutations happen every time the sequence loops. At any point, you can change the amount of mutation, freeze the mutation at its current state, revert to the original sequence, or overwrite the original sequence with the current mutation. You can also overdub a sequence, replacing certain notes, whilst it plays.

The final mode is the Quadraphonic Panner. Each of the four inputs can be quad‑panned around the four outputs. Panning can be manually adjusted or automated using either auto‑pan (clockwise or anti‑clockwise at adjustable rates), auto‑hop (input threshold‑based random panning), or CV input. The obvious use for the Quadraphonic Panner is with a four‑speaker setup, but there are plenty of other uses too. Blending four inputs to a single output with internal level automation is a great way of combining CV sources, for example.

In the end, it’s less a question of what CVilization can do, but what can’t it do. Overall, a very impressive debut into the world of Eurorack.

Each mode has seven presets and an initialise preset, so recalling specific setups for live performance should be a breeze. Furthermore, various power‑user preferences can be adjusted by editing a text file accessed via SD card on the rear of the module. You can re‑define the nine quantisation scales, or even turn them into ‘volt‑scales’ which map up to 32 voltages across 1 Volt. There are other ‘expert features’ detailed on U‑he’s website too.

You may wonder how all of this functionality is squeezed into such a simple‑looking module. Each mode has sub‑pages, where the various functions can be accessed, and all of it is presented using just the coloured LEDs. You will need the cheat sheet nearby (a printed copy is included in the purchase) to remember how to access certain functions. The reliance on using colour for everything is clever, but I don’t think I will ever memorise whether a harmonic minor scale is cyan or green, or whether a sequence length of five should be orange or purple. I hate to say it but a small OLED screen might have helped.

The trade‑off is that CVilization does a breathtaking amount of stuff in a very small package. On any given day, CVilization could be a mixer, step‑sequencer, SH‑101‑style note sequencer, quantiser, sequential switch, panner, invertor, slew limiter, randomiser, sample & hold and, honestly, that’s just the obvious stuff. Anyone looking to make the most of a small case should check it out. In the end, it’s less a question of what CVilization can do, but what can’t it do. Overall, a very impressive debut into the world of Eurorack.