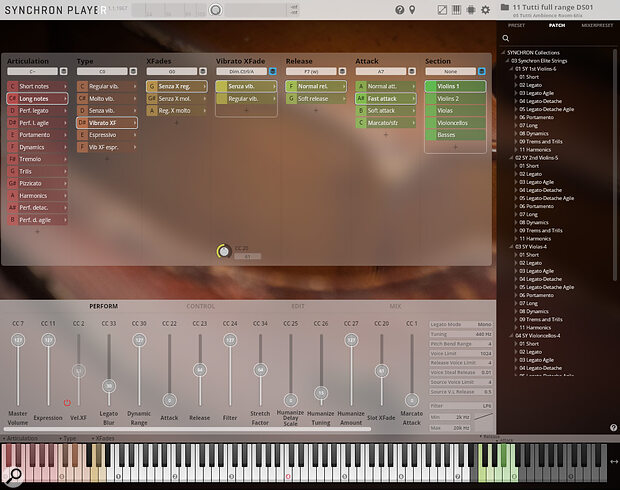 A new strings library from Vienna Symphonic Library comes as no great surprise, but this one’s a bit special. Synchron Elite Strings (SES) features some of the imperial city’s finest players, a handpicked, premier‑league team with a collective musical sensibility developed over many sampling and recording sessions. To recreate the excitement and focus of a film scoring job, VSL asked the musicians to play entire musical sequences rather than an endless procession of single notes, after which the requisite samples were extracted. Judging by the ultra‑nimble ‘agile’ detaché and legato samples, this approach has worked rather well.

Though the 6/5/4/4/3 line‑up is on the large side for a chamber strings orchestra, the group retains a sense of intimacy. The relatively large number of low strings ensures a strong bass presence: you could pit this ensemble’s loud deliveries against drums and guitars, or use their more delicate, sensitive and expressive articulations for classical repertoire and film music. Either way, the samples ooze class, and the players’ poised performances achieve a high standard across the board.

SES maintains VSL’s traditional wealth of performance detail. You can crossfade on the fly between no vibrato, regular and ‘molto’ vibrato (the latter thankfully not too overcooked), and use velocity crossfade to program subtle ebbs and dramatic surges, a vital part of orchestral sample programming. Elegant‑sounding sustained notes with a choice of attacks work nicely in chord pads, while the company’s excellent true legato style (available in polyphonic and monophonic modes) renders melody lines delightfully smooth.

The library nails both Hollywood and Bollywood, offering layered octave patches for soaring, heroic movie themes and terrific ‘Indian strings’ portamento slides with a swooning vibrato reminiscent of romantic 1930s film scores. When the on‑screen bullets start flying, media composers can dial up the spiccatos, short staccatos and frantic ‘measured tremolo’ repeated 16th notes to generate some hot rhythmic action. Pizzicatos and trills are also performed with great energy and precision, while the spine‑chilling harmonics (my personal favourite) gave me goose bumps. The only missing articulation of note is the feathery flautando bowing, but you won’t be needing that for your Street Fighter 2022 trailer score.

VSL’s free Synchron Player makes it easy to switch playing styles in real time, and I find its colour‑coded ‘Dimension Tree’ layout to be more intuitive and friendly than the old Vienna Instruments matrix system. If you fancy adding these tasty strings to your arsenal, you can start off with the Standard Library (60.9GB, four microphone positions) and maybe splash out on the Full Library’s extra five mikings when you score your first surround mix gig. The performances are identical in both versions, and the overall miking scheme is 100‑percent compatible with VSL’s other Synchron Stage titles. Not a cheap library, but its versatility, playability and musical quality are outstanding. Dave Stewart