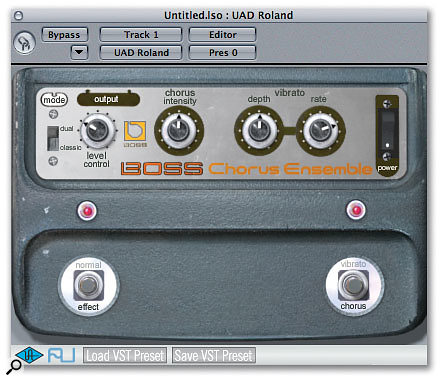 It's no secret that Roland/Boss have produced some of the most musical-sounding chorus processors ever, and what is so extraordinary is that they got the process sounding right first time around. Those early devices were based around analogue, charge-coupled delay lines, which gave them their soft, musical character — many subsequent digital chorus effects ended up sounding too clinical and hard-edged. In an agreement between Roland and Universal Audio, which will hopefully see the modelling of more Roland classics (oh, a Space Echo and Dimension D — please!), Universal Audio have developed and very accurately crafted an emulation of the classic Boss CE1 stomp box for their UAD1 PCI card. The CE1 is a very simple pedal with very few controls, which can generate either chorus or true pitch vibrato. It sounds 'right' on almost any sound source, especially guitar and fretless bass; it also suits keyboards particularly well.

The vibrato-chorus switch on the lovingly rendered plug-in (complete with vintage paint chips and scrapes) toggles between Vibrato and Chorus modes, while the other switch is really a bypass button. A single control knob adjusts the chorus intensity by simultaneously controlling both depth and rate, while two further knobs adjust the vibrato depth and rate when the pedal is in Vibrato mode. Universal Audio have, however, taken one liberty with the original design by adding a new stereo mode. In Classic mode, the left output signal is the direct dry audio while the delayed, modulated version is sent to the right output. This is how the original pedal worked to create a pseudo-stereo signal from a mono source; when only the mono output was used, the delayed and dry signals were summed as they still are in most guitar stomp chorus pedals. However, the new Dual mode works as two CE1s that can be fed from a mono or stereo input, and the two outputs carry the summed dry plus delay/modulation components for each channel, but with the modulating low-frequency oscillators running 90 degrees out of phase with each other to create a wide stereo image. In other words, it's like having separate chorus pedals in the right and left-hand signal paths, but with their LFOs locked 90 degrees apart.

I've owned a number of Boss chorus units over the years and listening to the Universal Audio CE1 made me feel quite nostalgic. Chorus is now a much overused effect, but in situations where you need it, it has to sound right, and this one does, achieving the smooth, liquid sound usually associated only with analogue pedals. It's particularly good on clean guitar. Universal Audio have done a great job with the modelling, and though the pedal has very few controls and looks simple, I'm sure they had to meet a few challenges to get the sound this close. The vibrato option also works well when used gently and can add depth and interest to an otherwise static sound. If you want that old classic analogue chorus sound in a plug-in format, and you own a UAD1 card, then CE1 should make you very happy. Paul White 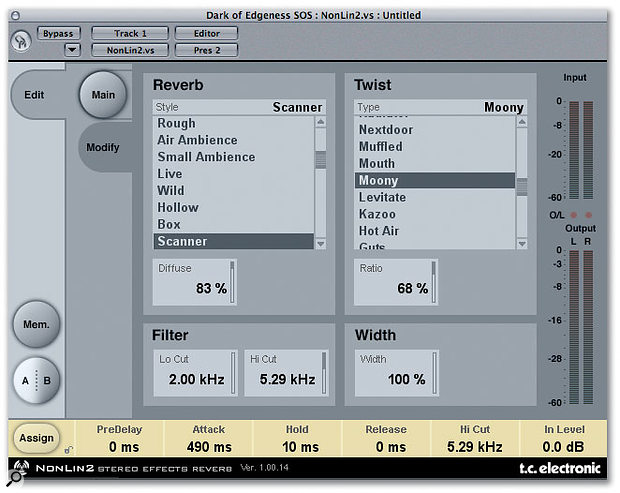 TC's Nonlin2 Stereo Effects Reverb is yet another algorithm that has made the transition from the System 6000 to the TC Powercore platform, and like its travelling companions, it has retained the System 6000 style of user interface and can import patches from that platform. The Powercore is now very well catered for by way of reverbs but Nonlin2 is rather different, being a dedicated special effects plug-in rather than a room or plate simulator. By applying unnatural attack and decay envelopes to the reverb signal, Nonlin2 is capable of generating all the common reverse and gated effects, but it goes much further than that, wandering into the realms of vocal and percussive ambience and completely new special effects using a repertoire of so-called 'Twist' processes. While traditional gated reverb is triggered by the input signal exceeding a gate threshold, Nonlin2 doesn't need to be triggered — it's all done by modifying the shape of the reverb burst so it works on any sound regardless of level.

The special effects or Twist side of the program is achieved by applying an assortment of radical processes to the reverb-generation algorithms, where the results range from granular-like effects and odd modulation to strident filtering. The manual doesn't provide much of a clue as to what's going on and the Twist effects are just listed by name, but then hearing the results is better than a thousand descriptive words. The only other processor I've come across that involves a similar approach to weirdness is Native Instruments' Spektral Delay. 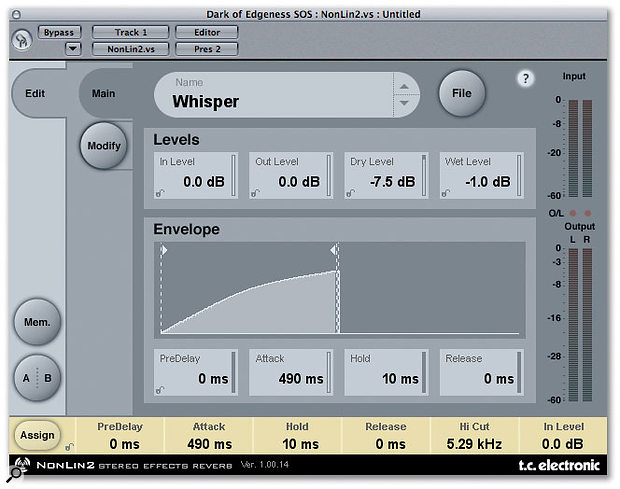 While the process is undoubtedly complex, operation couldn't be simpler — you pick from 20 preset reverb styles, pick from one of 20 Twist types, then adjust the amount of Twist applied by using the Ratio control. Conventional envelope and hold controls adjust the reverb attack and decay characteristics while Lo and Hi cut can be adjusted along with reverb diffusion and pre-delay. As with other System 6000 based plug-ins, there are so-called Focus Fields that allow you to access the main parameters from any page, though in this case there are only two pages to navigate anyway. You can change which six parameters show up in the Focus field bar, a setting that is saved with your preset.

I have to confess to liking oddball sound processors, especially those that produce musically satisfying results, and this one does. You can use it as a conventional gated, reverse or ambience reverb, but it really comes into its own when you start dialling in those Twist options. Because the processes are all tangled up in the reverb somehow, the end result is invariably complex and textural, ranging from robotic breathing effects to granular synthesis-style treatments. Furthermore, because Nonlin2 makes it possible to create reverb patches with very short decays, the effects don't wash out the original sound unless you want them to. There are treatments that work on anything from voice to synth pads or acoustic instruments, and in my view this Powercore plug-in will appeal most to people who enjoy sample libraries such as Distorted Reality, Liquid Grooves, Morphology and Twisted Textures. Paul White