When Universal Audio launched the Apollo Twin interface a few months ago, they gave users a first opportunity to experience their Unison preamp emulation technology. This was described in detail in our June 2014 review of the Twin (www.soundonsound.com/sos/jun14/articles/apollo–twin.htm), and has since been rolled out on existing Apollo units through a UAD software update. Unison is a combined software and hardware technology that allows various aspects of the analogue preamp audio path within the Apollo unit to be configured to work alongside a plug–in, with the aim of emulating the true performance of the original hardware. The interaction between the microphone and input stage can thus be modelled in a way that is not possible in software alone — though UA’s preamp plug–ins are still very effective for processing tracks that were already recorded through non–Unison preamps.

UA’s latest update to the UAD2/Apollo software includes four new plug–ins emulating items of high–end studio equipment: the Thermionic Culture Vulture, the Valley People Dyna–mite, the Tonelux Tilt and the Unison–assisted Neve 1073 preamp/EQ. Once the software is updated you get two weeks to play with each of the new plug–ins after you first launch them, so you’re able to give them a thorough workout before deciding if you need them or not.

Designed by UK engineers Vic Keary and Nick Terry and reviewed back in SOS August 2003 (www.soundonsound.com/sos/aug03/articles/culturevulture.htm), the Thermionic Culture Vulture must be one of the most exotic distortion devices ever created. Its high–gain valve circuitry offers a number of controllable distortion flavours that range from subtle warming to decidedly unsubtle grit. This unique device has now joined the phalanx of hardware modelled for the UAD2 and Apollo platforms, and as with all UAD plug–ins, Apollo users can record through it in real time as well as apply it at the mix stage.

A Dry/Wet mix control allows the plug–in to be used for parallel processing, while the character and extent of the saturation are controlled by a valve Bias control in combination with a Gain control, Overdrive switch and three switchable distortion modes. With Bias set anticlockwise, the distortion is fairly predictable, but turn it clockwise and things get very ragged! Overdrive adds extra gain, and again, is best saved for deliberate nastiness. Low–pass filters switchable for 9 or 6 kHz are also available to smooth the highs. The Mix control wasn’t present on the original, but seems a sensible addition given today’s appetite for parallel processing, as is a stereo linking control to maintain a stable image when processing stereo signals.

Of the three distortion modes, Triode is well suited to gentle warming, while Pentode One mode adds a bit of an edge and Pentode Two mode dirties things up even more. While modelling such a non–linear device is extremely difficult, the UA team seem to have got very close to capturing the character of the original. Used in moderation, the Culture Vulture plug–in can be used to impart a tape–like fullness to parts such as bass, drums or vocals, while the Pentode modes can add edge to guitars and snare drums. Vocals can be made to sound larger than life without the distortion becoming obvious, but there’s enough gain on hand to get downright dirty if need be. I’m not normally a fan of excessive distortion unless it is tamed by a speaker emulator, but it can be put to good use, for example, to add life to limp snare drum sounds, where several flavours of excess are readily available. True filth is on offer in all its forms, though for me, the more subtle end of the scale works best.

Designed in conjunction with Softube, the Valley People Dyna–mite emulation is a relatively straightforward to use, yet very characterful, dynamics processor. It can be used as a gate, an expander, a limiter or a simple de–esser. Though it can be employed as a standard peak limiter, the limiter section works best as an effect: when pushed hard it can add a real smack to lifeless sounds, and the original is routinely used for this purpose on drums and bass. 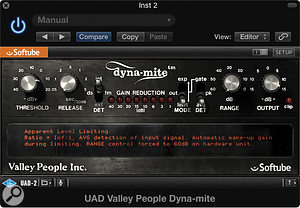 Everyone loves acronyms, and here we have ARC or Anticipatory Release Computation, an auto–release function that works by looking at the input programme material and then automatically adjusting the release time that’s been dialled in on the Release control to minimise pumping artifacts. The side–chain can be set to peak or RMS sensing; Peak provides a very fast attack time, while RMS allows more of the original transient to pass through. All the modes work as expected, but for me the limiter is what this plug–in is really about, especially on drums, as it really lifts the sound without beating it to death.

The most straightforward of all the new plug–ins, the Tonelux Tilt EQ is designed to speed up the process of getting a mix into shape. Paul Wolff, the former owner of API and founder of Tonelux, designed the original Tilt circuit, which has again been modelled in partnership with Softube. In its basic mode, the Tilt control, when turned clockwise from centre, cuts lows and simultaneously boosts the highs; turning it the other way cuts the highs and boosts the lows. A second mode, accessed via the Shape button, allows the control to boost or cut both the highs and lows while leaving the mids alone, giving a ‘smile’ or ‘frown’ curve. Additional high– and low–pass filters allow you to trim the extremes of the spectrum independently of the Tilt control, making this a very simple tool for quickly getting a mix close to the tonal balance you need. 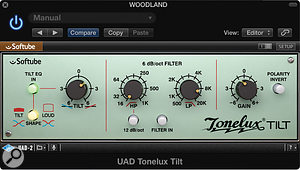 The main Tilt plug–in models all the nuances of the original’s audio path, including its transformers, but UA also supply a second version called Tilt Live, which leaves out the transformer modelling; instead of a Gain control, there’s a Boost Ceiling control, which prevents excess output level when extremes of tilt are applied. This has a lower DSP load than the standard version, allowing more instances to be used.

Neve’s 1073 is a class–A, transformer-coupled, transistor mic/line preamp with a classic Neve equaliser section, and UA’s original emulation has proved enduringly popular with UAD users. They have now released a new version that takes advantage of the Unison technology, which allows the Apollo’s input impedance to be switched automatically to complement the relevant settings in the plug–in. Apollo users can track via the plug–in with negligible latency, as well as applying it to previously recorded material. UAD2 users forego the Unison features and the ability to track through the 1073 at very low latency, but can use it at the mix to add ‘Neve flavour’ to existing tracks. According to UA, this is the only authorised and approved 1073 plug–in available.

The controls are set out as on the hardware original, with the dual–stage ‘red knob’ preamp above the three–band EQ section, which uses dual–concentric pots to adjust both gain and frequency. There are 10 places in the circuitry where clipping can occur depending on how the controls are set, and all of these have been modelled in detail. That’s important as one of the main attributes of the 1073 is how it sounds when pushed towards the limits of its operating range, and this attention to detail should mean that the plug–in has the same sweet spots as the hardware. In addition to its obvious use as a vocal preamp, the 1073 is popular for beefing up and adding definition to drums, bass and other instruments. Depending on how hard you drive the plug–in, the tonality goes from subtly warm to downright crunchy, so there’s lots of gain–related fun to be had.

Unison is clearly a big deal for the Apollo range, and UA’s commitment to it suggests that more plug–ins, such as preamps and guitar amps, may be in the pipeline. This latest batch of plug–ins is nothing if not eclectic, ranging from the elegant simplicity of the Tilt EQ to the extremes of the Culture Vulture and the unrivalled heritage of the Neve 1073. They all do a great job at aping the originals, and while detractors may claim that plug–ins will never replace hardware, these Universal Audio emulations are so close that any perceived shortcomings are more than made up for by the usual benefits of plug–ins — specifically the ability to use multiple instances and to recall their settings as part of a project.