It's hard not to be tempted by Universal Audio's mouth‑watering range of plug‑ins, but not every Mac has a spare PCI or ExpressCard slot. Now all you need is a free Firewire port...

Universal Audio's second‑generation UAD2 DSP cards have been around for a while now, but until recently, you needed either a PCI or an ExpressCard slot to use one. For those who want access to UAD plug‑ins, but don't have a compatible slot free, the answer could be the new UAD2 Satellite, which is an external unit that connects via Firewire. [In the years since our review, UAD have released versions of the Satellite which use USB and Thunderbolt as their connection protocol in place of Firewire, in Quad and Octo varieties - Web Ed.]

To be accurate, there are actually two new UAD2 Satellites, as the latest DSP unit comes in both dual‑ and quad‑processor versions. In all, there are five permutations of hardware and software available, to appeal to those with varying needs and budgets. The UAD2 Satellite is currently Mac‑only and connects via Firewire 800 or 400, supporting any fairly current Mac that has a Firewire port.

Running version 5.9 of the UAD software, the unit supports VST, Audio Units and RTAS hosts. If you already run a UAD card, you can combine the power of a UAD2 Satellite with your PCI‑based UAD1 and UAD2 cards to allow you to run more plug‑ins at the same time. The spec says that Mac OS 10.6.4 Snow Leopard or higher is required (32‑bit or 64‑bit mode) though it seemed to work OK on my studio system in 32‑bit mode, which is still running 'fair weather' Leopard 10.5.8. Sample rates of up to 192kHz are supported, but if you're connecting it to a Firewire 400 port, using higher sample rates will tend to hog the Firewire bandwidth.

For all its power, the UAD2 Satellite Quad is only a little larger than a typical external hard drive, measuring one inch high, six inches wide and eight inches deep. It comes with a universal-voltage external power supply with interchangeable connectors. Its rear panel hosts a pair of Firewire 800 connectors, a single Firewire 400 connector and a LED that starts up red and then turns green when a solid Firewire link has been established. If the link fails for any reason, such as a disconnected cable, the LED alternates between green and red. An illuminated logo on the front of the box shows when the unit is powered up. 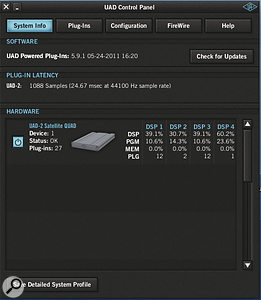 UA's neat control panel utility reports back on DSP and Firewire loads. A new LoadLock facility can be activated to make sure that each plug‑in's DSP resources are guaranteed even when you bypass them.

Following the 'try first, read manual later' approach, I hooked up the Satellite to my studio Mac Pro, which already has a UAD card fitted. I downloaded the latest UAD software, and on loading that, was informed that the Satellite needed a firmware update, which all happened painlessly, taking just a few minutes. After that, I was good to go, so I used the UAD control panel to disable my internal UA card and then loaded up the Satellite to see how much of the overall Firewire bandwidth I was taking.

If your audio interface is sharing the same Firewire bus as the Satellite, you can set a maximum limit to the Firewire use in the UAD control panel, to prevent the Satellite from eating into what your interface needs. With the Firewire limit set at 60 percent, you can run up to 27 stereo plug‑ins via Firewire 400 at a 44.1kHz sample rate, or twice as many via Firewire 800. The number falls proportionally at higher sample rates. For reference, my M‑Audio ProFire 2626 interface registered around 30 percent of the Firewire 800 bandwidth with all eight inputs recording and all eight outputs running at the same time. This figure doubled to around 60 percent of the bandwidth when connected over Firewire 400, the clear message being that you should ideally use Firewire 800, where possible, if running multiple ins and outs from your interface. In practice, of course, you're likely to be using fewer plug‑ins than 27 in real life, as some take far more DSP power than others. For example, four Manley Massive Passives on their own load the card to around 75 percent, but as they use only four stereo data streams, the Firewire overhead is quite low.

That's the point at which I glanced at the manual and saw that it stipulated Snow Leopard, and as my studio machine was still running 10.5.8, I moved the tests over to my laptop, as any problems that might subsequently show up on my Mac Pro could be due to the OS mismatch. The figures were pretty much the same as for my studio Mac; at 44.1kHz with Firewire 400, the maximum stereo plug‑in count registered as 27, falling to just six at 192kHz.

The Satellite can connect to both Firewire 400 and 800 buses.I figured I'd fare better connecting to the Firewire 800 bus, but the UAD info screen told me that my MacBook Pro's Firewire port wasn't capable of the required data rate, so it would be reset to run at Firewire 400 speeds anyway. The display showed the same results as when using the Firewire 400 port. Not all Firewire chip sets are created equal, and many manage only 70 to 80 percent of the theoretical maximum speed, so this may account for the UAD system deciding to downgrade my laptop's Firewire 800 port to Firewire 400 speeds.

Any external DSP box adds latency to the system, simply because of the need to shuttle data back and forth between the DSP and the host processor, and the buffering that entails. Most of UA's plug‑ins are designed to be used when mixing rather than when tracking, so this shouldn't be a serious issue, though the control panel allows Logic users to switch any tracks running UAD plug‑ins to Live mode (at the expense of some CPU overhead) if a lower latency is necessary. As standard, the buffer size is 1088 samples, which equates to a delay of 24.67ms — clearly not good if you are overdubbing. Live mode, which only takes effect when you close and reload the project, forces the UAD plug‑ins to use one of the computer's processing cores to reduce the delay to 320 samples, or 7.26 milliseconds.

What CPU resources are used to achieve this depends on the plug‑ins you have loaded, but on my MacBook Pro, running 26 UA Precision Limiters in Live mode, I'd estimate that 30 percent of one of the cores was tied up. With Live mode switched off, by contrast, the CPU load was negligible, perhaps only five percent of one core. To put this into context, I was running a typical 44.1kHz stereo mix with a lot of Logic plug‑ins as well as the 27 Precision Limiters (purely for testing purposes, not because I needed 27 limiters!), and the total CPU load was still only around 60 percent of one core with Live mode engaged, so when working at standard sample rates, Logic users can probably afford to leave the Live Mode box ticked. Alternatively, you can use Logic's own Low Latency button to temporarily bypass any plug‑ins that are adding significant delays if you need to overdub something part-way through a mixing session. In this case you may not need to switch to Live mode.

I make no excuses for being a huge UAD fan, as the plug‑ins are as good as they get. If you can afford the Omni bundle, you'll get a library of seriously great plug‑ins at a bargain price, including the Manley Massive Passive equaliser, pretty much all the top-drawer compressors, the best plate reverb emulation I've ever come across, and a raft of Neve processors. If you have a desktop machine and don't need portability, a card‑based processor is generally better, as you're not eating into your Firewire bus capacity, but if you need a system you can carry from studio to studio or run with your Firewire‑equipped MacBook or iMac, the Satellite fits the bill nicely.

The only alternative platforms to run these particular plug‑ins are the other UAD‑format cards, although other manufacturers make native emulations of some of the same hardware devices. If you're after a DSP card, meanwhile, TC's PowerCore and SSL's Duende have both been discontinued, so the only real alternative is a Pro Tools HD setup.

There are currently five options for those buying a UAD2 Satellite (all prices include VAT):

The Satellite range brings all the benefits of a UAD card within reach of many new Mac owners, as long as you can spare the Firewire bandwidth.