Do these closed‑back cans from German company Ultrasone have what it takes to compete with established studio models? 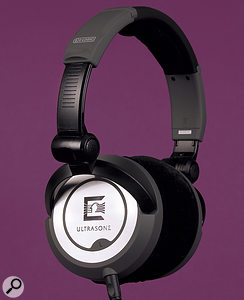 Like any respectable headphone manufacturer, Ultrasone claim to have unique technologies that make their products superior. In their case, the feature in question is 'S‑Logic', which is supposed to make the experience of listening on phones more like listening on loudspeakers. Unlike, say, Focusrite's Virtual Reference Monitoring, this isn't a form of digital processing, but refers to the physical geometry of the phones themselves.

If you're used to typical studio phones, the first thing you notice when you put on the Pro 750s is that the ring‑shaped cushions around the edge are much deeper than usual. They still form a seal around the ear, but position the actual drivers quite a bit further from the head than on standard phones. The earcups themselves, meanwhile, incorporate complex baffles that 'decentralise' the sound. The result is that, instead of the drivers firing directly into the inner ear, their signals are reflected into it from the outer ear, replicating, to an extent, the way sound arrives from loudspeakers. Ultrasone describe S‑Logic as generating "natural surround sound”, and also say that as a side benefit, it reduces the risk of hearing damage.

In other respects, the design of the Pro 750s adheres pretty closely to what most of us would think of as good practice. The cable is detachable, and screws into the base of the left earpiece. Two cables are supplied: an annoyingly short, straight one with a mini‑jack and a longer curly one with a full‑sized connector. A nice touch is that the Pro 750s ship in a neat padded case with a spare pair of ear cushions. The phones themselves are made out of reasonably heavy‑duty plastic, and are easy to adjust to fit your head. They're also pretty comfortable in use, although because the drivers sit so far from the head, there's less isolation from external sounds than with most closed‑back phones. The specs list their impedance as 40Ω, and although they are a fair bit less sensitive than my usual Sony MDR7509s, any headphone amp worth its salt will have no trouble driving them.

The Pro 750s present a frequency balance that is very bright and lively, with a broad lift in the upper mids, though some initial harshness was tamed once the headphones had been burned in. This is paired with a strong bass end, and something of a recess in the lower mid‑range. Their brightness makes the Pro 750s very revealing of transient detail, at the expense of tending to exaggerate sibilance; depending on the headphone amp and the material I was listening to, I sometimes found it a bit over the top, but in other circumstances it was just what was needed to bring out the excitement in a dark‑sounding mix.

Usually I find bright headphones tiring to listen to over long periods, but that was less of an issue than I expected with the Pro 750s. I suspect this is a side benefit of the S‑Logic technology, and as the review period wore on, I came to appreciate this aspect of their design. The claim of "natural surround sound” is heavily over‑stated, but S‑Logic does make a difference to the experience of listening on headphones. It's a lot more subtle than something like VRM, but can produce a sense of spatial separation between individual sources that isn't there with conventional closed‑back designs. It never made me unconsciously think I was listening on speakers — as VRM has done on occasion — but goes some way towards presenting centre‑panned signals as being in front of you rather than in the middle of your head, and helps to make the listener feel involved in the music. It's not a dramatic difference, but it's there, and I didn't detect any obvious down sides during my tests.

The Pro 750s sit at the high end of the market for closed‑back phones, costing more than the standard studio models from the likes of Beyer, Sennheiser and AKG. I doubt many studios could justify buying lots of pairs for musicians to use, but if you spend a lot of time listening to and making music on headphones, and want to find the pair that suits you best, you should definitely try them out. Having got used to the way they sound, I would be as happy to mix on these as on any other pair of closed‑back phones I've tried, and happier than on many!

Ultrasone's latest phones combine good basic features and sound quality with their innovative S‑Logic technology, and are well worth investigating.