Does the VSP2's build quality and performance justify its high-end price tag?

When it comes to stand-alone microphone preamplifiers, there's now a huge range to choose from. As in other parts of the recording chain, the combination of classic, time-proven designs, modern components and low-cost manufacturing has brought levels of performance that were once the preserve of the few into the reach of the many. However, truly outstanding sonic delivery inevitably requires exceptional (and therefore expensive) hardware. Fortunately for those of us who prize performance over price, there are manufacturers around who are, and remain, dedicated to that approach.

One such company is Munich-based Vertigo Sound, whose VSC2 compressor greatly impressed Hannes Bieger in SOS November 2012 (http://sosm.ag/vertigo-vcs2). Their new VSP2 Dual Mic Preamplifier 1976 (to give it its full title) follows the approach adopted in the VSC2 by utilising a proprietary, discrete-component alternative to the ubiquitous silicon chip. This time, it is the dual-op amp input stage that gets the makeover.

The VSP2 is an elegant unit, its metallic green fascia providing welcome relief from the commonplace basic studio black. High-end stereo mic preamplifiers in general tend to be minimalist affairs, with a gain control and switches for 48V phantom power and phase-reverse

on each channel often being the only options available. Back when consoles were king, the mic preamp of a recording mixer usually also offered a high-pass filter and a pad, both of which assisted in optimising the sound going to tape. The VSP2 not only follows that paradigm, but also adds a switchable front-panel high-impedance instrument input to both channels.

The VSP2 features two stepped gain controls per channel, one of which covers +12 to +66 dB of gain in 10 6dB steps, while the other acts as more of a trim, offering 0 to +6 dB of gain in 41 steps. This two-step gain structure not only gives the VSP2 a full 72dB of gain, but also endows it with an extremely fine resolution within each 6dB band. Metering is suitably minimalist, with a single bicolour LED showing green at output levels between -6 and +19 dBu and red appearing once the signal goes above the latter level.

The VSP2's external elegance continues internally. Identical-twin channel cards sit side-by-side next to a separate power-supply card. Internal connections between power supply, channel cards and front-panel controls are all on multi-way ribbon cables, all of which are run and dressed beautifully, emphasising the attention to detail in the VSP2.

The inputs of the VSP2 are transformer-balanced via the highly regarded Jensen JT16 microphone transformer. This classic design has its -3dB points at 0.45Hz and 220kHz, whilst in the 20Hz to 20kHz region the response is +0db/-0.06dB. Together with a transformer's typical high CMRR (Common Mode Rejection Ratio), excellent phase characteristics and inherent isolation from ground loops and RF interference, the JT16 effectively imposes no limitations on audio passing through it. However, as we'll see later, that doesn't mean that the audio emerges totally unscathed.

In the real world, the success of a transformer-balanced input stage depends not only on the quality of the transformer itself, but also on the way that the transformer integrates with the electronic circuitry around it. Although the Jensen JT16 was originally designed specifically for use with Jensen's own 990 Discrete Op Amp, the high performance levels and comparatively low cost of good monolithic op amps might lead you to wonder 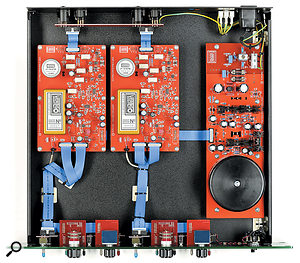 The simple construction belies the quality of components used in the VSP2. Note the Jensen input transformers on each channel, and Vertigo's discrete op amps. about the benefits of going to the expense of designing and building a discrete alternative.

In a monolithic op amp, all its component structures are created on a single block (the monolith) of silicon. The compromises inherent in that process mean that it is simply impossible to optimise every individual component. On the other hand, the separate parts of a discrete op amp are manufactured on production lines that are dedicated to producing only one particular component. This means that a discrete op amp is able to use the optimal example of every single part and to mount these on a printed circuit board designed specifically for the purpose, and can therefore deliver a much superior level of performance.

Although its inputs are transformer balanced, audio leaves the VSP2 via a THAT Corporation 1646 Balanced Line Driver. This IC has a balanced floating output that not only is stable driving into long cables and capacitive loads, but is also capable of driving +28dBu into a 600Ω load with very low noise and distortion.

Switching on the VSP2 produces silence until the circuitry settles down and the relays that mute the output to avoid any unseemly switch-on (or switch-off) transients reaching your monitors switch over. I do like this feature as, too often, in the heat of a session, I've found myself switching on a piece of outboard that I thought I'd muted at the desk, only to find out that I hadn't. The same situation can also arise with phantom-power switching and the VSP2 removes that particular transient by gently ramping up its 48V. I also noticed that the VSP2 runs very cool compared to some other preamps that I own.

All the VSP2 controls have a reassuring solidity that bodes well for the future. Both the large 10-step Grayhill rotary coarse-gain and the smaller 41-step fine-gain rotary switches had position detents that allowed for accurate adjustment. Mind you, given that the fine-gain is the one that's the most critical to get right for repeatability, I'd have liked some clues on the scale to tell me where I was around its forty-one steps.

The two-position 12dB/octave high-pass filter has corner frequencies at 80Hz and 120Hz. In addition to using this type of filter to reduce or eliminate entirely any mains hum or handling noise, I'm all for not recording low frequencies that are not in the source sound, and I tend to use high-pass filters quite extensively when tracking.

Possibly because I cut my engineering teeth on an early 8014 Neve console, I'm biased towards the sound of a transformer-balanced input. The VSP2 exhibits the typical transformer sound that comes from the distortion of low-level signals due to effects of hysteresis giving a subjective richness and warmth to the sound. If you are interested in a more detailed explanation, there is an excellent article by Hugh Robjohns in SOS February 2010 (http://sosm.ag/analoguewarmth) that covers hysteresis and other sources of analogue warmth.

Although adding that pleasantly euphonic warmth, the VSP2 also gave me the impression of a very clean, open and dynamic character, especially up towards the high end. My old EV RE11 dynamic microphone seemed to respond to this very well, opening up at higher frequencies in a way that I can't recall having heard previously. With my AKG C414 BULS large-diaphragm solid-state condenser microphones, the added warmth from the VSP2 made them sound a bit more 'vintage' in character, without affecting their clarity or detail. On the other hand, my elderly Bang & Olufsen BM5 stereo ribbon microphone didn't seem to gain much from the VSP2, probably because of its inherent low-mid warmth and top-end roll-off. Plugging an electric/acoustic guitar into the instrument input worked well, although I personally felt that bypassing the transformer (as this input does) was somehow missing the point.

VSP2 is a superb bit of kit. In addition to an outstanding level of build quality and performance, it has its own sonic character that is, to me, quite distinct from the reassuringly expensive transformer-balanced stereo mic preamp that sits next to me in my home studio. For those of us who care about these things, this individuality is extremely welcome as it gives us choices and helps us to develop the sounds that we want to hear.

Given the budget, I'd buy the Vertigo Sound VSP2 in a heartbeat, as it has a character and a performance level that I know I could make great use of. However, the VSP2 also has the kind of price tag that means you'd want to make sure that you were doing the right thing in buying it.

If you're in the market for a high-end, transformer-balanced microphone preamplifier then the VSP2 should most definitely be on your audition list. Whether or not you decide to buy it will depend on it giving you what you want to hear. The Vertigo Sound VSP2 is a mic pre that I certainly won't be forgetting in a hurry.

In this rather rarefied area of the market, you'll probably also be checking out similarly priced units from the likes of API, Avalon, Neve, Chandler, Crane Song, Grace Design and Manley, to name but a few. There are also various options to be found going down the 500-series 'Lunchbox' route from some of these companies, as well as others such as Sunset Sound.

Technical Specifications At A Glance

The VSP2 may be a pricey preamp, but the price is fully justified by its excellent build quality and superb sound.