Improvements in the frame By JG Harding 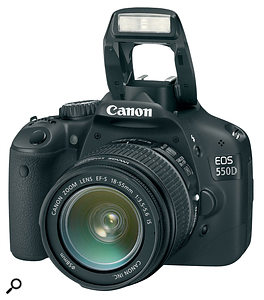 Canon's camera division have been very busy recently, releasing a new DSLR with comprehensive video features, and finally updating the 5D MkII's firmware to add a host of new video features. The 5D MkII was the first DSLR to see widespread adoption as a video camera, with its large, full‑frame 35mm sensor and interchangeable lenses allowing shallow depth of field. Many cinematographers were disappointed by the use of a non‑standard frame‑rate for recording 1080p video, with 30fps (frames per second) being the only available option. Now Canon have introduced firmware version 2.0.4 to address this complaint.

The update lets the 5D MkII shoot 29.97fps, 23.976fps and 25fps footage, allowing users to edit without needing to 'transcode' to a different frame rate. Audio capability has been polished, with AGC (auto gain control) compression being replaced by a 64‑level gain setting, which can be adjusted before recording. On top of this, the sample rate has been increased from 44.1kHz to 48kHz, which is the standard rate for video work. A brightness or RGB histogram can now be displayed when in video mode, assisting with manual exposure settings, though this can't be overlaid onto the preview screen. Shutter‑priority auto‑exposure and aperture‑priority auto‑exposure have been added to movie mode, allowing users to set either shutter speed or aperture manually and have the camera do the rest. The update can be downloaded from the Canon web site.

In further exciting news for DSLR film makers, Canon released the EOS 550DRebel T2i SLR (also known as the 550D), a consumer‑level camera that includes much of the functionality of the professional‑level 7D. The 550DRebel T2i boasts an 18 megapixel APS‑C (1.6 crop) CMOS sensor, practically identical to that found in the 7D, along with all the video modes and the same exposure metering as its bigger brother. Video mode includes full manual control, as well as a separate setting for highlight‑tone priority, allowing users to set one level for still photography and another for video. The screen has also been updated and is the largest on any EOS camera, consumer or professional. The 3-inch, anti‑reflective display, with a 3:2 ratio and 1040 dots, should make checking focus easy. ISO sensitivity range is also impressive, covering settings from 100 to 6400 (with 12800 accessible in 'expanded' mode), giving plenty of gain for low-light shooting. As with all cropped‑sensor EOS models, the 550DRebel T2i is compatible with both EF and EF‑S mount lenses, giving film‑makers a huge choice in both new and second‑hand markets. The only concession to cost appears to be the body construction: while the 7D is made of magnesium alloy and is fully weather sealed, the 550DRebel T2i is made using stainless steel and plastic, and does not have full protection from the elements. Priced at £779$799, it's currently the least expensive option for 1080p DSLR videographers.

MOTU, known for their Digital Performer DAW software and high‑quality audio interfaces, have recently begun producing audio/video interfaces. The V4HD, a Firewire 400 and 800 device, was their first release, offering eight channels of analogue, AES/EBU and ADAT audio in and out, SD and HD video interfacing, and also packing in composite SD interfacing and SDI and component interfacing for SD and HD resolutions. The device also provides capture of uncompressed SD footage or HD capture in Apple's ProRes editing format.

MOTU have decided to build on the strengths of this unit with their new HDX SDI video interface. The device connects via a PCI Express card or ExpressCard, giving the user sufficient bandwidth to capture 10‑bit, 4:2:2, uncompressed, 1080p, HD video (given the appropriate RAID disk setup and processor power). If you're editing using a compressed format, such as Apple ProRes or AVCHD, the HDX SDI will feed a 10‑bit stream to the host computer for encoding. The unit also has plenty of audio capability, with eight channels of analogue audio on balanced jacks, eight channels of AES/EBU interfacing and eight channels of SDI or HDMI audio, with sample rates up to 96kHz supported.

There's plenty to look at on the front panel, including eight five‑LED audio meters and an additional 16 activity LEDs for monitoring another 16 channels of audio I/O. The centre of the panel is dominated by a large timecode read-out, and the unit can synchronise via Sony nine‑pin (RS422) machine control, timecode, or video reference from a master clock. The reference can also pass through to another device, or terminate with the MOTU. Another nifty feature is Auto On, which allows the HDX SDI to switch itself on and off with the host computer. The MOTU HDX SDI costs £595$895. 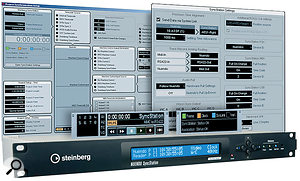 Steinberg have released a new SD and HD synchroniser for Nuendo, called the SyncStation. The SyncStation will provide sample‑accurate synchronisation for the Nuendo host, distributing word‑clock signals at sample rates up to 192kHz, and allowing varispeed control from within the DAW. Connecting via USB to the host PC, the SyncStation is designed to precisely align the correct audio sample to the leading edge of a video frame, as well as distributing word clock, timecode and frame reference with pinpoint accuracy. Older video and audio decks can be sync'ed too, with the SyncStation sending Sony nine‑pin (RS422) and MMC (MIDI Machine Control) data, and even reading and sending LTC (Longitudinal Time Code) data to legacy outboard, helping shuttle the transport to the correct position. VST System Link is also supported, meaning that the SyncStation can also keep more than one DAW aligned with a variety of outboard equipment. The Nuendo SyncStation costs £2608$3999. 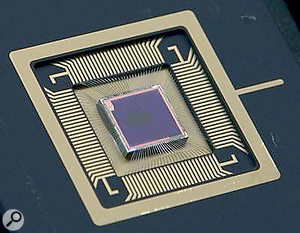 Microscopic silicon photo-diodes are used to capture light in both CCD- and CMOS-type sensors used in digital cameras, but they are only capable of capturing, on average, between 25 and 50 percent of the light at the sensor surface. This leads to the use of digital gain and noise reduction to achieve greater brightness, which can leave the image grainy. InVisage, a company led by veteran sensor and semiconductor engineers, have developed a new form of sensor using 'quantum dots', a "special class of nanocrystal semiconductors”. A silicon film containing 'quantum dots' is laid over traditional CMOS sensor circuitry, allowing low-cost manufacturing and, it is claimed, between 90 and 95 percent light capture at the sensor.

QuantumFilm should allow mobile manufacturers to squeeze three times more pixels into a given area, and the first sensors using such technology should be in mobile phones (where tiny sensors suffer from the trade-off between pixel count and image quality) by 2011.

The all seeing 'i'Virtual viewfinder for iPhone 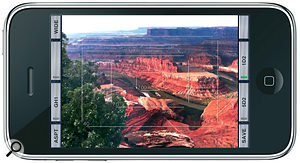 It seems the iPhone can be used for pretty much anything these days, and there's now one App that's particularly useful for directors and DOPs (Directors Of Photography). Coded by Dire Studio, it's intended to replace the old‑fashioned trick of making a frame with your thumbs and forefingers! The Viewfinder and Viewfinder Pro Apps use the iPhone camera and screen to show you what a shot will look like on a given camera at focal lengths of 35mm and up. The App is also compatible with iPhone wide‑angle adaptors for lower than 35mm, and will display different aspect ratios, useful for switching between video capture and stills photography when using DSLRs, for example.

Shortcuts can be set for several cameras and lenses, and those not present can be added by defining specs. Viewfinder then overlays white boxes for specific focal lengths, and can even grey out and digitally zoom parts of the screen, making it easier to find your shot. Range-finders are not only great for learning different focal lengths, but also save you changing the lens to get a different view! Viewfinder costs $8, while the Pro version, also suitable for larger format camera, costs $15, both from iTunes and the App Store. 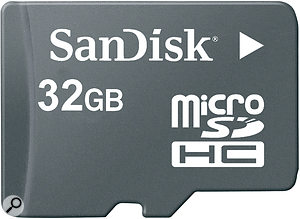 San Disk, manufacturers of solid-state memory media, have announced their highest-capacity microSDHC card. The new card packs 32GB of storage into a tiny card measuring 11 x 15mm! As with processor manufacturing, memory manufacturing involves cutting pathways into silicon at a microscopic level, a process known as lithography. The width of these pathways is expressed in nanometres (each one a ten‑millionth of a centimetre), and the microSDHC is manufactured using an extremely fine 32nm process, as are Intel's i3, i5 and i7 processors. The new 32GB card manages to squeeze three bits of data into each cell, as opposed to the standard two bits, allowing for very high capacity in a tiny physical space: 32GB is enough to store plenty of audio and video at high data rates. As an example, how about over two hours of 1080p HD video in 35mbps high-quality MP2 (as used in the JVC GYHM100 SD camcorder)? The card retails for around £144$199.