Now, here's a first. I was so taken with some of the sounds on an album I'd bought (the excellent Leylines, by AES Dana) that I contacted the producer to find out how they had been created. This, in turn, led me to this sample library released by Vital Arts Media. Creator Geoffrey Gee is an accomplished pianist with a sound‑design pedigree that includes work for Synthogy, Sonivox and Kurzweil, but realised that with his skills he could also invent entirely 'new' acoustic instruments by combining existing instruments and found sounds. The result is Plectrum, and what a result! 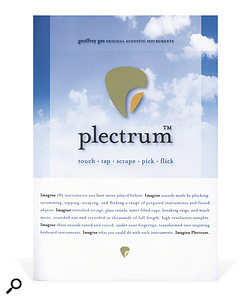 Shipping as a three‑DVD set and featuring nearly 12GB of beautifully recorded 24‑bit/96kHz samples, the 187 original acoustic instruments and 45 multitimbral Multis of Plectrum span a wide range of unusual timbres. However, with velocity switching and plenty of round‑robin variations they have great richness and variety, just like acoustic instruments, as well as offering great playability: no novelty items here!

The sample sets are sorted neatly into nine categories, the first four covering Strummed Strings, Struck Strings, Plucked Strings and String Harmonics, and offering rich instrumental pickings derived from piano and guitar. Plucked piano has become quite fashionable of late, but Plectrum explores many other avenues including scraping, tapping, picking and flicking using a wide range of objects, as well as other techniques such as detuning, muting and dropping objects onto the strings.

Favourites in these first folders include 'PianoStrums and EnoPad', with its subtle, yet haunting, sustained background tones and timbre somewhere between grand piano and zither; 'Farm Piano Strums' for its autoharp‑like resonances; and the tinkling sustain of 'Taps, Metals GenPad'. Unusual combinations abound, such as the pitch‑bent scrape underlying 'Pluck and Slides' and the harp/guitar morph of 'TwangPluck Piano', while the instruments based on delicate piano and guitar harmonics are just gorgeous.

Glass, Ceramics and Metals explore the instrumental potential of objects made of these materials, distilled from a huge number of recordings sorted into suitable instrumental sets. For example, the 38 Metal instruments encompass various materials, including silverware and brass, creating instruments reminiscent of (among others) the celeste, mbira and flexitone, as well as pitch‑bent watercups.

For me, the beauty of this collection is its feeling of old and new, of sounds that are experimental yet also strangely familiar. Overall, Plectrum is a marvel of creativity, and I recommend it most highly to any musician who wants to explore a host of 'new' acoustic instruments with true character. Martin Walker