Drum Tools has been produced and recorded by Wave Alchemy's Daniel Byers and Steven Heath. The two have all the gear necessary for making modern electronic music and, more importantly, know how to achieve the right sounds for the various sub‑genres tackled by each of their sample collections. Minimal Techno & Tech House is a very specific title, telling us exactly what to expect from the content, although it is also applicable to electronic music in general. 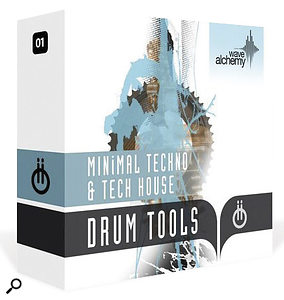 As indicated by the word 'tools', the collection contains the basic building blocks needed for producing minimal techno and tech house, the onus being on the musician to use them in the right way. Indeed, there are no editable 'sound banks' like those used by Ueberschall's Elastik player, nor are there any loops or grooves. There are, however, kit patches formatted for all the major software samplers and dithered 16‑bit versions of the 24‑bit WAV files to cater for hardware samplers and memory‑precious setups.

Some libraries inexplicably divide their content across an unfathomable system of folders; Wave Alchemy, on the other hand, have done the right thing and organised their 1950 samples into a logically conceived set of folders, which can be navigated in a matter of seconds.

The main folders are dedicated to individual sound types like claps, crash cymbals, hi‑hats and kick drums. Where it's been necessary to narrow things down more precisely, however, the library employs further layers of sub‑folders. Percussion, for example, contains the descriptively named Blips & Pops and Toms & Tones folders, amongst others. Similarly, in Snares, a Classic Snares sub‑folder holds a familiar, but essential, set of hits, while Layered Snares contains non‑standard creative combinations. Folders such as Sound Effects and Glitch collect together miscellaneous experiments, which are reasonably varied but still recognisably appropriate for the genre.

Also included is a list of gear that was used for generating sounds and shaping them, highlighting the point made by the team that everything was 'created from the ground up'. Predictably, Roland's TR808, TR606 drum and TB303 bass synthesizers were called upon when crafting some of the content, as were a Korg MS20 and ARP Odyssey, but there are also some live recordings and material created on slightly more exotic instruments, such as the Vermona DRM MkII and Elektron Machinedrum.

In general, the samples are clean and punchy, having been recorded using some truly top‑end analogue processors, although one or two clearly overloaded something during recording. The editing, apparently done by hand, ensures that the attack of each sample comes in straight away, so layering multiple sounds works well and there is no particular need to trim samples further.

Creating samples can be fun, but it's sometimes better to let experts do the donkey work. That is precisely the point of this very well-conceived product. Tom Flint

From DX to MODX with Manny Fernandez | Podcast
6 days 6 hours ago.