Not all of us can afford to have our tracks mixed by Chris Lord‑Alge. But Waves' latest plug‑in bundle might just be the next best thing...

Over the last couple of years, Waves have persuaded a number of big‑name engineers and producers to have their favourite effects and processing chains turned into Artist series plug‑ins. The biggest of all these scalps is arguably Chris Lord‑Alge — the superstar mix engineer who, along with his brother Tom, has perhaps done more than anyone else to shape the sound of modern rock records.

If there's one adjective that is widely associated with the Lord‑Alge sound, it's 'compressed', and Waves have already released a bundle called CLA Classic Compressors, containing faithful emulations of some of Chris Lord‑Alge's favoured spanking devices. The new Artist Series collection, by contrast, models the entire signal chain that Chris Lord‑Alge favours for various named instruments. (The equipment that goes to make up this chain is not always specified, but to learn more about his mix techniques and gear, take a look at Paul Tingen's Inside Track feature from May 2007: /sos/may07/articles/cla.htm.)

The CLA Artist Signature Collection consists of six plug‑ins: CLA Drums, CLA Bass, CLA Guitars, CLA Effects, CLA Unplugged and CLA Vocals. All share a similar user interface, which somewhat resembles the LARC fader controllers for Lexicon reverbs. Five or six faders control different components of the overall effect, while illuminated buttons above them switch between different styles of that process. So, for example, several of the plug‑ins feature a delay: the slider controls the amount of delay added to the signal, while the associated button switches the delay time between slap, eighth and quarter notes. An additional slider at the left adjusts input sensitivity — naturally, all the plug‑ins include a healthy amount of dynamics processing, so this is important — and in some cases there are extra controls above this. In general, I liked the no‑nonsense interface a lot more than that of some of the other Artist‑series plug‑ins. 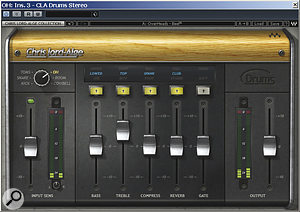 In CLA Drums, to pick a starting point more or less at random, the extra control I mentioned adapts the plug‑in to the source, so you can tell it whether it's dealing with a kick drum, snare, tom, overhead, room mic or, er, cowbell. The first two faders apply 'bass' and 'treble' EQ, with frequency ranges chosen using descriptive names such as 'roof' and 'top' rather than values in kHz. You then get a choice of three compression and reverb styles, and hard or soft gating.

In practice, I found myself really liking this plug‑in on overheads — I've never usually had good results from using lots of reverb and compression in this context, but a couple of fader moves in CLA Drums produced a really punchy, hard‑hitting sound that barely needed the addition of close mics. I tried it on kick and snare and found the results less to my taste; it's easy to push things too far and end up with a sound that is flat and lifeless. Overall, I was left with the impression of a plug‑in that excels if you want a particular kind of rock drum sound, but would be less useful in other musical contexts. There is also the practical point that, like many of the Waves Artist plug‑ins, this is a very CPU‑intensive design. Running a separate instance on every channel of a multitrack drum recording would take serious computing power. 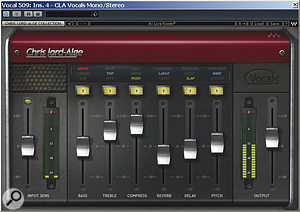 CLA Vocals retains the Bass, Treble and Compress sliders of CLA Drums, and adds three more of its own, offering different flavours of reverb, delay and stereo effects. Of the six plug‑ins, this was the one I found myself using the least, perhaps because a 'one size fits all' processing chain for something as variable as the human voice is never going to suit all tastes and all voices. We are, after all, talking about the most important and prominent element of the mix, and to my mind, you really need fuller control over reverb and delay times than can be provided by a single slider. Still, the slap delay sounds like a slap delay should, and the stereo options do a nice job of thickening the vocal without making it sound too obviously chorused or warbly. 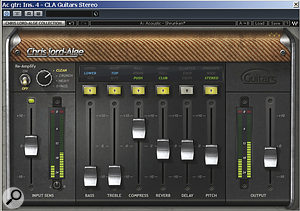 I got a lot more use out of the CLA Guitars plug‑in. This provides the same palette of sliders as CLA Vocals, albeit with different reverb and delay patches, and adds a simple but hugely effective Re‑Amplify control. I know not what amplifiers were modelled to create this, but I want them! In particular, the Crunch and Heavy settings really seem to nail that modern rock sound that somehow preserves note definition despite being ridiculously distorted. The two EQ sliders provide enough tone shaping to get most guitar sounds into the ballpark, the reverbs suit rock guitars well, and the chorus‑style stereo effects are very musical. Once again, it's a pretty genre‑specific plug‑in, but one that offers a fast and very convincing route to a classy, modern rock‑guitar sound. 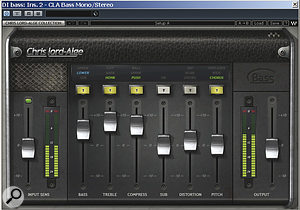 Better still is CLA Bass. Its various ingredients are all familiar effects I'm used to applying using individual processors, but somehow I've rarely managed to marshal them to sound anything like this good. The CLA Guitars plug‑in's Reverb and Delay sliders are replaced here by a sub-harmonic synth and three flavours of distortion, and there's no separate re‑amp option. What's perhaps most impressive is the way all the different elements of the plug‑in seem to work together, to craft a bass sound that is somehow polished yet rough, simultaneously. You can add as much bass as you need to anchor the bottom end, but at the same time use copious amounts of distortion to make the instrument punch through in the mid-range. You can squash it to the point where it becomes a furry, round ball of sound, and it will still somehow sound alive. It is, in short, great, and what's more, if you stay away from the distortion, it works on almost any style of electric bass. Most impressive. 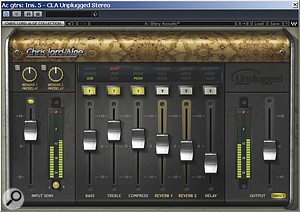 The CLA Unplugged plug‑in seems intended to mop up most of the other elements you might find in a typical rock mix, such as acoustic guitars and pianos. To the familiar low and high EQ and compression sliders, it adds a delay and two separate reverbs, each of which can have its pre‑delay adjusted.

Having spent quite a while crafting what I thought was a pretty good stereo acoustic guitar sound using other plug‑ins, I thought I'd test CLA Unplugged by seeing if it could match my own efforts. I killed the other plug‑ins, inserted CLA Unplugged, chose the first preset with 'acoustic' in the title... and wept bitter tears, because not only did it match the plug‑in chain I had laboriously assembled myself, it sounded miles better. I suppose that's why people pay Chris Lord‑Alge a lot of money to mix their records. On the down side, this is even more CPU‑intensive than some of the other CLA plug‑ins, so I ended up applying it off‑line in most cases. 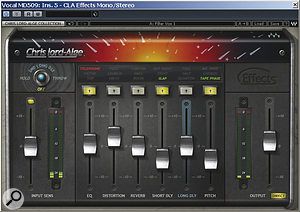 Finally, there's CLA Effects, which as the name suggests, offers a palette of six different effects and processes. Some, such as the EQ and distortion, obviously work better when the plug‑in is used as a channel insert, while the phaser/chorus, reverb, and short and long delays could work equally well on an aux send. To this end, a Direct button beneath the output level fader lets you set the overall mix to 100 percent wet.

A neat and fun idea is the Hold/Throw switch above the input sensitivity fader. When mixing, you often find you want to apply a long tempo sync'ed delay to just one or two phrases in a vocal performance, and this provides an easy way of doing just that. As the man himself explains: "All you have to do is duplicate your vocal track, put it on 100 percent wet, automate the throw button in all the spots you want, and you're done.”

As you'd expect, all of the six effects here sound great, but the way they're put together into a single unit highlights a problem with the overall design of these plug‑ins. To my mind, a nice way of using the CLA Effects plug‑in would be to run several instances of it on separate aux sends, each with only a single effect active. That way, it would be easy to balance the amounts of delay, reverb and chorus you want on each individual source. And you can do that — but as I've already mentioned, these are CPU‑intensive plug‑ins, and the particular problem with this arrangement is that even when individual effects such as reverb or delay are deactivated, they still use CPU power. So if you create six instances of CLA Effects, each with only one effect active, you'll be using six times as much CPU power as you would if you had one instance with everything switched on. On my (admittedly not particularly new) test machine, each instance I added bumped up Cubase's CPU meter by about 20 percent, so using six in a mix would be a complete non‑starter. The same applies to the other plug‑ins in the series. I wanted to use them on everything, but I simply couldn't! It's been a long time since I felt the pinch of CPU resources so acutely when mixing. I asked Waves why the plug‑ins work like this, and they told me that not all plug‑in hosts are capable of changing processes 'on the fly', so this was the only way to maintain universal compatibility.

Getting The Job Done

Reviewing these plug‑ins was an interesting and, in some ways, humbling experience. In the past, I have tended to be prejudiced against computer programs that try to do things for you; in the long term, surely it's more useful and more rewarding to learn how the different types of mix processors work and apply that knowledge in practice, rather than relying on what is at root an opaque, preset‑based approach? You'd think so, but the awkward fact is that for me, at least, these restrictive and apparently simple plug‑ins quite often produced better results than I could get in other ways. And at the end of the day, what really matters is how the final mix sounds.

It's not surprising that these plug‑ins are CPU‑intensive, though it is disappointing that the individual elements within them don't release CPU resources when switched off. But if you have the power to run them, the temptation to load up a single plug‑in and choose a preset rather than spend hours mucking about with complex effects chains becomes very strong indeed! They won't suit every genre of music, but there's a place for them in almost anything involving guitars and drums, and to my mind, these are perhaps the most successful Artist Signature Series plug‑ins yet. Now all we need is the plug‑in that automatically invoices record companies for thousands of dollars on our behalf...

Well, you could hire Chris Lord‑Alge to mix your track...

Waves' CLA Artist Signature Series bundle won't mix for you, but it will get you a long way towards a classy, modern rock sound — if your computer can keep up.