Although you are reading this in the bright and shiny new year, I am writing it as the old one draws to a very wintry close. So let's throw another log on the iFire and peer into the AppleSphere to see if we can second‑guess what the coming 12 months will bring.

Announced back in September, Mac OS X 10.7 (codenamed Lion) promises to bring an iPad‑like experience to the Mac. To me, the iPad is as much about touch as any of its other features, so are we going to see the first touchscreen Macs emerging in 2011? Garageband meets Minority Report? Can't wait! The obvious platform for this capability would be the iMac, with its all‑in‑one form factor, but the last release of a new iMac was at the end of July 2010, so it's unlikely to be updated again just to coincide with the release date of 10.7. Any announcement is likely to take place at 2011's Worldwide Developer's Conference, to be held in June, which has become Apple's premier venue for major announcements. 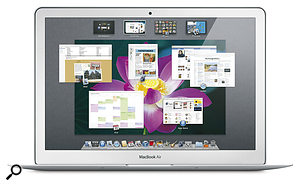 Mac OS X Lion, released into the wild in 2011, will bring significant changes to the Mac desktop and the way we use and download our applications.More likely than the iMac to be updated at that time is the MacBook Pro, as the most recent release was back in April 2010 (with just the addition of the i7 processor as a build‑to‑order option in October). While a touchscreen for the MacBook Pro might not make ergonomic sense, we are likely to see the Core 2 Duo processors (seen by some as out of date on a premium product) replaced across the whole range of MacBook, MacBook Air and MacBook Pro.

Although advertised as a feature of 10.7, the Mac App Store will open for business much earlier than the release date for the new OS. Trailed back in September, it's looking likely that the store will open its doors to coincide with the release of an update to Snow Leopard — version 10.6.6 — that contains the code necessary to run the Mac App Store. This might be seen as a further indication of Apple's bullish new approach to upgrade cycles, which is perhaps influenced by the mobile phone market. This is certainly not something we are used to with Mac Pros and Logic Pro, whose glacial development speeds currently happily match the replacement cycles of most musicians' setups. It is certainly true that if they updated any faster, it would make it very difficult for small businesses to remain current, unless a new funding model for supporting in‑house software updates is put in place.

So farewell to the old, and welcome to the new. What used to be something akin to a cottage industry, propped up by the hard‑earned cash of creatives and musicians who just wanted a computer that worked, is now becoming the mainstream. The income stream generated by Apple's continuing success is going to fund some incredible developments over the coming year, so hang on — it's going to be quite a ride!

Why not welcome in the new year with a virtual trip to your local App Store to sample some of these musical delights?