Bobby Owsinski has many years' experience as a musician and producer, but he's also been writing about the practical side of the audio production industry for some time, as well as teaching at Berklee College. I've long appreciated his audio production 'handbook' series, several of which are present in my own little reference library: the Recording Engineer's Handbook, the Mixing Engineer's Handbook and the Audio Mastering Handbook all grace my bookshelves. 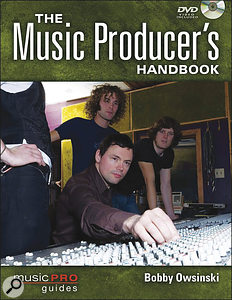 You might think that his list of handbooks was already exhaustive, and for that reason I wasn't expecting another one to deliver much that is new — but I was pleasantly surprised. In these days when it seems like anyone with a laptop and a DAW calls themselves a 'producer', Owsinski's The Music Producer's Handbook (Hal Leonard, ISBN: 1423474007) thankfully explores much more than just the tools and practical techniques of recording, mixing and mastering. Owsinski shines a light on the often overlooked art, craft and business of production in the traditional sense, covering issues as diverse as working with artists, engineers and 'industry' people, how recording budgets work (or don't!), playing midwife to someone else's artistic vision, evaluating and tweaking arrangements and instrumentation — I could on.

There have been many books on this subject before, but most were written at a time when the recording industry barely resembled the one within which a producer has to operate today. The Music Producer's Handbook, on the other hand, is bang up to date, and is thus realistic about the current state of the industry. It follows the format of the other books in the series, with Owsinski himself writing the bulk of the book, before featuring a number of producer interviews. Both parts of the book are well worth reading.

It's no magic wand, of course: as with any such resource, you need to apply the suggestions made within it to your own circumstances if you're to reap any rewards. That said, the bundled DVD is useful, and the advice contained within these pages is pretty good — more so for the less experienced, perhaps, but there's still plenty in here for everyone. Consequently, this book gets a thumbs up from me!