Synthogy's Ivory piano library was met with enormous acclaim on its release. Can its successor improve on that legacy? 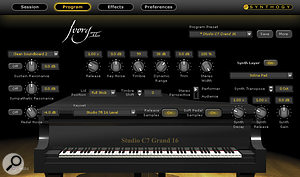 The heart of Grand Pianos: the Program page. This is where you load, save and tweak sounds.

Ivory II Grand Pianos is the principal product in US piano‑sampling specialists Synthogy's line‑up. It sits alongside their specialist Italian Grand and Upright Pianos libraries, and the whole range builds on the original, very successful Ivory, which was reviewed so positively in the March 2005 issue of SOS.

One thing's for sure — Ivory II Grand Pianos should appeal to a range of users. It runs on Mac and PC, as a stand‑alone application or as an Audio Unit, VST or RTAS plug‑in for your DAW. The pianos are a Bösendorfer 290 Imperial Grand, Steinway D Concert Grand and Yamaha C7 Grand (think jazz, classical and pop respectively, if you're into generalisations). And while a good 82GB of disk space is used up by a full installation, you're not bound to install all the piano types. Nor does Ivory II force you to use all available bells and whistles; there are plenty of options to limit processing and memory demands for those moments when your computer is about to topple over. Compared to some piano instruments, too, there's also quite good scope for creative sculpting of the basic sounds.

Ivory II Grand Pianos presents the same user interface whether it's running as a plug‑in or as one of the stand‑alone applications 'Ivory Standalone' on the Mac and 'Ivory Cantabile' on Windows.

The heart of Ivory II is the Program page. Festooned with knobs and pop‑ups for dreaming up your own piano presets, it also has a straightforward preset-management section at top right. Click the pop‑up menu and you get a full‑size browser overlay. Synthogy provides 16 factory presets for each piano type, most of which utilise the full capabilities of the playback engine. These include sample 'keysets' with 16 or 18 velocity layers, key release and una corda sample sets, plus sustain (damper pedal) resonance and sympathetic resonance. The last two are DSP‑based processes, and you can adjust both the level of what they contribute and the soundboard characteristics. If you need to make Ivory II run leaner, the additional sample sets and resonances can be disabled, and a separate Keyset browser gives access to sounds with fewer velocity layers, or alternative velocity mappings.

Another trick up Ivory II's sleeve is a Synth layer, which lets you layer a gentle 'halo' pad on top of your chosen piano. Used unwisely, it can be nauseatingly sickly, but actually it's a handy thing to have available. The eight good pad sounds available, plus associated level, transpose, decay and release controls, point to this being somewhat more than an afterthought. 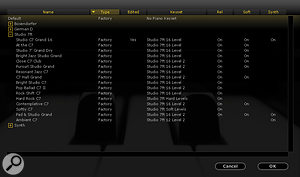 A full‑size browser pane temporarily replaces the graphical interface when you're searching for Program, Session and Effects presets.

Part of a preset are its effects settings, and you adjust these, or load and save new ones, in the Effects page. Ivory II is provided with a three-band EQ (shelving LF and HF, parametric mid), Chorus, and Ambience. These are arguably of more use to the stand‑alone Ivory II than to the plug‑in, but either way it's nice to have these useful treatments on tap. What's more, they take only a very small slice of your processor. The Ambience section is comparatively well specified, offering seven algorithms, from 'Room' through to a slightly trippy 'Curved Space', along with HF damping and up to 100ms pre-delay.

A new feature in Ivory II is the Session page. It's not compulsory to use this, but you'd be mad not to at least explore it. What you find there are loads of performance parameters: polyphony (up to 160 voices), pitch (plus or minus four octaves), tuning and transposition, as well as a highly configurable velocity-mapping system and a toggle switch to enable half‑pedalling if your controller keyboard has a continuous‑type damper pedal. In one way, you can think of these as 'global' parameters. But because you can load and save entire Session presets, which can include Program presets, it can also feel like a powerful snapshot feature that could prove its worth in a live situation, particularly. 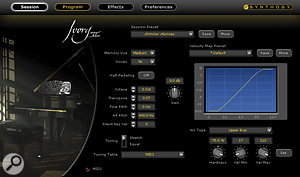 The session page gives you global parameters, or a powerful 'Performance' preset system, depending on how you like to work.

Clearly, for Ivory II's designers, bigger is better. 'More than 77GB' is a lot of samples for just three pianos, and this creates an enormous expectation of quality. I mean, this thing had better be good, if only to justify the installation effort! So I'm happy to report that Ivory II is good: extremely good, in fact.

The fundamental sound quality is beyond question; this is the state of the art as far as piano sampling goes, with an ideal blend of weight and presence. Mechanical noises are noticeably there, but never too dominant. Velocity switching is impossible to perceive in context, even with presets that have only four layers. Actual dynamic response is remarkably good; the progression of scale and tone is outstanding, and the quietest timbres are beautifully captured, especially in the case of the Steinway D. The three pianos are distinctly different in character, but all exude class and authority.

These days, though, it's not enough to just get nice recordings of individual notes: we expect our sample libraries to live and breathe in the same way as a real instrument does. In this respect, Ivory II also delivers, helped in no small measure by the sustain and sympathetic resonance features. Perceptible mostly on a subconscious level, the additional harmonic content they continually generate creates a sense of cohesion and believability. Some other libraries use additional sample sets to achieve the same thing, but Ivory II's DSP‑based approach is both successful and very flexible. The possibility of choosing between 11 soundboard types is not gimmicky — it can help bed your piano into a mix, and is an interesting creative feature in its own right. 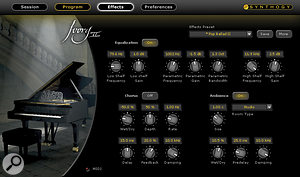 Ivory II incorporates some useful effects processors. The reverb is surprisingly good, and requires very little CPU power.Then comes practicality. It's all very well having sample libraries that run to dozens of gigabytes, but they can feel more of a hindrance than a help if they devour your processor in one go, or their sounds take creativity‑sapping minutes to load. You still have to find the disk space for Ivory II, of course, but in every other way it is absolutely not a resources hog. On the contrary, it runs amazingly lean. All my testing was done on a trusty white MacBook nearly three years old and with just a Core 2 Duo chip. At low latencies I saw at worst about 40 percent processor usage from the stand‑alone application. In Presonus' Studio One DAW software, running with a 256‑sample buffer, I saw no more than about 30 percent processor use, even with the most complex presets that had all resonance DSP and effects enabled. The CPU hit remains constant regardless of polyphony assigned, and varies very little according to the actual number of voices used. If you need to run more efficiently than this, disabling sympathetic resonance DSP cuts processor use to apparently negligible levels — this is one seriously efficient playback engine. Initial instantiation of the plug‑in version took about 20 seconds, with load times for the 16- or 18‑layer pianos taking 20‑25 seconds. It'd be quicker on newer hardware. (Note to self — must start saving for new laptop...)

As for stability, I encountered no problems at all. No glitching or other nasties, and no crashes. The user interface was always clear and responsive.

So is there anything not to like? The key-noise parameter is rather a blunt tool, seemingly applying a localised EQ boost or cut that affects more than just key noise. Also, while it's good that Ivory II supports tuning tables via various MIDI methods (such as Bulk Tuning Dump) and text‑based look‑up files, it's a shame that a few of the latter weren't also included as part of a standard installation. At least there's some clear guidance about how to create them manually in Ivory II's user manual. Then there's that iLok (see box above). While I personally don't have a problem with the concept of copy‑protection dongles, they can be a liability in a live situation.

I've reviewed quite a number of piano sample libraries over the years, and some top‑flight stage pianos too. All of them have been good in their own way, but only a very few have felt as mature and musically rewarding as Ivory II Grand Pianos does. It ticks all the boxes: sound quality, playability, flexibility. And then it ticks a few more: reliability, efficiency, ease of use. This is industry‑standard, production‑ready software that's a joy to have around. There's little else to say. Just go and play it...

Coming closest to Ivory II's breadth and cost is Best Service's Galaxy 2, now three years old, which trades a Blüthner baby grand for Ivory's Yamaha. Native Instruments' Classic Piano Collection is hazy about exactly what pianos are offered (probably Steinway, Bösendorfer and Bechstein grands, plus an upright), but at 11.5GB this is a much smaller and more limited library. Modartt's Pianoteq 3 is the most fully featured modelling‑based piano — flexible, and good for when you don't have the disk space, but heavier on the CPU. Otherwise it's big‑money individual piano instruments like the Garritan Steinway Concert Grand and VSL Vienna Imperial.

No heavyweight piano library is going to run on your iPhone (yet...), but Ivory II's requirements are not so bad.

Minimum hardware spec is a 2GHz dual‑core PowerPC G5, a 1.8GHz Intel Core Duo, or a similar equivalent processor as a minimum. You'll also need at least 1.5GB RAM and 22GB free space on a 7200rpm hard drive. As with all libraries of this nature, you'll have a much nicer time of it if your computer is better specified, but on the face of it, at least, owners of older computers are not excluded. Software requirements are OS 10.4.11 or later, and Windows XP SP2 (32-bit), Vista (32- or 64-bit) or 7 (32- or 64-bit).

Installation is from 11 dual‑layer DVDs, so you can't do without an optical drive. While the hours‑long process of feeding all those future coasters into your computer is never going to be scintillating, I do commend Synthogy for making it as trouble‑free as possible. You can choose to put the bulky sample files where you like, such as on an external drive, and no subsequent fiddling around with aliases or shortcuts is required. Additionally, on the Mac there's a dedicated installer application that lets you pause installation if, for example, you should suddenly need your optical drive for another task, or you want to spread it out over a couple of days.

What will be less welcome for some is Ivory II's reliance on an iLok USB dongle for copy protection, especially as one isn't included in the box. Still, the on-line registration and licence-transfer procedure is at least straightforward, and very clearly explained.

A delight to play live or use in a sequencing environment, Ivory II Grand Pianos is a stunning virtual instrument ready for real‑world use.