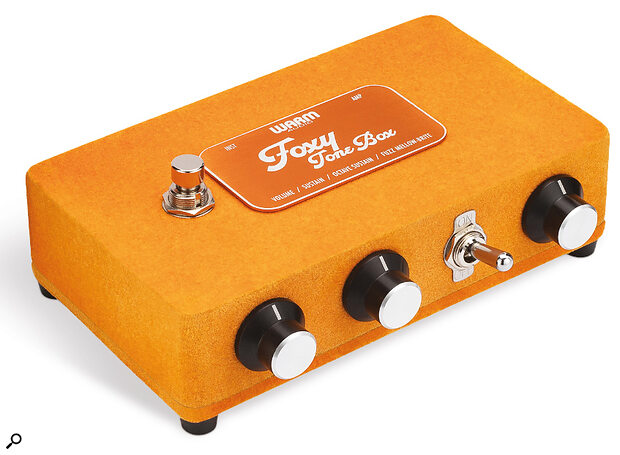 Warm Audio’s Foxy Tone Box claims to be an accurate recreation of one of the most sought‑after vintage fuzz pedals of all time. We’re not told exactly what pedal that is but the clues all point to the 1970s Foxx Fuzz. Its circuit is based around Fairchild NOS 2N3565 germanium transistors and there’s a switch to bring in an upper octave. That octave facility and the ‘Foxy’ part of the name suggest a Jimi Hendrix connection, and we know that the whining octave solo on Purple Haze used an early version of Roger Mayer’s Octavia pedal; it seems logical that the original Foxx Fuzz built on that concept. Several companies, including Orange, have issues their own take the original ‘fur coat’ fuzz unit, but Warm Audio claim to have created an exact replica ‑ and I’m not just talking about the velvety, fuzzy ‘flock sprayed’ lurid orange finish! For example, they went to the trouble of sourcing the original transistors.

Power comes from a 9V battery or standard 9V PSU (not supplied). There’s a power LED on the back but, as with the original, no LED to tell you if the pedal is active; your ears won’t have any trouble telling you that! Clicking the footswitch toggles between the effect and a simple hard bypass. The controls are fairly straightforward, with knobs for Volume, Sustain (drive) and Tone (Mellow/Bright) plus a hefty toggle switch to bring in the octave.

I recall dissecting an early octave box to see how it worked and found that the octave was generated simply by full‑wave rectification of the input signal after a little filtering, so I suspect something similar is employed here.

Being germanium‑based, if you want the authentic tonality from the Foxy Tone Box it should be connected first in line, before other pedals, as the output impedance of the guitar is a contributing factor. There’s plenty of authentic tone to be had, too, as well as a useful degree of flexibility.

Flip the octave switch and you get that instantly familiar Purple Haze guitar solo sound with the added octave harmonics.

At lower drive levels, the Foxy Tone Box cleans up well, albeit with a distinctive mid‑heavy tonality, even with the tone control maxed out, so it can double as a mid‑centric overdrive if you don’t want full‑on fuzz. At higher gain levels, the tone sharpens up to deliver a convincing Billy Gibbons tone, while cranking a bit further gets you into Hendrix territory. Flip the octave switch and you have that familiar Purple Haze solo sound with the added octave harmonics but, if anything, less strangled‑sounding than the original. The octave effect also stays stable when playing chords.

We’re used to a bit more functionality on pedals these days, and it might have been nice to have the octave variable in level — but then that wouldn’t have been an authentic clone, would it? If you need a pedal that can do classic fuzz without splutter, raunchy drive and octave fuzz, this reincarnation of a classic is hard to beat.