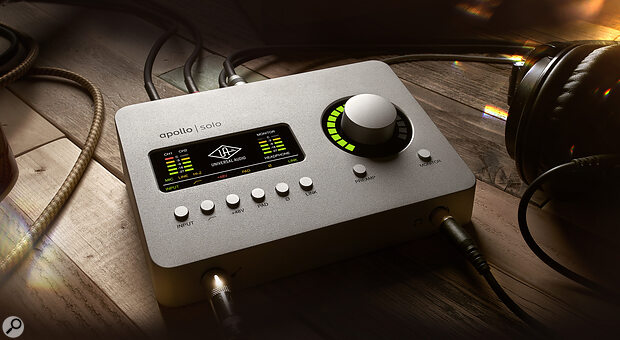 The Apollo Solo gives you UA quality in a bus‑powered box.

When Universal Audio’s range of Thunderbolt audio interfaces received a major overhaul in late 2018, one product escaped unscathed. The bus‑powered Arrow survived not because it was the smallest and most easily overlooked of UA’s interfaces, but because it was only a few months old at that point. But now that the Apollo X range has been firmly established, UA are rounding up the stragglers, and thus the Arrow has been superseded by the Apollo Solo.

Except for its now bearing a smart grey livery rather than the Arrow’s black, the Apollo Solo is identical to its predecessor, and in fact UA’s firmware updater thinks it’s addressing an Arrow. Its two mic/line inputs are compatible with UA’s Unison modelling technology, and it sports a single pair of line outputs on quarter‑inch jacks. The first input path also has a separate quarter‑inch socket for plugging guitars into, and another jack carries a headphone feed. The top panel is devoted to control and metering, and is dominated by a large rotary encoder with surrounding LED display. All audio specifications are the same as those of the Arrow, which means they are pretty much state‑of‑the‑art for a bus‑powered interface.

Like the Arrow, the Apollo Solo requires a Thunderbolt 3 connection, and is bus‑powered with no option to use a mains adaptor. This, of course, means you’ll need a Type C‑to‑Type C Thunderbolt cable, which regrettably is not included in the package. Earlier Thunderbolt connections are not supported even with an adaptor, as they don’t supply sufficient power, but I had no problem running the Solo from a powered OWC Thunderbolt 3 hub.

Things are pretty simple round the back of the Apollo Solo, with just a pair of quarter‑inch outputs and combi jack/XLR inputs.

Housing only a single DSP chip, the Arrow alone won’t really do full justice to your UAD‑2 plug‑in library at the mix. It’s designed more for the engineer or artist who wants to work on the road with a laptop, and the included DSP is sufficient to load up a couple of Unison plug‑ins for tracking through. To get proper value from your UAD‑2 plug‑ins, you’d then return to the studio to mix with a Satellite or a larger Apollo rig.

UA’s larger desktop unit, the Apollo Twin X, is designed to slot into multi‑Apollo setups as the ‘master section’, offering monitor control and talkback. By contrast, the Apollo Solo functions only as a solo interface. Daisy‑chaining with other Apollos is not officially supported, and it has no talkback or mute controls that could be used in a ‘master section’ role. This is a shame, as it can be bus‑powered from the spare Thunderbolt socket on a rackmount Apollo X, and is the perfect size and shape for a desktop monitor controller; and, unlike the Twin, it’s not hampered by a power supply as well as a Thunderbolt cable. Apart from that, though, there is not much to dislike about the Apollo Solo, and I’ll refer readers who want more detail to Paul White’s review of the Arrow in SOS May 2018.

The Apollo Solo will let you track vocals, guitars and other instruments through UA’s Unison modelled preamps and amplifiers, with no compromise in quality.

As far as Mac and Thunderbolt users are concerned, then, the switch from Arrow to Solo is a fairly cosmetic one, but it represents slightly bigger news for PC owners. Windows users have sometimes felt like the poor relations when it comes to UA hardware and software, which is partly down to the patchy take‑up of Thunderbolt among PC manufacturers. UA’s LUNA recording software is still Mac‑only at the time of writing, but the entire Apollo range including the Solo is now Windows‑compatible, and for PC users who don’t have Thunderbolt, there’s also a new Apollo Solo USB model.

The Solo USB is supported only on Windows, and connects to the host machine through a Type C port, but this time using the USB 3.0 SuperSpeed protocol. This doesn’t provide the same amount of bus power as is available on Thunderbolt 3, so the Solo USB requires an external PSU. Internally it appears to be identical to the Thunderbolt Solo, and the audio specs are exactly the same. Some variation in low‑latency performance compared with the Thunderbolt Solo is also to be expected, but I was not able to test the USB version, and of course UA’s system is designed such that direct monitoring via the Console utility is used where possible. 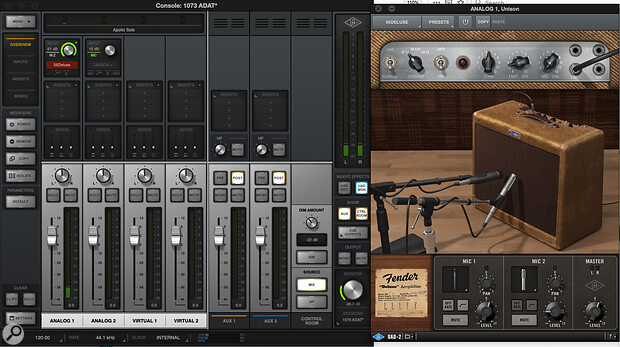 The Apollo Solo’s single DSP is sufficient to track through Unison‑enabled plug‑ins such as UA’s excellent Fender Tweed Deluxe.

If you already own an Arrow, there’s no reason to upgrade to the Solo unless you need USB connectivity on Windows; and if you want to extend a studio‑based Apollo X rig with a desktop monitor controller, you’ll need to step up to the Twin X. But if what you want is a good‑sounding bus‑powered interface to take on the road, the Apollo Solo will let you track vocals, guitars and other instruments through UA’s Unison modelled preamps and amplifiers, with no compromise in quality. It may be the baby of the Apollo family but it’s a pretty mighty baby!

UA’s rebrand of the Arrow brings it into line with the rest of the Apollo X range and adds a welcome USB version for Windows users who don’t have a Thunderbolt 3 port.