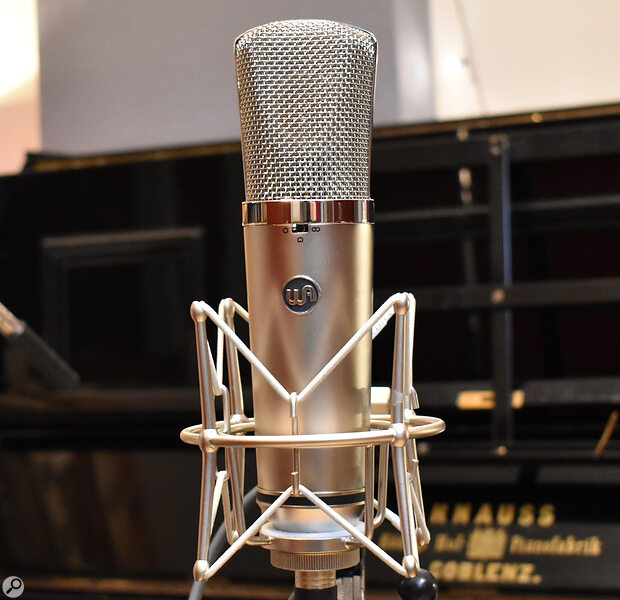 Warm Audio’s latest mic takes on the venerable Neumann U67. We put it to the test!

Warm Audio need little introduction these days. Their mission of bringing down the price on classic gear designs has delighted home and project studio owners, whilst also gently ruffling the feathers of us gear snobs, as well as some boutique pro audio manufacturers. They’re a company that have gradually won me over though, and I found their recent WA‑87 R2 microphone to be very impressive indeed when I reviewed it earlier this year (SOS May 2021).

I was intrigued, then, to see if their attempt at emulating the qualities of another high‑end German microphone would be equally successful. The Neumann U67 is, regrettably, not a microphone I managed to acquire when vintage mics were readily available at around a third of the price they are now. I have had the pleasure of using one on several occasions, though, and they share many qualities of the U87 (which I do own), but with a slightly softer, more forgiving top end and a little additional weight (I’m trying to avoid the word warmth!) around the lower midrange area. Many revered engineers, including the late, great Al Schmitt, list the U67 as their all‑time favourite microphone, so the option of having a convincing‑sounding version at a fraction of the price of an original is very enticing indeed!

While I don’t have a U67, my studio does have a modest collection of high‑end equipment including some other vintage Neumann mics. Warm Audio products sometimes haven’t compared well with my vintage mics in the looks department, but that wasn’t the case here: the WA‑67 is a smart‑looking mic that most clients would think looks like the real deal. Under the hood is where the real care has been taken though, and Warm Audio obviously understand that the critical components of the mic need to be of a high enough quality to stand a chance of comparing to the original models. In the case of the WA‑67, these include a custom‑made brass capsule, the same EF86 pentode tube as found in the original, a custom Lundahl transformer, and high‑quality components throughout the internal circuit.

Being a tube mic the WA‑67 requires an external power supply, and the WA‑67 is supplied with a no‑frills power supply box that just about manages to capture the feel and magic of setting up a vintage microphone. While some find the need for a PSU an inconvenience, others — like myself — still get a little kick out of it. It’s worth mentioning the power cable that goes from the supply to the mic: Warm Audio supply a premium 7‑pin XLR cable, made by Gotham Switzerland.

The WA‑67 is a large‑diaphragm capacitor microphone with three available polar patterns: cardioid, omni and figure‑8, just like the original. The mic ships with a cradle shockmount, which worked well throughout the review, and it also comes with a hard mount, which I didn’t need but is useful to have for applications where space is tight.

I think it’s important to mention that as we were in the middle of a Covid lockdown in the UK when I had the WA‑67, I didn’t get a chance to try the microphone on as many different sources as I normally do when reviewing equipment. I also didn’t have an original U67 at hand to make any direct comparisons. I did get a chance to try the WA‑67 on a couple of different singers though, as well as some instrument recordings, and I did use my 1971 U87 as a point of reference — and that’s a mic I’ve compared to a real U67 on more than one occasion.

The extra low‑mid warmth was clearly noticeable compared to my U87, and on female vocals, in particular, the top end felt clear and flattering with a nice ‘rounded‑off’ feel.

The WA‑67 performed excellently on both vocal sessions I used it on. The extra low‑mid warmth was clearly noticeable compared to my U87, and on female vocals, in particular, the top end felt clear and flattering with a nice ‘rounded‑off’ feel.

On room mic duties for drums and piano, and with the mic in its omnidirectional mode, it sounded spacious and smooth, again with that low‑mid area very well represented — almost too much so, perhaps, but nothing that couldn’t be notched out a little in the mix.

The WA‑67 is an impressive‑sounding microphone, and for the price, it is quite remarkable how well it compares to much more expensive alternatives. My impressions of the real U67s that I’ve used have been of a soft but clear top end, and the WA‑67 seems to very much tick that particular box. I don’t recall the lower midrange area being quite so full‑sounding on the original, and certainly when compared to my U87 the difference was not subtle. It’s great to have that body on many sources, but it can also make a male voice or acoustic guitar sound a bit flabby and have you reaching for the EQ.

All in all, though, this is another impressive addition to Warm Audio’s microphone range, and I can’t wait to see what fantasy microphone they’ll tackle next.

Another Warm Audio take on one of those classic German microphones that most of us cannot afford. The WA‑67 is an impressive‑sounding mic that offers a high‑quality ‘vintage’‑style sound at an affordable price.