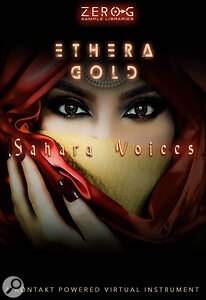 First up is True Legato, supported by two articulation switching keys that are outside the range of the samples. The GUI shows the note range for the instrument along with the articulation Key Switches in red. The True Legato feature is impressive and we’re told that it was not easy to achieve, each interval needing to be sampled in up to three different styles. Using MIDI‑velocity (0 to 95, and 96 to 127) allows the player to control which legato interval works best in any situation. Most of the sounds in this section are single musical notes but there’s the odd sample where the note develops into something more like a short phrase if you hold down the key,

Next up is an instrument based on short, Eastern‑style vocal phrases, but you also get a huge library of standalone vocal phrases organised by musical key and tempo in WAV format, which can be used within a DAW project without going via Kontakt. The phrases cover a range of styles from big and dramatic to gentle and haunting. If a bit of mysterious weirdness appeals, there’s also an Instrument based on reversed vocal phrases.

Sustain offers, as its name suggests, sustained vocal sounds, which can be changed in character using a number of articulation keys. These tend to be very mellow, smooth sounds ideal for playing pads or gentle melody lines. There’s also another instrument offering true legato, but this time incorporating more processing so the sounds end up being a little less natural but in a very musically satisfying way.

The phrases cover a range of styles from big and dramatic to gentle and haunting.

The various non‑phrase‑based playable vocal instruments cover a variety of vocal phonemes, including vowel sounds, and also include some Melisma examples where a short melody is sung over one syllable. Everything sounds wonderfully evocative, though I was tempted to dial back some of the reverb and delay as the presets seemed to be over‑generously treated in that respect. What comes over most strongly, though, is that when used to play a melody, the end result sounds surprisingly natural with very believable note transitions, especially when you overlap the notes slightly to force a legato response.

Moving onto the phrases, both those mapped as instruments and those supplied as WAV files are excellent, the majority following recognisably eastern scales. I was surprised at just how many phrases there were to choose from, even taking into account that in the WAV section there are repeated phrases performed at different speeds and in different keys.