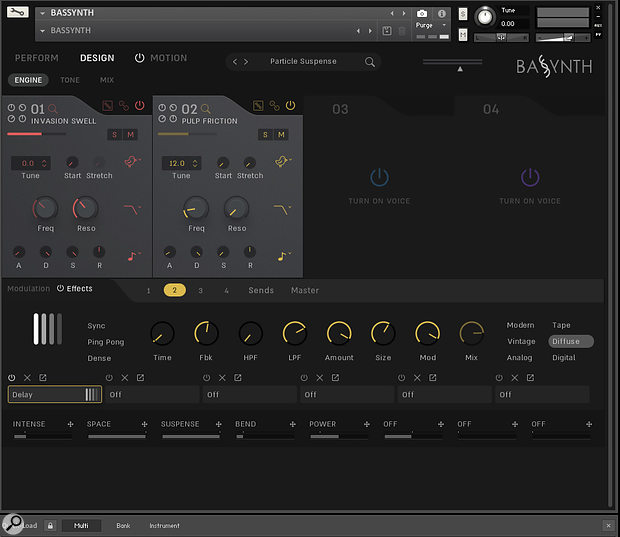 The clue is most definitely in the name — Bassynth is all about big and meaty bass sounds. Running inside the free Kontakt Player or Kontakt version 6.1, this sample-based instrument can layer up to four voices to provide rich mono bass parts, or it can be configured to use its voices polyphonically. There's also an eight-voice unison mode per voice.

Its 11GB core sample library comprises over 800 multi-sampled sounds, made up of 'real' instruments such as brass, winds and bass guitar, many heavily processed, as well as synthetic sounds, plus around 200 wavetables. So the instrument has a very wide palette to work with. We're told that the core sounds were recorded and designed in A-list studios using high-end analogue chains and mastering–grade conversion.

Where appropriate, samples are configured as 'round robins' to add natural variation to consecutive notes. Tools for morphing and transforming sound combinations really extend the range of outcomes that can be obtained from the core samples, and are found alongside all the more familiar synthesis tools such as envelopes, filters and modulation, that can, in most cases, be applied per voice. You get tag-based browsing, drag–and–drop Macros, a powerful effects system, and a library of over 290 presets sounds.

An X/Y Pad can be used to blend and morph up to 64 parameters at once, so you can easily set up very complex, evolving sounds. Eight Macro sliders are provided, and multiple parameters can be assigned to each one. Each Macro can be controlled either directly with a MIDI controller or using DAW automation. Bassynth is also NKS-ready, for integration with NI's Maschine and Komplete Kontrol keyboards. The Effects section follows a modular paradigm, with up to six insert effects per voice. Further master effects can be applied to the overall sound, and there are also two send effects. In all, there are 40 effect algorithms, including some IR-based effects, and covering all the usual distortion, filtering, modulation, delay and reverb bases, as well as transient shaping and more.

Modulation sources comprise three ADSR envelopes and four LFOs, in addition to Velocity, Key-tracking, Aftertouch and Pitch-bend, and there's also a polyrhythmic Motion Designer. Controlled by familiar-feeling graphical interfaces, separate Motion Designer step sequencers may be used to control each of the Macros, to create anything from slow sweeps to rhythmic progressions and polyrhythms. Each sequencer can be set independently for pattern, length, rate and smoothing. For performance, the instrument can be set to Mono, Legato or Poly voice modes, and there's a portamento setting too. A suitably named Slop feature adds some analogue–style random variation to the sound sources, also selectable per voice.

In short, there's a lot to explore! But while there's plenty of scope for deep-dive sound creation, there's no shame in taking a look inside the presets to see what makes them tick, and then making a few changes. The preset browser organises sounds by type, making it easy to find a suitable starting point. And despite the multitude of options, the designers have done their best to make operation intuitive with clear graphics and extensive use of drag-and-drop.

There are three tabbed screen views: Perform, Design and Motion. Perform shows the X/Y Pad while Design accesses the main synthesis elements. Motion brings up the eight Macro Motion Designer sequencers, and there are key controls shown along the bottom of the window as horizontal sliders.

I found it easy to modify patches, but building a sound from scratch does take a bit longer. Sonically, the preset bass sounds seem mainly to target the various genres of dance music, with lots of evolving, aggressive sounds in addition to the more TB-inspired square-wave fare, Taurus-like pedal bass, beefed up electric bass and FM percussiveness. The Motion Sequencer adds a lot of interest to sustained notes and also makes it easy to set up rhythmic bass grooves — and as long as you're up for some deeper editing, you can craft bass sounds to fit most genres. It's also possible to create higher-register polysynth sounds, but bass is where this instrument sets out its stall and it does so with confidence and authority.

Understandably, given the huge effects capability, my CPU load sometimes rose rather high, but you can always freeze or render parts to free up resources. And if in doubt, you could take the free demo version for a spin — this comes with a limited amount of content and just six presets.