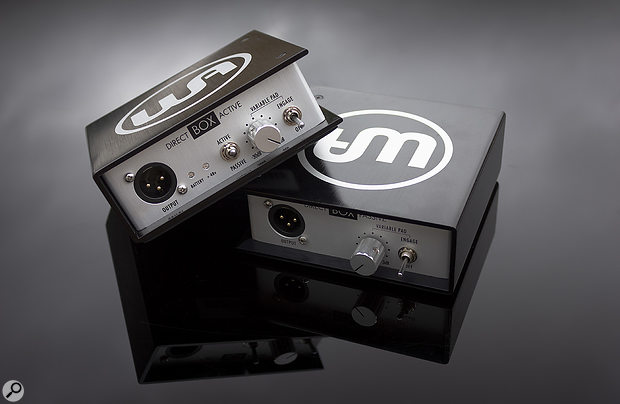 These gadgets offer more than the ability to patch your guitar or bass into a mic preamp!

Conceptually, a DI box is a simple affair, but in practice there can be more to it and today we can choose from a range of active and passive devices, designed to sound as transparent or characterful as we wish. If you want to know more about the pros and cons of the different options, check out Hugh Robjohns' article from SOS May 2013 (https://sosm.ag/prepare-to-di). Meanwhile, I'm going to focus here on the two newly released models from Texas-based manufacturer Warm Audio: their WA‑DI‑P is a passive device, whereas their WA‑DI‑A can operate in either passive or active modes.

Viewed from the one side, these two aluminium-bodied DI boxes appear identical. A hefty, overhanging, black outer cover wraps protectively around the sturdy silver-coloured chassis, the fascia of which carries the connectors and switches: a quarter-inch TS Input jack socket is joined by a paralleled Thru output; there's a switch for Amplifier or Instrument input levels; and further switches operate the balanced mic-level output's Phase (polarity) invert and Ground Lift facilities.

On the other panel, distinguishing between the two is easier — not only are their names painted here, but the WA‑DI‑A's Battery and +48V power LEDs and Active/Passive switch (which bypasses all that unit's active circuitry, effectively turning it into a WA‑DI‑P) also give the game away. The other features on this panel are common to both models: the balanced XLR output connector, and the switch and rotary control for the variable (-3d to -30 dB) pads. 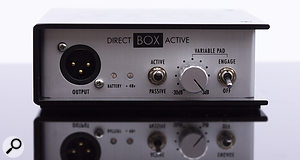 The WA‑DI‑A gives you the choice of active or passive operation — and in its passive mode the performance is identical to the slightly more affordable WA‑DI‑P. 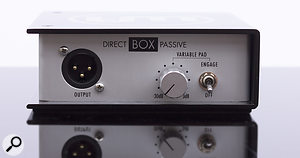 Internally, the WA‑DI‑P and the WA‑DI‑A are beautifully laid out, with high-quality discrete components perched on gold-plated PCB tracks, and a US-manufactured, custom-wound Cinemag transformer. The inside of the passive WA‑DI‑P seems positively sparse compared with its active stablemate, whose much more crowded interior is dominated by metal casing that forms a compartment for the two PP3 9V batteries. Phantom power takes precedence, but the batteries switch in automatically when it's not detected.

Despite the chunky, road-ready appearance, these boxes are probably more suited to the recording studio than the rigours of the road, simply because the outer cover's overhang isn't quite deep enough to fully protect the switches and control knobs. Another indicator that they may be intended for studio use is that six screws (two with different heads to the other four) must be removed from the WA‑DI‑A to access its battery compartment. Speaking of which, the little cable tie and the battery leads hanging across the bottom of the internal circuit board interfered with my initial attempts to slide the WA‑DI‑A's outer cover back into place — it's by no means impossible, but slightly shorter battery leads would improve things. On a more positive note, the foam pad that covers the bottom of both models means you should be able to place them on virtually any surface without causing damage.

The WA‑DI‑P can offer attenuation from input to output of up to -70dB — enough to cope with any real-world source you're likely to encounter.

The WA‑DI‑P and the WA‑DI‑A (in active and passive modes) have the same attenuation characteristics and input and output impedances, so they deliver identical output levels from a given input signal. Switching the input selector to the Amp position reduces the input level by -20dB, and engaging the Variable Pad gives you access to a further -30dB of attenuation (-3dB of which is insertion loss, hence the control knob's scaling of -3 to -30 dB). If you're already up to speed on passive DIs, you'll know that the transformer reduces the signal by around -20dB. Thus, the WA‑DI‑P can offer attenuation from input to output of up to -70dB — enough to cope with any real-world source you're likely to encounter.

At the flick of a switch, the Warm Audio DIs can be configured to tape the signal between a tube guitar amp's power stage and the speaker.I found I gravitated towards the WA‑DI‑A, partly since my go-to DI is a similar active, transformer-balanced Countryman Type 85, but also because making the choice between the passive and active modes was so simple; it can do everything the passive box can and more, for very little extra money. The (deliberate) choice of transformer means the sound of both boxes is slightly coloured — 'warmer' than, say, my transformerless Orchid active DI — but in a way I found pleasant. Both boxes delivered impressive sonic performances when used with keyboards, electric and piezo-equipped six-string guitars, a drum machine and electric baritone and bass guitars during my review tests. Of all these sources, it's inevitable that these boxes really shone on bass guitar, an instrument that almost always seems to benefit from the thickening effect of transformers.

More generally, as well as using these boxes for the traditional role of sending instrument signals over longer distances to a studio's mic amps, they could be useful to anyone recording through an audio interface who feels the built-in instrument inputs sound a little thin or 'clinical'. While I didn't get the opportunity to patch them between a tube amp's power-stage and the speaker, they should cope well in that role given the attenuation on offer (when the amp switch is engaged).

Choosing a DI is, to me, just as personal a choice as choosing a mic and, as with mics, the market isn't exactly short of passive and active DI boxes at a range of performance levels and prices. But more high-quality options and tonal choices are always welcome, and the bottom line is that, having spent some time with both of these Warm Audio DI boxes, I'd happily add either of them to my collection — and might just decide to get the WA‑DI‑A, which is my preference due to the convenience of switching between active and passive operation.

There are more DI boxes available than I care to count, and I can't possibly list them all here, but Radial Engineering produce a range of active and passive DI boxes that fill just about every available market niche in this price range. The Countryman Type 85 is possibly the closest equivalent available to the WA‑DI‑A, although it lacks the latter's active/passive switching, whilst the Telefunken TDP‑1 could be a worthy competitor to the WA‑DI‑P, albeit at a slightly higher price.

Both of these transformer-equipped DI boxes — one active, the other passive — deliver a high level of performance for an attractive price.