We look at two Max For Live devices that bring your step sequencing to life.

Step sequencing is usually a passive process: make a few settings and let it rip. This month we'll have a look at a couple of Max For Live step sequencers — Polyform from Spektro Audio and HEXO from K-Devices — that respond in real time to MIDI input. Polyform (www.spektroaudio.com) turns a monophonic note stream into polyphonic output. HEXO (www.k-devices.com) uses polyphonic input to change the pitch of the notes generated by its six sequencer lanes. For example, you could use Polyform to turn a monophonic solo or bass line into a chord part, and you could then use HEXO to 'arpeggiate' the chords in complex patterns or to create a six-track drum part with the chords assigning the kit pieces.

Polyform generates a sequence of as many as 16 events each of which is either a chord, a single note or empty. It steps through that sequence as it receives single MIDI notes or by following Live's clock. In either case it plays the currently selected event when it receives a note. Setting up Polyform can involve a bit of head scratching, so I'll start with some step-by-step basics:

1. Insert Polyform on an empty MIDI track. (You could insert it before the instrument on an instrument track, but targeting a separate track lets you capture Polyform's output.)

2. Select the Options tab in the View section (centre), and click the 'Create Recording Track' button (see Screen 1, above). This will create a new MIDI track named 'Polyform REC' next to the Polyform track, and Polyform's output will be automatically routed to the new track for recording — insert the playback instrument on that track.

3. Click the Generate button and you'll see eight 'events' in the top-right display. (The Length knob's range is two to 16 and eight is the default.) One horizontal bar represents a single note and three horizontal bars represents a chord, which may contain as many as seven notes. A blank slot represents an empty event. The currently selected event will be shown in white.

4. The settings in the Tweaks tab of the View section as well as the events' chord voicings are locked in once you've generated a sequence. The settings on the other tabs and the settings of the six knobs at the bottom right of the display apply in real time.

5. Arm the new track for recording and ensure the Polyform track's Monitoring mode is set to 'In' or that the track is also armed.

6. Select the Main tab in the View section and then play C3 repeatedly on your MIDI keyboard. Try it with other notes. Try it with Post Quantizer turned off in Polyform's Options tab.

As the generated sequence plays, small white dots appear above some of the white and blue Chord Quality buttons in the Main tab of the View section. The small white dots indicate which intervals are being played when chords are triggered. From left to right the buttons represent intervals of -12, -5, +3 or +4, +7, +12 and +15 or +16 semitones (octave down, fourth down, minor or major third up, fifth up, octave up, minor or major 10th up). Clicking any of the buttons will suppress its interval. The Key and Scale drop-downs at the bottom determine the root and whether the thirds are minor or major. The Options tab's Post Quantizer button controls whether the intervals are quantised to the selected key and scale. Finally, the Pitch Probability tab in the Tweaks section sets the probability that the incoming note will be used as the root for the chord or be played as an extra note.

One good way to get a feeling for the real-time controls is to create a mono instrument track, play a MIDI clip on that track and set the Polyform track's input to the MIDI output from the instrument track — ie. use the mono MIDI clip to step the Polyform sequence. Start by clicking the Note button. It will change to 'Clock' and the sequence position will now conform to the Clock Rate setting on the Options tab. Events will still be triggered by incoming MIDI notes, but now the position in the Polyform sequence will change in sync with Live's MIDI clock. Lowering the Density will thin things out and Delay will shift the output by the indicated number of 16th notes.

Step sequencers are an alternative to using MIDI clips to feed Polyform, and you'll find a variety of them covered in the February 2019 Live column. Spektro Audio's ACDGEN step sequencer is a good match for Polyform. As always with generated material, capture Polyform's output and edit the results.

HEXO is a six-lane step sequencer. Each lane plays a single pitch, but you can use MIDI input to change the pitch assignments. Lanes have independent lengths (two to 32 steps) and resolution (quarter to 64th notes with triplet or dotted note options). You can randomise almost everything on a per-lane basis or for the whole pattern. That includes note count and placement, note velocity and duration and the probability of each note's playing. Each lane also has its own delay, velocity, length and 'bend' (speed–up/slow–down) scaling. You can save four snapshots of the full configuration for manual or random recall.

You could use Polyform to turn a monophonic solo or bass line into a chord part, and you could then use HEXO to 'arpeggiate' the chords in complex patterns or to create a six-track drum part with the chords assigning the kit pieces.

HEXO's RIFF and ARP playback modes affect MIDI input handling. In RIFF mode, the lanes are labelled on the left with note names. When MIDI input is enabled by clicking the keyboard icon above the note names, incoming MIDI chords set the lane notes from the bottom up — one note sets only the bottom lane, whereas a six-note chord sets all lanes in the order the notes were received. In ARP mode, the lanes are labelled in semitone intervals with the bottom lane always set to '0 st.' In ARP mode, HEXO only plays when at least one note is held, and all semitone settings are relative to the first note received. Both the ARP and RIFF settings are saved with snapshots.

Sequencers with note lanes are typically associated with drums and percussion — one lane per kit piece. Although HEXO works well with monophonic and polyphonic pitched material, percussion is a good way to get to grips with it. Start with a couple of empty MIDI tracks, insert HEXO on one and your favourite 16-pad Drum Rack on the other. I've used the 707 Core Kit from Live's Core library in this example.

Screen 2. The RandomAll button generated the six-track HEXO pattern. Different MIDI notes were assigned to the lanes using the MIDI clips shown at the left. 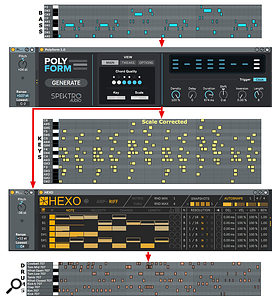 Screen 3. A bass clip fed to Polyform generates a keyboard clip which is then manipulated by HEXO to produce a drum clip.Set the Drum Rack track's input to the HEXO track's output. (You could place both on the same track, but as with Polyform, using separate tracks lets you capture the MIDI data generated by HEXO.) Click HEXO's RandomAll button to generate a sequence. In RIFF mode, with keyboard input enabled, play and hold C1 and then play and hold any five keys above D#2. All lanes except C1 will now be outside of the range of a 16-pad Drum Rack, so you'll hear only the bottom lane. To get a feel for changing lanes, play and hold C1 and play another note below E2. That will bring the second lane into play. Add more notes below E2 until all six lanes are triggering sounds. You can experiment in the same way using MIDI clips on the HEXO track as shown at the left in Screen 2. When you have a drum mapping you like, shift-click one of the four Snapshot buttons to save it. Generate three more snapshots in the same manner and then turn on AUTOSNAPS and let HEXO do the drumming.

You can have a lot of fun stacking sequencing devices, but you'll usually need to fiddle with the device settings as well as do some editing of the captured clips. In Screen 3 a 12-bar bass clip (top) is transposed up two octaves to feed Polyform. Polyform, with pitch-quantising turned off, transforms the bass clip into a polyphonic keyboard part (middle) that has been pitch-quantised using Live's Scale effect. Polyform's output (not pitch quantised) is restricted to the C4 octave and transposed down three octaves by Live's Pitch effect before feeding HEXO to set the pitches of its six note lanes. HEXO in RIFF mode, with AUTOSNAPS enabled, generates the drum sequence (bottom). Different passes of the source clip generate different sequences from both Polyform and HEXO. As mentioned, the captured MIDI clips will benefit from some judicious editing.