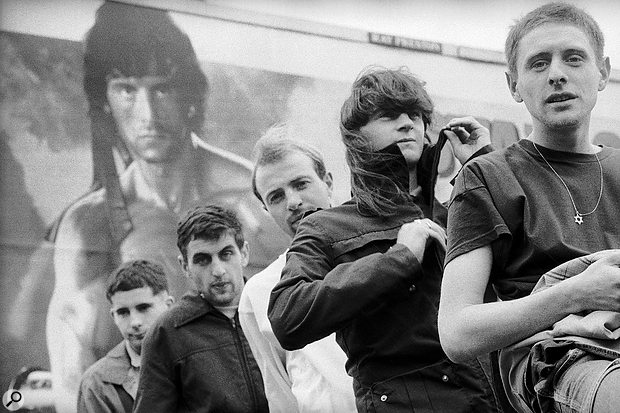 Much vaunted as a fusion of indie and dance music, Happy Mondays' joyous version of 'Step On' is greater than the sum of its parts.

From the opening bars of its housey piano riff, loping beat and Shaun Ryder's bizarre but rousing cry of "You're twisting my melon, man... call the cops!", 'Step On' by Happy Mondays is still one of the most distinctive tracks of the '90s. The Manchester band's biggest-selling single and a number five hit in the spring of 1990, it was the result of a highly unusual creative arrangement which saw Paul Oakenfold and Steve Osborne — previously responsible for groundbreaking and influential remixes for the group — being invited to take full charge of their production.

Osborne remembers the February 1990 sessions for 'Step On', at Eden Studios in West London, as having a suitably party-like atmosphere. "That session is still my favourite," he says. "It's unbeatable. Things were happening all the time. Most of the time there was just a line of blokes at the back of the wall dancing and getting into it. That's never happened to me since then. It was a really exciting three days. An amazing time."

How Oakenfold and Osborne came to produce Happy Mondays was via a circuitous route through previously uncharted territory. The famously unruly and drug-fuelled band had already made two albums — Squirrel & G-Man... (1987) with John Cale and Bummed (1988) with Martin Hannett — and had a well-deserved reputation for operating on the edge.

Back in 2006, talking to Sound On Sound, Cale described the sessions for Squirrel & G-Man... as being "very rickety. Really hilarious. It was like holding onto a bar of soap in the bathtub." The legendary Martin Hannett (Joy Division, Magazine), with his tech-exploring, enveloping-pushing methods and warped and mischievous ways of directing bands in the studio, proved more than a match for Happy Mondays on Bummed. "He was as mad as we was, Martin," Shaun Ryder told this writer in 2016. "He was still a kid, y'know. He didn't mind getting off his face."

Post-Bummed, though, the UK indie rock scene was rapidly changing and by 1989, the influence of dance music and particularly acid house was creeping in. Happy Mondays and their Factory Records boss Tony Wilson were ahead of the curve in this respect, commissioning remixes of the band's tracks that would take their music out on to the dancefloor. 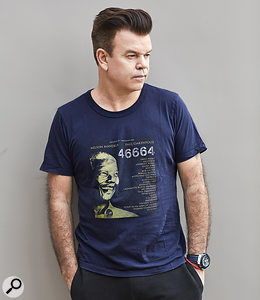 Paul Oakenfold.As a DJ, Paul Oakenfold had been instrumental in bringing more eclectic sounds to British clubs. Following a trip to Ibiza in 1987, he'd returned to the UK with a plan to launch a club night based on the diverse mix of styles he'd heard on the Balearic island, where DJs blended house music with surprise selections from the likes of the Waterboys and Peter Gabriel.

By 1988, Oakenfold was running the Spectrum night at Heaven in London and moving into remixes, most notably the Latin funk-influenced 'Jibaro', as a member of the band Electra. It was a record regularly played at the Hacienda in Manchester and consequently a favourite of the members of Happy Mondays.

"'Jibaro' was inspired by my visit to Ibiza," Oakenfold remembers today. "It was a true Balearic track. It was so influential because it was kind of the first true Balearic track." Soon, Oakenfold was receiving numerous commissions for remixes. "The move from DJ'ing to producing was an easy transition," he says, "as my father was a musician and I was very much around making music all my life."

Before long, Oakenfold was looking for a co-producing partner to team up with in the studio, and met Steve Osborne through a mutual friend. "Steve Osborne is a great producer in his own right," Oakenfold enthuses. "Our collaboration worked so well."

By 1988, Steve Osborne was already a highly experienced engineer, who'd started out by dabbling in recording bands on Portastudio and then eight-track, after dropping out of university in Kent where he'd been studying electronics. "I thought I might learn how to build an amp or a synth," he laughs. "I always wanted to do music really, so I was there for the wrong reasons." 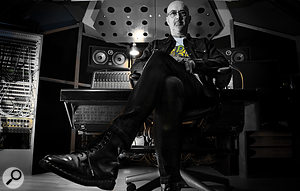 Steve Osborne.After five years on the dole, he managed to get a trial as a tape-op at Trident Studios in London's Soho, where he learned how to operate an SSL. After Trident was sold, he began engineering for Jolley/Harris/Jolley, a team of producers calling themselves Reproduction and specialising in pop and soul remixes for the likes of Mica Paris and Chic.

The subsequent teaming up of Osborne and Oakenfold was a perfect arrangement for both, the former being not just an engineer, but also a producer, programmer and musician, while the latter contributed DJ'ing skills and a virtually unrivalled knowledge at the time of what worked and what didn't on the dancefloor.

"Paul was out there in the clubs," says Osborne. "He knew what the market was. I couldn't have been doing what I was doing without him and he couldn't have been doing what he was doing without me. He would spend a lot of time just going through 12-inches and keeping up. He'd be thinking about what was happening in the clubs. Things were changing so fast and he was on top of that.

"But even though Paul comes from a club background, he was really into bands. I come from more of a band background, but I really like grooves. If I'm producing, the groove is absolutely paramount to what I'm doing."

"The direction of the rhythm is where I would always start when remixing or producing," says Oakenfold. "And then I would bring that to Steve and that would be our starting point moving forward."

"Back then when we were remixing, it was all on tape," Osborne points out. "So, when it got to the point of doing the mix, I would be jamming on the desk and putting stuff down to half-inch. We'd kind of pick bits out and edit them together and we'd gradually make the mix. So, it would just be, like, put a bit down, edit it in, put another bit down, edit it in. Both of us together getting the arrangement right and the right feel."

Eden Studios in Chiswick soon became their remixing HQ, with its Studio One at the time boasting a 6056 G-series SSL console. The duo's first major remix was of Happy Mondays' 'Wrote For Luck' from Bummed. "Obviously, Paul was playing in Manchester at the Hacienda all the time," says Osborne. "He'd met the band, knew the band, so it very much came through that."

One of Oakenfold's initial inspirations for what would eventually become the hugely influential 'WFL (Think About The Future)' remix was, strangely enough, a 12-inch reworking of French world music band Les Negresses Vertes' 'Zobi La Mouche' that Osborne had in fact worked on. "When we did 'Wrote For Luck', Paul came in with that," Osborne recalls. "He said, 'I really like the sequencing on that remix.' I'm like, 'Well, I did that.' So that was one of the references and I think the sequencing was quite similar."

Remixing could be a tricky business technically back in 1989 and the days of Roland MC-500 sequencers and Akai samplers. For 'Wrote For Luck', Factory sent Osborne the Martin Hannett-produced two-inch master tape, which had no click track or SMPTE code, forcing him to generate a clock using a Friendchip SRC MIDI Synchroniser.

"There was no click track on the tape so I had to sort of make a click track out of the drums," Osborne explains. "If you put the track in a computer now, you'd see that it's moving all over the place. I'd take the kick and the snare and use delays and I'd just generate enough beats to get something constant.

"I'd EQ that and gate it, so it was as tight as possible and just as much like a click as a possible. You could feed that into the SRC on one side and then feed timecode into the other and it would generate a MIDI Clock. Then I'd feed the MIDI Clock into the MC‑500.

"I would've run the vocals off tape. But I would've sampled bits of guitar into the 950 so I could loop them. I played the bass in live and the Juno bass. A lot of the stuff I'd have played in live, just back on to tape."

'WFL (Think About The Future)' also featured samples from Prince's 'The Future' and NWA's 'Express Yourself', spun in from vinyl by Paul Oakenfold. "Everything is based on the rhythm that works in the nightclub," he stresses. "So, it was based around NWA and Prince."

"Paul did that live over the mix," says Osborne. "That was literally me on the desk, Paul on the decks, going straight down to half-inch. Doing the remixes then, we weren't automating, we were playing the desk, doing a dub thing, straight to half-inch. The half-inch was the point where you made the choices."

Though released on the flip side of a 12-inch single where Vince Clarke's remix of 'Wrote For Luck' featured as the A-side, it was the Oakenfold/Osborne version that became more famous, kickstarting the 'indie dance' genre. "No disrespect to Vince," Shaun Ryder stressed. "Brilliant, right? But Vince had fucking eight records in the charts at the time, and they all sounded like Vince. What Oakenfold and Osborne did was they loosened that up and broke it down. But it ended up on the B-side, and it took the smart DJs at the time who knew Oakenfold and respected him to flip that over."

Next, the pair were asked to remix Happy Mondays' follow-up single, 'Hallelujah', bringing in Andrew Weatherall and turning in a thumping reworking that sampled chanting monks and a snippet of US soul singer Tramaine exclaiming "hallelujah!", lifted from her 1986 track 'In The Morning'. Once again, the remix became better-known than the group's original. "[With] the remix of 'Hallelujah'," Oakenfold remembers, "the melody of the chant and the rolling drums were key."

"It was the same process, pretty much," says Osborne. "Andy Weatherall came in with the 'hallelujah' sample." It was Osborne's idea, however, to patch Shaun Ryder's vocal through a Bel phaser for added trippy effect. "Shaun's got that really smoky sound and I just wanted to enhance that and make it as smoky as possible. It's one of those things when you're working with a band where you go, 'Ooh, that effect works on his vocal.' Then that becomes a thing you always go to."