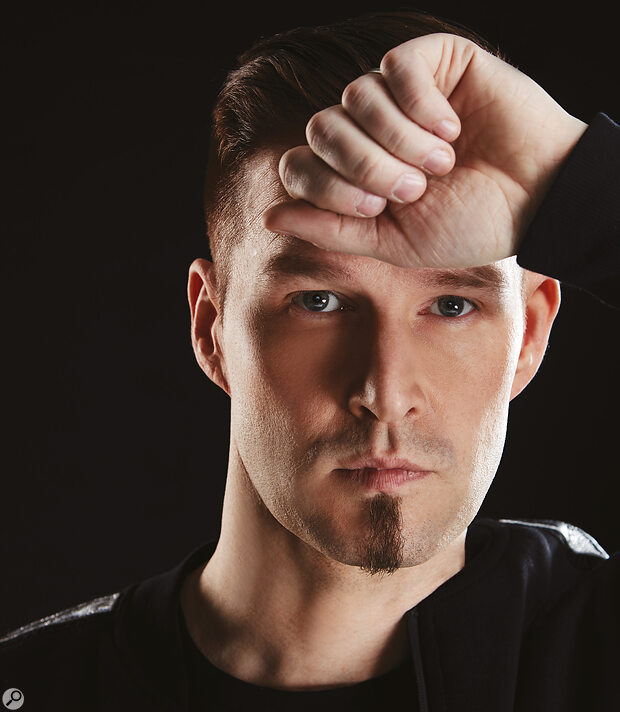 Darude’s 1999 dance hit has taken on an extensive and often surprising life of its own.

Described by its creator Ville Virtanen AKA Darude as “one of the best‑known unknown tracks in the world”, enormous 1999 dance hit ‘Sandstorm’ may not be easily identifiable through its name alone. Nonetheless, its distinctively hooky and percussive, 16ths‑paced synth top line (Da‑da‑da‑da‑daa!) is recognisable the world over, not least through its heavy usage outside of the club scene, in films and video games and at sports events.

The wholly instrumental ‘Sandstorm’ was an international hit upon its release (reaching the Top 10 in 11 countries), but its appeal has proved enduring. More than 20 years on, its YouTube plays now top a staggering 190 million. However, the secret to its success remains something of a mystery to Finnish producer Virtanen himself. “My automated response for this is, ‘If you tell me, I’m gonna make a couple more,’” he laughs.

“There’s something about its simplicity,” he goes on. “Then there’s a lot of energy in it, and there’s no lyrics that could ruin it for somebody. It has very solid, good, easy drums. The beats are just strong. And, in the radio edit, from the first build on, it has the arpeggio that brings it tons of energy.

“So, I don’t know what the answer is,” Virtanen accepts. “It’s just some of those things I mention. But why such a big wide audience globally has taken to it, I have no fricking clue.”

Like many of the biggest dance hits of the ’90s, thanks to the proliferation during that decade of cheaper home programming setups, ‘Sandstorm’ began life as a bedroom‑made track.

As a teenager growing up in Eura, south-western Finland, Virtanen’s cousin had introduced him to the synth soundscapes of Jean‑Michel Jarre (particularly his 1981 album, Magnetic Fields). Virtanen’s interest in electronic music was further piqued when he discovered European dance music, particularly Italo Disco.

Then, when studying telecommunications at Turku Polytechnic, he discovered that it was possible to make electronic music of his own on a PC, using the rudimentary FastTracker 2 software program. “I was quite a late bloomer because I started making music when I was around 19‑years‑old,” he points out. “I sort of thought that I couldn’t make music because I didn’t have a live playing ability. But then I still loved music.

“So, when I started studying at this new school in Turku, a couple of new friends introduced me to tracker software. All of a sudden, literally over the course of a couple of days, I started hearing everything layered. I started realising that music is not this one big blob that you either like or not, and that’s it. I started hearing what it’s made of, like, single hi‑hats and claps and bass and piano. And I realised that I could do it myself.”

Virtanen took a scholarly approach to dance music, breaking down tracks by his favourite artists into their constituent parts. When it came to ‘Sandstorm’, the inspiration was a track by German DJ and production team, Sash!

“What I was doing in the beginning, I was taking other people’s tracks and studying them meticulously,” he explains. “I used to make these paper charts where I had four and eight and 16 or whatever bars. Like a DAW, basically, but on paper. I was analysing a track by Sash! and then recreating it with similar sounds, but different melodies.

“There’s a middle part on the track where there’s a rhythmic 16th‑type of similar thing that you hear in ‘Sandstorm’, except it wasn’t distorted. But the idea was sort of the same. I kind of copied the idea of the 16ths. The rhythm was different, but it was similar — like, short note, short note, long note, whatever it was.

“At that point, it didn’t sound I would say at all like the ‘Sandstorm’ lead because I was using a similar sound that the Sash! track had. It was a pretty crappy, dull 303‑ish, filter‑half‑closed mono eight‑bit sample, and quite unassuming.”

Virtanen filed the idea away with the many others he’d been messing around with and pretty much forgot all about it. “It didn’t go anywhere,” he says. “It didn’t inspire me at that point. I did end up creating the whole ‘Sandstorm’ riff, but I didn’t have chords for it. I just had the ‘Da‑da‑da‑da‑daa’ with a sound in FastTracker, and some other sounds, like a piano and a simple hi‑hat and clap.” 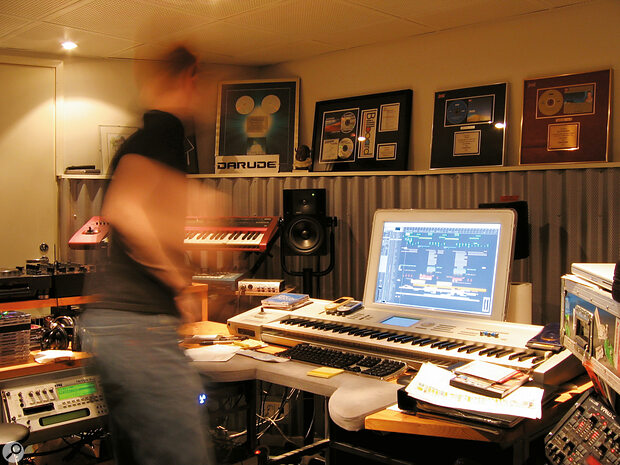 In the meantime, Virtanen hooked up with a friend, Wille ‘Weirdness’ Heikkilä, to make tracks together as Position 1, using Cakewalk Pro Audio. “My buddy had a version of Cakewalk that came with some synth back then,” he remembers. “Like ’96, ’97 maybe. He was seven years younger than I was and his dad had gotten him a Korg Trinity keyboard. And he had no clue how it worked, other than to select sounds.

“So, I was the one who kind of took over operating that because I knew how to read the English manuals. But at the same time, he let me use it. I kind of got my hands on a synth that way. We made music together and compiled the stuff as audio in Cakewalk.”

Virtanen soon progressed to using Cubase VST 32 on his PC, digging out his ‘Sandstorm’ ideas more than a year after he’d first sketched them. By this point he’d also started using Propellerheads’ ReBirth (with its early software recreations of the Roland 303, 808 and 909), along with his first bit of hardware, the Korg TR‑Rack (module version of the Trinity).

Transferring his FastTracker ‘Sandstorm’ project to Cubase, Virtanen experienced something of a eureka moment when he fed the lead synth line through a Quadrafuzz VST plug‑in. “I put the riff through that and it became what you hear on the single,” he recalls. “So, I always say that my career and my music‑making, it’s full of happy accidents.”

After burning the ‘Sandstorm’ demo to some CD‑Rs, Virtanen handed one to DJ/producer Jaakko ‘JS16’ Salovaara in a club in Turku. At the time, Salovaara was enjoying success with Finnish hip‑hop group Bomfunk MC’s. “The next day he calls me,” remembers Virtanen. “‘Dude, I like your track. Do you wanna do something with it?’”.

At the same time, Salovaara told Virtanen that he would like Darude to be the first artist signed to his new label, 16 Inch Records. Little over a week later, the two were together in Salovaara’s studio, fleshing out the ‘Sandstorm’ demo. “I went to his studio with my samples for ‘Sandstorm’ — that ‘da‑da‑da‑da‑daa’ riff, and MIDI for the chords. But we recreated almost everything else with his studio stuff.”

Salovaara’s synth and keyboard collection at the time included a Korg Trinity, Ensoniq ASR‑10 sampler, Nord Rack 2, and Roland JV‑2080 and JP‑8080 modules. The latter was in fact to lend its name to the still‑untitled track — ‘Sandstorm’ being the name of its start‑up patch. 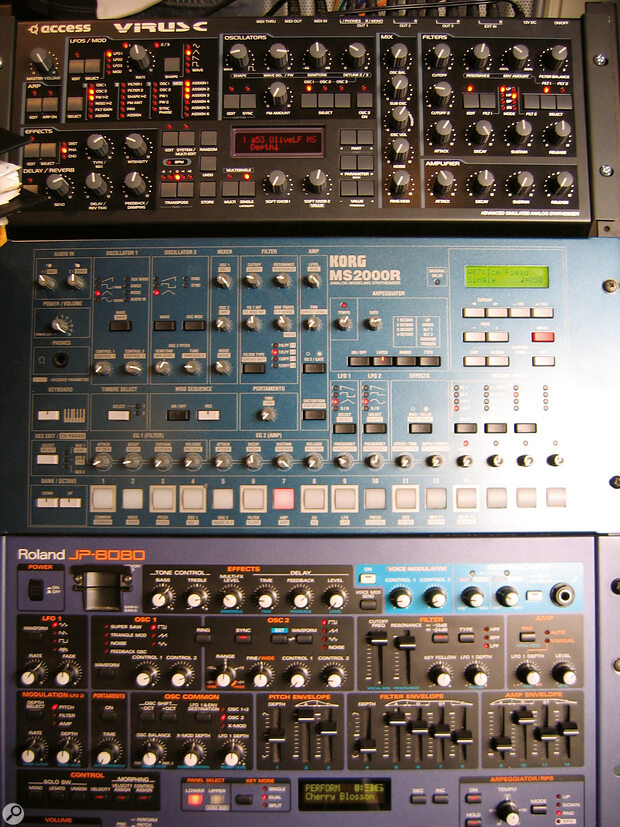 An Access Virus C, Korg MS2000R and the trusty Roland JP‑8080, the first patch of which gave ‘Sandstorm’ its name.

“There’s an arpeggio that starts in the second break of the long mix that is the Nord Rack 2,” Virtanen remembers. “The big synth strings patch comes from the Roland JP‑8080, which was crucial for the track. I had the same chords done with my Korg TR‑Rack, but they were a little wussy. All the composition was the same and the actual original lead synth, we just directly sampled it to his ASR‑10.”

Fattening up the beats, the pair replicated the ReBirth TR‑909 patterns from Virtanen’s demo using Salovaara’s hardware 909, in conjunction with the 909 patch on the JV‑1080. “We used an actual 909 kick,” says Virtanen, “and then, funnily enough, the snare drum, with the big rolls and stuff, was a 909 snare from the JV‑1080, because it was really hard to get the actual 909 snare to sound good. The JV’s 909 kit just sounded snappy and good out of the box. The open and closed hi‑hats were from the actual 909 and then the crash was also from the JV.”

Other key features on ‘Sandstorm’, drums‑wise, were the enormous, reverby bass drum and cymbal crashes punctuating certain key points in the track. The kick was a 909, boosted at 60Hz and dipped at around 240Hz, mixed with an explosive effect from a sample CD. “Then off the same sample CD there were a couple of those ‘shhhhh‑pshhhh’ sweeps,” says Virtanen. “There’s a sweep that has noise and then sort of a crash and another one that is basically a reverse 909 crash, I believe.

“One other thing that was used, if you listen to the original extended mix, is the chugging drum loop that comes in. It starts with just the kick and hi‑hat and clap and then it just filters in. That came from my original project as well, and it’s actually a crucial part of the track as well, but it’s sort of such a tiny part.”

The thumping bass on ‘Sandstorm’, meanwhile, was provided by the JV‑1080. “It’s some kind of hollow square bass,” says Virtanen. “What’s funny about that one is that I don’t think it comes out of the box in tune.”

Once the programming for the track was done, the split‑out sounds were fed through a Mackie 24/8 mixer and summed, live, to a Tascam DA‑20 DAT recorder, as Virtanen and Salovaara made manual fader moves and filter sweeps.

“Yes, it was madness,” Virtanen laughs. “We didn’t have [MIDI] CC coming in for some reason, so that’s why we needed to do it live. When we were working on the track, sometimes when we got to the build‑ups, the snare roll — ‘drrrrrrr’ — would just be doing the same thing [with no fade‑up] because we didn’t want to all the time go with the mixer or a filter.

“So, then there was a little bit of coordination, y’know, having a rack and then just like four hands on it, on five or six controls, in separate parts of the track. In a sort of a geeky way, I’m really proud of that after the fact. But it was really a pain in the ass. Especially because now, you could just draw automation.

“I don’t remember if it was the second or third take and then that was that. There was no edit whatsoever. That’s how the DAT was left for the mastering.”

I wasn’t a DJ, I was a clubber myself. I wouldn’t call myself even a producer at that point. Y’know, I was an amateur noisemaker.

As an important sign of things to come, when ‘Sandstorm’ was first played out by a DJ in Turku, the clubbers went nuts for it. “It’s still beyond me,” Virtanen enthuses. “I wasn’t a DJ, I was a clubber myself. I wouldn’t call myself even a producer at that point. Y’know, I was an amateur noisemaker. We had the track ready and burned it on a CD and we just handed it to Jaakko’s resident DJ buddy. We didn’t even have a vinyl yet.”

Virtanen clearly remembers the clubbers’ ecstatic reactions: “It was so weird. I literally thought that somebody had organised a Candid Camera moment. In a quiet breakdown it was strange cause you could hear when people started flocking to the dancefloor.” Then when the beats and hookline riff of ‘Sandstorm’ kicked back in, the place erupted. “Literally the first time it was played, Jaakko and I were looking at each other, like, ‘What the fuck is going on?’”