Within two weeks of being released on the 16 Inch label in October 1999, ‘Sandstorm’ hit the Finnish dance charts and stayed there for four months. At the same time, Virtanen uploaded the track to the still‑experimental MP3.com. “I uploaded my original demo but also the one produced with JS16,” he remembers.

Through MP3.com, ‘Sandstorm’ gained the attention of UK dance label Neo, who licensed the track for Europe and Australia. In the UK, it produced a handy news story, since ‘Sandstorm’ was touted as the first example of an independent track being picked up through a file‑sharing website.

“Neo had a really nice story about them finding it from MP3.com,” says Virtanen. “I’m not saying it’s not true, but we did send them a vinyl at some point as well. But whether they got the vinyl or not, it was a really clever advertisement, because I was interviewed by the BBC and this and that. Like, actual news.”

Shrewdly, of course, the label then asked Virtanen to remove the track from MP3.com, and sales of the single began to rocket, with ‘Sandstorm’ entering the charts at number three in the UK, thanks to the huge support of Radio 1 DJs Judge Jules and Pete Tong.

“They very much affected the outcome,” says Virtanen. “Y’know, obviously, there’s the rest of the world, but the UK charts at that time especially were a huge indicator. It wasn’t until the UK stuff went really well that things really started happening.”

From this point on, Ville Virtanen began to receive dozens of highly lucrative offers to perform DJ sets in clubs and at festivals. There was only one problem — he didn’t know how to DJ. “I was quite bummed actually,” he admits, “because I wasn’t a DJ and I’d never done DJ’ing before. I’d started getting enquiries from Gatecrasher [club promoter] and whatnot, and I had to turn them down because I didn’t want to go and make myself look like an idiot.

“JS was a very established DJ and he’d done a couple of the DMC [World DJ Championship] things in London back in the mid ’90s, and did really well too, apparently. So, he knew the Technics in and out and he tried to teach me. And while I grasped the concept of course, even beatmatching two tracks of my own was difficult for me.

“JS was like, ‘Come on, dude, let’s just spend a day. I’ll teach you. Let’s plan a set and you put the records in that order and you just do that.’ I’m like, ‘Dude, what if in the middle of a track something happens? I’m gonna make an ass of myself.’” 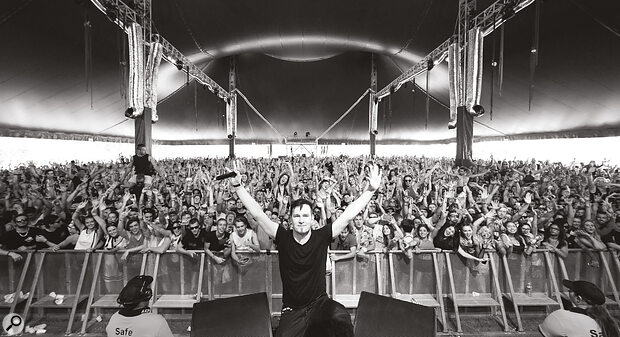 Instead of DJ sets, Virtanen started doing live shows using DAT playback and some live‑played keyboard elements. Even though this worked well, he was itching to bring even more live elements into his performances. “Then I had my own little system,” he says. “I had a Pioneer [DJM‑]600 mixer and a CMX‑5000 [twin CD deck] with front‑loading CDs. Then I had a hardware 16‑track MIDI sequencer, a Yamaha RM1x. Really crappy sounds, but I was basically using one or two sounds out of it.

“I also had an E‑mu ESI‑32 sampler. I was able to use that so that I could get sounds out of it, but I never really liked it. Then I had a Korg Karma as my master keyboard. So, I had two or three sound sources that I could use.”

In the CD‑based part of his setup, Virtanen manipulated CD‑burned elements from ‘Sandstorm’ and other tracks from his 2000 debut album, Before The Storm. “What I did was I bounced bass and beats on one stem, and then burned that on CD. And I did the same with the rest of the stuff — so vocals and synths and effects on another CD — and then I mixed them together.

“So, basically I beat matched two of my ‘half’ records and that’s what I used the DJ gear for. And then sometimes I did mix in, DJ‑like, from track to track. But often at that time I would just end a track and then start another one.

“With the hardware sequencer and the sampler and synth, I could programme in some beats. Often, I would just, with the mixer, take out the beats and the bass [on the CD], and I could throw in a manually sync’ed breakbeat or something like that. For instance, on a 16‑bar round, all the first 15 would be the normal stuff, but then I would take out the last bar and have a breakbeat fill or something like that.”

In addition, the vocal hookline from Darude’s follow‑up single ‘Feel The Beat’ was cut up into individual words and used as a sonic motif in his sets. “I would just have ‘I...can...feel...the...beat’ on separate keys and then I could do something with that.

“Electronic music done live is quite a bitch to perform,” he adds. “Convincingly, smartly. And I learned how to DJ doing that because I had to beat match my own stuff. Accidentally, I’d caused myself to learn how to DJ.”

A Life Of Its Own

Since it’s been reworked by many other producers down the years, Virtanen had to create a remix pack version of ‘Sandstorm’, after both he and Jaakko Salovaara transferred their systems to Logic in the early 2000s. Unfortunately, the switchover process saw many of the original program files of ‘Sandstorm’ becoming accidentally lost. 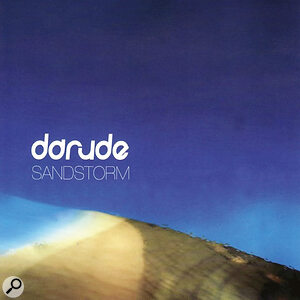 “So, my first album is nowhere,” Virtanen laments. “I have all the stuff from ‘Sandstorm’, but that’s only because it became big before he changed his system. I also had a good bit of the initial important samples.”

Virtanen found that recreating ‘Sandstorm’ in Logic wasn’t a particularly tricky task. “It was quite a simple sort of production, sound‑wise,” he says. “I have the Nord Rack here in my studio, I have the JP here, I have all the JV stuff sampled, and I have the sample CDs. So, there’s not much to it.”

Most of the other tracks on Before The Storm, however, involved sampling from piles of CDs and vinyl, which the pair never listed for future reference. “There was no marking what comes from where or how,” says Virtanen. “We didn’t do that because we didn’t realise we should, but also because we didn’t sample anything recognisable. Everything was mangled. So, we were not concerned about copyright at that point. There are very few things anybody would recognise, even if they knew what the stuff was.

“That was Jaakko’s kind of MO with a lot of stuff — just sample a snare here and a guitar riff there. But then it would be transposed eight up or seven down or filtered and this and that. So even though we were sampling, it wasn’t sampling for the idea. It was sampling for a certain bit of a sound.

“But the downside of that,” Virtanen laughs, “is that recreating those things is impossible.”

While the success of ‘Sandstorm’ has kept returning to Virtanen in wave after wave over the past 20 years, as film and sports TV directors and game designers have adopted the track, there have been downsides in terms of controlling its copyright. Not least in others doing bootleg remixes of ‘Sandstorm’ for their own promotional gain and uploading them to various platforms.

“Now obviously I still feel huge ownership and huge pride, but I’m also very protective of the track,” says Virtanen. “There’s been these huge shifts in the industry and then also in the technology and the internet. Today being an artist and trying to be protective of your track, it’s like you’re fighting windmills.

Today being an artist and trying to be protective of your track, it’s like you’re fighting windmills.

“Ten years ago, if somebody made a bootleg of ‘Sandstorm’, I could’ve gone on YouTube and filed a copyright strike. Or in the early 2000s there were a couple of bootlegs that would be actually a test pressing of vinyl or CD. Rip‑offs would be something that it would be actually worth going after. So, today it’s just a different world and I’ve slowly tried to adapt to that. And sort of embrace — and I’m not saying it’s right — the almost free‑for‑all that the internet is. But I’ve also tried to be sort of teaching a little bit of the respect that you should have.

At the same time, the lasting appeal of ‘Sandstorm’ has also been largely down to the internet. Users of video game streaming service Twitch got so used to hearing the track as the background to their playing that a joke started amongst them. Anyone requesting the name of any unknown track was delivered a swift response: “Darude – Sandstorm”. Before long this had developed into a series of memes.

Virtanen then wondered if he could develop the idea himself into an April Fool’s Day joke and considered approaching Shazam. Coincidentally, in 2015, YouTube got in touch, floating the same idea.

‘When YouTube calls, you pick up,” Virtanen laughs. “It was such a perfect thing to happen too in many ways. In 2015 we were getting ready to release my first single off my Moments album. My music video [for the single ‘Beautiful Alien’] was already being made. The idea was that we would get traffic to the new track on the same day.

“It was really funny. People were looking for, like, Metallica and then it was like, ‘Did you mean Darude Sandstorm?’ I got hate mail for that: ‘What the hell is this?’ But it was like, ‘Do you think that I could affect YouTube like that? It was YouTube.’ They felt the pulse of the meme world.

“It was such a beautiful thing. I think we had two‑and‑a‑half million views on ‘Sandstorm’ that day and then 200‑250,000 for ‘Beautiful Alien’ on redirects. When Sandstorm started, we just had a link to the new video.” After more than two decades, Ville Virtanen has never gotten tired of hearing or performing ‘Sandstorm’. “I know pretty much every millisecond of those 26 audio tracks that it has,” he points out. “I know the chords, I know the melody, the riff, the rhythms and it does please me musically. I still feel good every time I hear it.”

Of course, he still gets asked how he created the ‘Sandstorm’ lead sound. While revealing the Quadrafuzz distortion element, he’s careful not to mention which specific FastTracker sound it was that he used.

“So, figure this too,” he adds. “A lot of people confuse the main lead sound to a squelching 303. And usually the lure of a 303 sound is the filter‑tweaking that causes the resonance — sometimes screaming, sometimes just distorted muffle, whatever. But the ‘Sandstorm’ lead sound doesn’t do anything. The only thing it does is toward the build‑ups, it goes under a filter a little bit. It just does a little dip so that when the one hits, it’s full open again.”

In terms of the ever‑continuing success of ‘Sandstorm’, Ville Virtanen can only sit back and marvel at it all, without truly understanding the dance hit monster he created. “One thing I do know is the key thing is it’s so simple, so the least‑educated in dance music person will get it,” he laughs. “There are a lot of people who are pissed off about the track. But for some reason it doesn’t irritate most people and it doesn’t bore people.

“It’s so weird, sincerely. It’s the most repetitive thing, and I don’t know why, but the secret is that it doesn’t get boring.”