In this episode, Canadian Producer and Educator Mat Gendreau shares his 5 top tips for using parallel processing techniques on voice, bass and drums to help you get a professional polish and more energy in your overall mix. 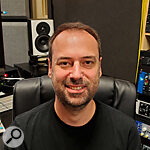 Producer Mat GendreauMat Gendreau is a Canadian-born and Philadelphia-based music producer, composer, recording artist, label owner and educator. He is the founder and program director of the Rowan University Bachelor of Science in Music Industry in Glassboro NJ, USA, and he records under the names JAXX DE LUXE, Expo 67 and Plastic Operator (with bandmate Pieter Van Dessel).

While graduating with an MA in Audio Production from University of Westminster in London, Gendreau cut his teeth as an in-house engineer at Mute Records in the early 2000s, He was also the main studio engineer for producer Arthur Baker. Over the years his music productions have been released by labels such as EMI, Mute, Virgin, Sony, Tommy Boy, Ministry Of Sound and Universal, and he’s worked with many artists including Lenny Kravitz, Goldfrapp, New Order, Arthur Baker, Tommie Sunshine, CLIENT, Erasure, King Britt and Josh Wink.

His band Plastic Operator caught the attention of BBC Radio 1 DJ Rob Da Bank with the song 'Folder' in 2005 and the single was signed to Sunday Best Recordings. In 2007, Mathieu launched his own label, Fine Day Records, and released Plastic Operator's album 'Different Places' to critical acclaim. The band performed live in many of Europe's largest clubs, events and festivals including Bestival (Isle of Wight), Razzmatazz Club (Barcelona), Petrol, Culture Club (Belgium) and Paris Fashion Week. Mathieu has produced numerous remixes, including 'Chains of Love - Plastic Operator remix' for chart-topping band Erasure (Mute/EMI). His club smash hit Booka Shade vs. Plastic Operator 'I Won’t Back Down' was released on Ministry Of Sound/Hed Kandi.

In 2018, under his house music moniker JAXX DE LUXE, Mathieu signed to legendary house music label Nervous Records with the single 'I’m Taking You High – Feat. Aphra'.  Later that year his JAXX DE LUXE remix of Lenny Kravitz's 'Low' was part of a remix package that pushed the single to Number 1 on the Billboard Dance Music Chart.

Illustrated version of the podcast