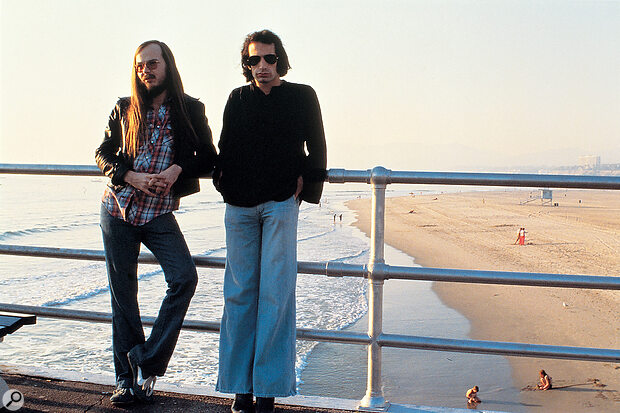 By the time Aja was released in 1977, Steely Dan consisted only of founders Walter Becker (left) and Donald Fagen.Photo: Universal Music Archive

The title track of Steely Dan's Aja is legendary for many reasons, including the spectacular work of Steve Gadd. Who, it turns out, almost didn't make the cut in the album's planned 'rotating list of drummers'...

There have surely been more words written about Steely Dan's Aja album than all of its predecessors combined. It was the band's first platinum album, received, in the main, with much critical acclaim, and on its release, the notoriously interview-shy writer/performer duo of Donald Fagen and the late Walter Becker had been instructed by their record company to 'up their profile'. Which meant that they might actually talk about their new album a little mostly in cryptic in-jokes and deflections, of course, that left music journalists to make up their own interpretations of both the work and the men behind it.

To be fair, Aja was different. Highly sophisticated and not easy to pigeonhole, the album's smooth-sounding, but sometimes artfully obscure blend of jazz and progressive pop and rock was a universe apart from the anarchic punk scene prevalent in the UK in 1977. Aja, nonetheless, soon became the 'hi-fi demo record of choice' for recorded-sound buffs on both sides of the Atlantic, holding onto that accolade until Donald Fagen's The Nightfly solo album in 1982. 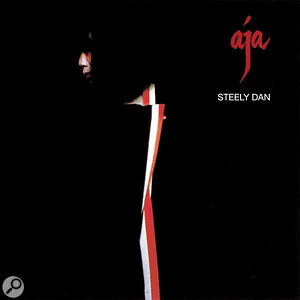 Aja was, allegedly, the name the Korean wife of Donald Fagen's friend's brother apparently Becker and Fagen "just liked the sound of it". Photographer Hideki Fujii shot this picture of model/actress Sayoko Yamaguchi, thereby giving Steely Dan their only decent cover image in nine attempts!Photo: Hideki FujiiAja reached the rare heights, for a Steely Dan album, of number three in the US charts and number five in the UK. It spawned three minor hit singles, won a Grammy award in 1978 for Best Engineered Non-Classical Recording and received nominations for both Album Of The Year and Best Pop Performance By A Duo Or Group With Vocals. It remains their best-selling studio album, amassing to date over five million copy sales.

On its release in September 1977, Aja, the album, was perhaps the purest realisation yet of writing duo Donald Fagen and Walter Becker's deconstruction and reimagining of the band that started its recording life with 1972's oddly eclectic Can't Buy A Thrill. Album by album, thereafter, through Countdown To Ecstasy, Pretzel Logic, Katy Lied and The Royal Scam, the 'band member' names all disappear, to be replaced by an ever increasing legion of the hottest session players of the day. By Aja, only original guitarist Denny Dias survives the cut, but to play on just one track, and with that as his final recorded contribution.

Stories of Becker and Fagen's 'studio excesses' abound, with albums taking months to complete as they worked their way through a host of top-flight players trying to find just the right solo, spent hours punching in individual syllables of vocals, swapped out whole studio band line-ups to get different versions of the same song, and fastidiously micro-managed even experienced, stellar session players on overdubs until they either got exactly what they wanted, or moved on to someone else. For Aja, however, their tracking sessions were rather more tightly organised. Using line-ups entirely made up of session players meant working to 'union hours' of three-hour sessions with an hour break in between, even if the players did sometimes agree to ditch the break and work on through. Aja tracking sessions generally started at 2pm each day and never went late into the night. 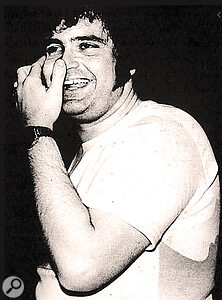 Bill Schnee, around the time of his work on Aja.Many sources state that Aja was recorded at Village Recorders, Los Angeles, but almost all the original tracking sessions actually took place between January and July at a small studio on Hollywood Boulevard called, at the time, Producers' Workshop. Subsequent overdubs were indeed done at 'the Village' with long-time Steely Dan associate Roger Nichols at the helm, but the hands on the controls at all but one of the tracking sessions belonged to renowned LA engineer Bill Schnee: "Steely Dan's producer Gary Katz called me and asked if I would record their next album. Being a big fan of theirs, I jumped at it."

If Bill was going to track Steely Dan, he knew exactly where he wanted to do it. "I told Gary 'I have a studio I really like using — it's a little bit on the funky side, but it sounds incredible.' That was good enough for him. He just said, 'If that's where you are comfortable, we'll do it there,' and as far as I know, no-one even previewed it. They just showed up on the first day! Gary told me that it was going to be a 'drug-free zone', and that the plan was to have 'a rotating list of drummers'."

On that 'rotating list' was Steve Gadd, flown in from New York for a two-day session. "Of course, I was very familiar with him from Paul Simon's 'Fifty Ways To Leave Your Lover'," says Bill. "He may not have been the first person to play a 'drag snare', but he did such a great job with it on that song. So, in came Steve, and I set him up and got a drum sound on him, and on that first day we recorded two songs: boom, and boom. Just like that. I was blown away with him."

Not everyone was quite so impressed, however. As the musicians were leaving at the end of the day, Bill was passing Donald and Walter in the corridor and heard: "No, I didn't care for him either."

"'Well, no, he played just fine,' came the reply, 'but I prefer more of a backbeat like Jeff [Porcaro] or Jim [Keltner]. Kinda laid-back, you know. His [Gadd's] snare is right on top.'

"Well, I just said to them 'Man, I'm the same, but did you listen to what he played? He was just great!'"

Bill Schnee: "In came Steve, and I set him up and got a drum sound on him, and on that first day we recorded two songs: boom, and boom. Just like that. I was blown away with him."

Of the four Steely Dan songs done over the two days with Steve Gadd in the drum chair, only the title track 'Aja' was to actually make it onto the album. There is some doubt about which tracks were recorded in each of the days: the track sheets and tape box labelling would normally be able to confirm this, but some of the two-inch, 24-track multitrack tapes from the Aja sessions are now missing and possibly lost. The one certainty, however, is that 'Aja' was recorded as the first track to be done on the second day.

It probably helped that Steve Gadd was well and truly 'warmed up', having already recorded two hit songs for someone else that morning (see 'Steve Gadd's Morning Off' box), but given the length and complexity of the task ahead, there was a general expectation that the track would be a hard one to get right and that they might well have to spend the whole day just rehearsing it. 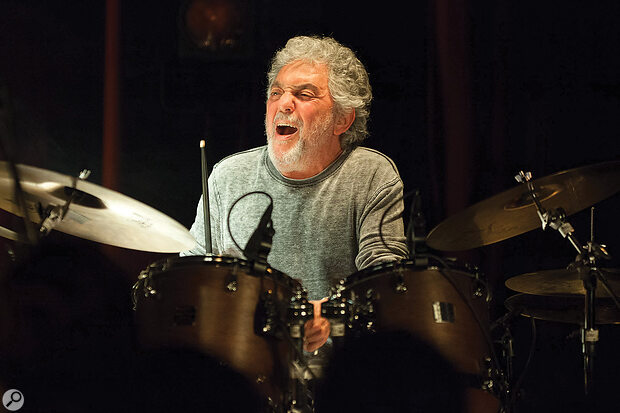 Steve Gadd has remained one of the world's leading drummers since arriving on the scene in the '70s. His improvisation on 'Aja' still ranks as one of the finest studio drum performances on record.

"This thing was at least two music stands of charts from Larry Carlton. It was multiple pages long and really in-depth and challenging even for some of the greatest studio players of all time," Bill recalls. Star session guitarist Larry Carlton had been preparing charts for Becker and Fagen from their Katy Lied album, through The Royal Scam and now Aja. Becker and Fagen recorded 'writing demos', with piano and bass parts and occasionally a vocal, too. Carlton would transcribe and, effectively, orchestrate these into hand-written parts for the studio band line-up. Whilst the acoustic and electric piano parts would generally be fairly tightly scripted, bass player Chuck Rainey would be given free rein, with just a chord chart. Basic rhythms for each section would be written for the drums, whilst Carlton himself alternated between written parts derived from the piano sketch and his trademark tasteful lines and partial chords built around the overall harmonic structure of the tune. The latter is never more evident than on the complex chording of 'Aja', which guitarist Denny Dias once described as "a rock & roll record that absolutely cannot be played on a guitar".

Steely Dan were renowned for tracking songs repeatedly to refine them in the studio, but on the Aja sessions, Bill Schnee says things were done more efficiently, working on sections. "They'd listen to the demo to get the form of it, then they'd play it down the first time, and it might not be very good straight away — although some of them could be great — and then Walter would say 'Do you think that section was good?' And Donald would ask, 'Guys, play that again going into the chorus. That doesn't feel right somehow.' They'd work on bits and pieces, as necessary, and they'd make structural changes if something wasn't working, but not too often. These sessions were really nothing like what I'd heard about them. This was more like a band: more like the earlier albums when they were a band. On Aja, it was all about feel, and in general, we moved along really briskly."

Bill Schnee: "This was more like a band: more like the earlier albums when they were a band... it was all about feel"

Other than the ever-changing drummer seat, the studio band for the Aja backing track sessions was uncharacteristically consistent, although no one person managed to be ever-present! The line-up for the sessions using Steve Gadd on drums was Chuck Rainey on bass, Larry Carlton on guitar, Michael Omartian on acoustic piano and Joe Sample on electric piano. Percussionist, vibes and piano player Victor Feldman and sax player Wayne Shorter are credited for overdubbed parts, as are Becker and Fagen themselves, along with Tim Schmit for backing vocals and Denny Dias on guitar. It was quite common by now for neither Becker nor Fagen to play anything at all at the tracking stage of their albums. "For songs that already had a lyric, we might sometimes have a guide vocal," says Bill. "Donald would go in the iso booth and do a rough vocal for the band to follow. The first time he came in to hear a playback he said 'Turn my voice down — I hate my voice'. But there certainly wasn't a guide vocal on all of them. Sometimes, if no lyrics had been written yet, there might even be some 'la la' stuff as a guide to where the vocal would eventually go."