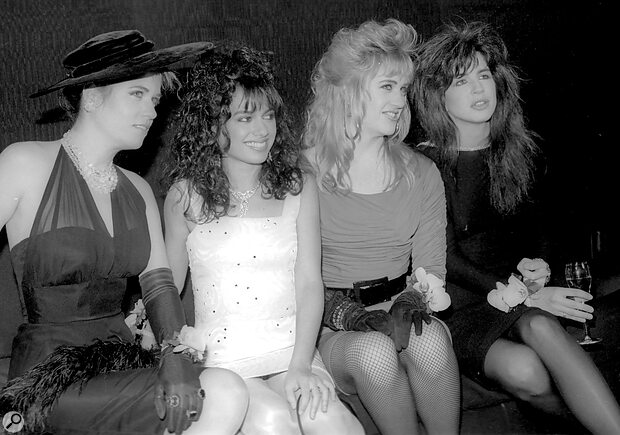 ‘Walk Like An Egyptian’ was a huge hit for the Bangles, but it all started with a demo mix‑up and some very unusual percussion.

One of the biggest hits of the ’80s (and a staple of rock radio ever since), the Bangles’ ‘Walk Like An Egyptian’ was instantly everywhere upon its initial release in 1986, topping the US singles charts and reaching number three in the UK. But behind its driving beat, quirky hooks and sunshiny indie pop vibe lay the difficult and fractious story of its creation. At the time, it may have been the commercial high watermark for the Bangles — Susanna Hoffs (vocals/rhythm guitar), Vicki Peterson (vocals/lead guitar), Debbi Peterson (drums/vocals) and Michael Steele (bass/vocals) — but in truth some members of the band hated the track.

Ahead of the making of the Bangles’ second album, Different Light, Prince had already offered up a song he’d written, ‘Manic Monday’, for the band to record. ‘Walk Like An Egyptian’ had similarly been written by an outsider, Liam Sternberg of Akron, Ohio band Jane Aire & The Belvederes, who’d branched out as a songwriter for other artists. By the time it was brought to the Bangles, the song had already been rejected by two one‑off novelty hit singers, Tony ‘Mickey’ Basil and Lene ‘Lucky Number’ Lovich.

Vicki Peterson later remembered, “David Kahne, our producer at the time, showed up at rehearsal with a tape of a demo of the song, sung with a droll charm by [US singer] Marti Jones. I realised that we were never gonna write a song like that and there was nothing remotely like it on our album so far and I agreed to try it in the studio. We had a sing‑off for the verses, with Kahne as head judge. Don’t know that I’d ever do it that way again.”

“There was always some tension,” David Kahne says today. “But that’s not uncommon when producing a band. There’s usually tension between the band members and there was in the Bangles.”

To complicate matters, as well as being the band’s producer, Kahne was also their A&R man at Columbia Records. “I was critical,” he admits. “So, if somebody is doing something that I don’t think works, I wait until I can say, ‘Why don’t you try this?’ Y’know, any time you’re criticising somebody, you have to be careful. I always wondered if I hadn’t been at the label if they would’ve decided to get rid of me.”

David Kahne had followed a twisty path to this point in 1986 where he was both a record producer and A&R man. Originally a high school English teacher, who played in bands in the evenings and at weekends, he’d started writing and demo’ing songs with one of his students and then landed a deal with Capitol Records.

Together, the pair made two albums in the mid‑’70s under the name of Voudouris & Kahne. “Two albums that are a little embarrassing at times,” he confesses. “When I heard Aja by Steely Dan, I realised, ‘Oh, that’s what I was going for.’ But if you heard the music that we did, you would say, ‘Yeah, you didn’t get there.’ But I didn’t think the producers were good and I couldn’t figure out why.

“So, I heard myself on the radio one day — the one DJ that played the one song the one time — and I thought, ‘I’m not good enough.’ And I stopped and I got a job at a studio in San Francisco, answering phones, to learn how to run the gear. Cause I thought, ‘Well, I wanna be a producer. I’m as good as those guys.’”

Using all the studio downtime that he could get, Kahne began to gain valuable recording experience. First of all, employed at Wally Heider Studios in San Francisco, and later moving to punk/new wave label 415 Records’ studio The Automatt, he started recording various Californian bands such as Rank & File and Pearl Harbor & The Explosions. “A couple of them took off,” he remembers, “and that’s how I got my job at Columbia.”

Before that, Kahne had already met the Bangles in 1982 when the LA‑based band travelled up to San Francisco to promote their self‑titled debut EP. He and the group ended up recording a song together, which was heard by Columbia A&R man Peter Jay Philbin. “I went to Columbia right as he was signing them,” Kahne recalls, “and he signed them partly with the idea that I would produce...