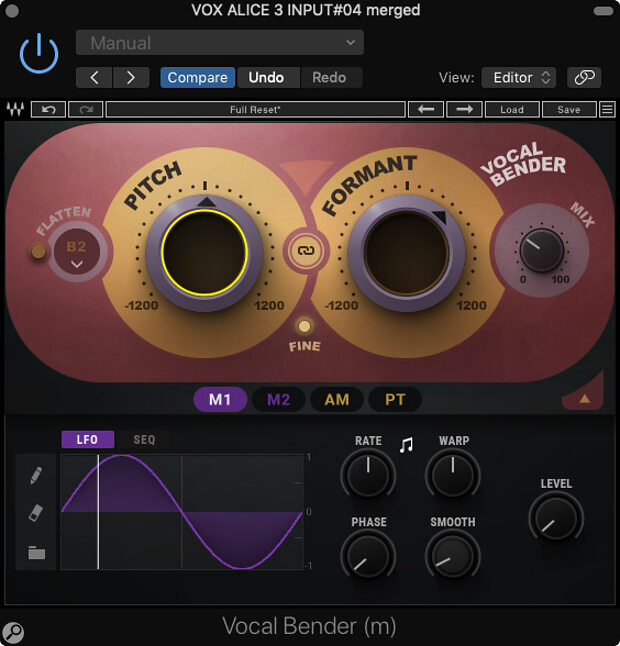 Could this plug‑in be both the quickest and the best way to achieve a range of familiar vocal effects?

Whereas Waves’ OVox (http://sosm.ag/waves-ovox-0520), which is also a dedicated vocal effects plug‑in, has a synth‑meets‑vocoder character, their new Vocal Bender is dedicated to pitch and formant manipulation. It allows the user to create familiar vocal effects quickly, using relatively few controls, and the treatments cover a lot of stylistic ground, from hip hop, pop and R&B to EDM and electronica. Vocal Bender is designed to add zero latency, to make it suitable for live use, and all the common Mac and Windows plug‑in formats are supported.

The GUI sports large Pitch and Formant controls, each with a ±1 octave range, plus a separate Flatten button for creating a hard‑tuned, robotic vocal effect, locked to a user‑specified musical note. A wet/dry Mix control can be automated to bring the effect in and out and a small Link knob can force the Pitch and Formant knobs to move together. Both Pitch and Formant allow adjustment in semitone increments unless the Fine mode is turned on, in which case they’re continuously variable.

Changing the formant of a voice can change its owner’s apparent age and/or gender. The effect can still stray into ‘cartoon’ territory at the extremes, but more restrained settings sound impressive here, and can be used to add softened parallel harmonies, introduce vibrato or produce the effect of vocal doubling, with the second voice having a different character from the original. The effect is noticeably smoother than I’ve heard from previous formant shifters — as long as you feed it a clean monophonic source, ideally before adding other effects such as reverb or delay.

The controls for four modulation options are, by default, hidden from the user — clicking the Open icon (bottom right of the GUI) reveals them — and these are the key to some of the more unusual treatments. The four modulator types, denoted by the four buttons at the bottom, can be dragged and dropped onto any plug‑in parameter to establish routing. This can include targeting controls in the other modulation sections, other than Smooth and Offset (the latter is found in the Pitch tracking section). Hold/dragging on the newly added modulation icon adjusts the degree of modulation, with the range indicated by a section of circle inside the target control.

M1 and M2 each offer a choice of LFO or step‑sequence (up to 16 steps) modulation sources, with control knobs for Rate, Warp, Phase and Smooth as well as Level. Warp bends the shape of the modulation waveform in a way reminiscent of phase distortion. There’s a choice of preset LFO waveforms or a pencil tool to draw your own and there are various tempo‑sync options. The AM option uses an envelope follower, while PT tracks the incoming pitch and turns it into a modulation source. Using the AM mode, effects such as vibrato, formant shift or pitch detuning can be made to vary depending on the loudness of the signal, depending on how you route the modulators. If the Pitch Tracker is used to control formant, the formant shift changes with incoming pitch; used sparingly this can create a convincing vocal double effect, which can be made to sound even more realistic by adding a small amount of pitch detune.

The effect is noticeably smoother than I’ve heard from previous formant shifters.

From vocal doubles of the type employed by the likes of Billie Eilish or manifested as high‑pitched EDM vocal topline drops, the effects can range from the subtle to well over‑the‑top. But then who said creativity had to be about restraint? Some may think these types of vocal effects are overused but they show no sign of going away and having tried various pitch and formant vocal processors over the years, I have to say that none comes close to sounding as smooth as Vocal Bender. In the context of a mix, the sound quality is impressive and everything works smoothly when modulation is added. The key to great results is automating the controls and also making sensible use of the modulators, but there are plenty of presets to get you started. It’s also fair to say that this is the fastest and simplest way I know to achieve such effects — I have a feeling that Vocal Bender is going to do very well!

Quick and easy to use, this is a good‑sounding pitch and formant‑shifting/modulation plug‑in that should prove popular.