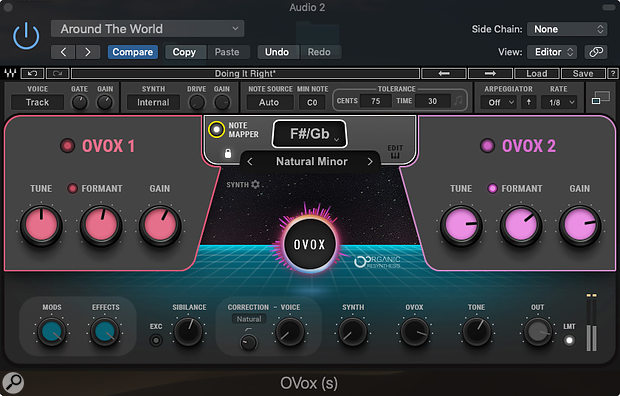 Waves' new plug–in is more than just a vocoder...

Is it a synth, is it a vocoder, is it a special effect, or is it a voice processor? Actually, with an internal, pitch-tracking, eight-voice synth on-board, Waves' OVox can lay claim to being all of the above and more. It has plenty of hidden depths, as I'll explain shortly, but note that you can easily get going by simply dropping it on a track and checking out the very large and varied range of presets. As with other Waves plug-ins, all the common plug-in formats are supported on Mac and Windows operating systems, and it can run as a stand-alone application, which opens up possibilities for live performance.

The vocoding process at the heart of OVox requires two sound sources — typically a synth to provide the pitched sound, which we call the 'carrier', and a voice input as the 'modulator', whose spectrum and level are applied dynamically to those of the carrier. At its simplest, OVox tracks the pitch of the incoming audio, then uses that to control the oscillators of its internal synth. To use it as a MIDI-controlled instrument, OVox should be opened in your DAW as an Instrument with its Note Source set to MIDI. Its external audio side-chain input is then used to receive the desired voice track. But OVox can also be used as a MIDI-controlled audio plug-in, and in Logic Pro (the host I used for my tests) it showed up with all three options: Effect, Instrument and MIDI-controlled audio plug-in.

While the presets use the internal synth, there's the option of using an external carrier signal instead, in which case you use OVox not as an instrument plug-in but an insert effect. This mode is akin to a traditional vocoder, with inputs for both the synth sound and, typically, a vocal, though of course you can experiment with any type of input signal — you don't have to stick to voice. To use OVox this way, instantiate it as you would any other insert effect in your DAW, set OVox's Synth Source to Sidechain, then route the external synth track to the plug-in's side-chain (different DAWs approach side-chain routing differently so if in doubt check the manual). To work effectively the synth input should be something harmonically rich and fairly consistent in level, but other than that pretty much anything goes.

I found the built-in synth easy to use, and in most cases more than adequately flexible — it is, after all, designed specifically to work well as a Vocoder carrier input (it is harmonically rich, it offers a choice of waveforms and it has a flexible filter section). There's also an Arpeggiator, with tempo-sync option, a Note Generator, and a Note Mapper, which can be used only with the internal synth.

Not only does the Note Mapper enable you to map any incoming performance note to one or more different synth notes, but it can also make certain notes trigger specific chords.

OVox's GUI defaults to a Main view (there's an expanded view too, of which more below), in which you'll find the essential controls and two OVox processing sections, each with its own oscillator, noise generator, formant filter, gain adjustment and dynamic controls. Between these is the Note Mapper, with windows that allow you to select the key and scale, and a padlock button to lock the key/scale setting while you change presets. Gain and Drive controls allow you to treat the carrier input, but only when Synth is set to Track or Sidechain. Drive adds distortion to create additional harmonics, which may be useful if the synth sound you're using is too clean.

At the top of the screen, settings relate to the input source, the note detector and the arpeggiator. When you select Voice as the input source, a pitch detector analyses the pitch of the voice and sends corresponding notes to the synth. Auto mode uses both MIDI and Voice note sources for control, and MIDI notes take priority over voice when both are present. The low note range of the voice signal can be limited to anywhere from C0 to C2, and a tolerance control sets how far the sung note will be allowed to deviate from pitch before a new synth note is generated.

Not only does the Note Mapper enable you to map any incoming performance note to one or more different synth notes, but it can also make certain notes trigger chords. You can assign a different chord to every input note, and I can see dance-music fans getting a lot of mileage out of this. The mapping is carried out on a keyboard display, which means it's very intuitive, but there are also plenty of Note Mapper presets to show what's possible.

At the bottom, a sibilance control allows unpitched sounds such as sibilance to be passed unprocessed, to improve intelligibility, and an Exclusive switch mutes the OVox signal when unpitched sounds are detected — this is useful, since these can otherwise cause a distracting 'buzz'. Here, you can also access two speeds of pitch correction (which affect the dry component of the vocal sound), and output controls that allow the various inputs to be mixed with the processed sound.

In the Expanded view, the two OVox panels expand to give more detailed control. This includes an Oscillator Shape 'vector' panel — the vertical axis shifts from square to triangle wave and rolls off the generated harmonics, while the horizontal axis controls the pulse width of the wave and adds even harmonics. The Oscillator Character menu offers a choice of IR filters, for yet more variation.

Classic mode will get OVox behaving like a traditional vocoder, but other options shift the filter frequencies to change the character of the vocoded sound. A Focus Frequency parameter (500Hz to 5000kHz, with variable Q) allows the analyser to be tuned to the pitch range that contains the most detail (in the case of vocals, the mid-range is usually the most important). 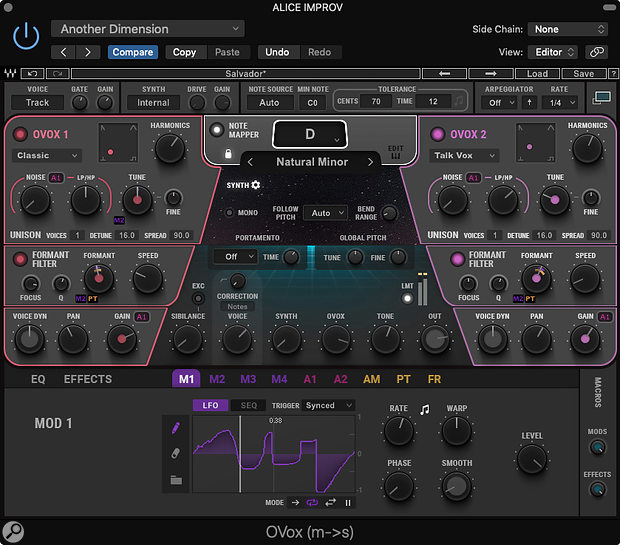 If you want depth, try diving into the drop-down Modulators panel (at the bottom of this screen).

Expanded view also reveals controls for EQ, Effects and Modulators, with the option to draw your own modulation wave shapes or to select from a panel of preset shapes, set up your own sequencer patterns, and sync the modulation to the host DAW's tempo. The effects on offer comprise Chorus, Compressor, Delay, Distortion, Reverb, Auto-pan and Limiter, and up to five effects may be used simultaneously. There are up to nine modulation sources, selectable via tabs, and these comprise four LFO/Sequencers, two ADSRs and what Waves call OSR, which are input-derived modulations based on amplitude, pitch and formant.

Assigning modulators to parameters is achieved via a drag-and-drop routine, and even the main four-band output EQ can be modulated. Modulation via MIDI CC data is also supported, and includes Velocity, Pitch Wheel, Mod Wheel, AfterTouch and Poly AfterTouch.

As I mentioned earlier, the voice is replaced in traditional vocoding by oscillators, which are filtered according to the frequency spectrum of the voice. This is achieved using a multiband filter which behaves rather like an automated graphic equaliser that follows both the EQ spectrum and level of the incoming voice. This is used to filter a harmonically rich synth sound to create the well-known 'singing synth' effect. Consequently, when the voice input stops there's no output, but digital technology allows the design of a far more sophisticated process, which is why single notes can be turned into chords, and so on.

OVox absolutely nails that old-school talking-synth sound if you want it to, but time spent studying the presets is time well spent, as it reveals just how far beyond a traditional vocoder OVox can take you. The ability to force the oscillator to pitches other than the original means octave-dropped bass sounds can be created, while the sequencers and filters are also able to turn a vocal input into a useful rhythmic pattern. 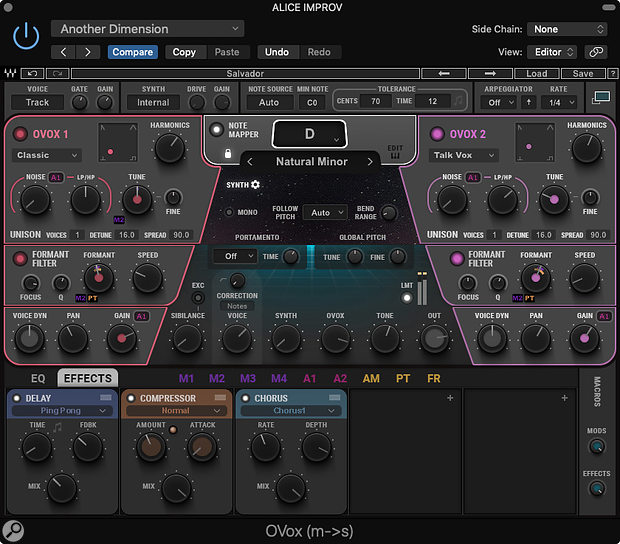 Various effects can be applied, again via an extended view.

Having so many modulation and processing options available here provides a lot of scope for designing sounds that evolve over time too, and though most of the results do have a recognisably vocoder character, I was surprised by just how organic-sounding some results were, especially when mixing in some of the pitch-corrected vocal input or a hint of the synth sound. There's also plenty of inspiration to be gained by the way some of the presets manage to pick out a melody you never realised was there!

Best of all is that despite the sophistication, there's no shortage of instant gratification — thanks to all those presets, you don't have to know this plug-in in depth before you start to use it. I've not really been a huge user of vocoders when making my own music in the past — but I can definitely see myself putting OVox to good use on future projects.

Some of the effects are possible using other Waves plug-ins, not least Morphoder, but OVox goes much further. For other vocal-effects options, check out the offerings from Antares and iZotope.