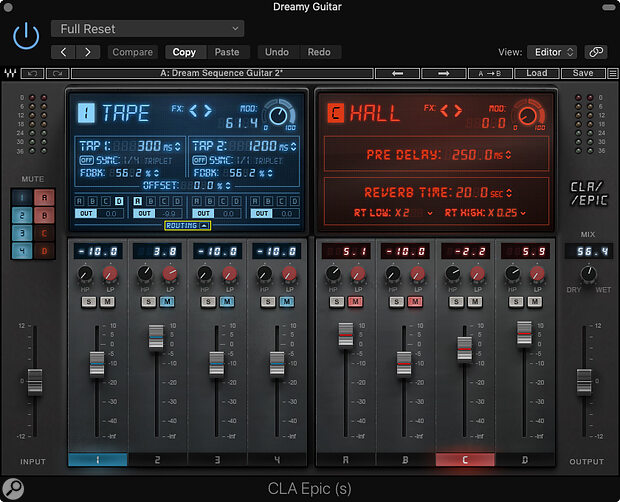 Waves have a long‑standing relationship with celebrated rock music mixer Chris Lord‑Alge, and CLA Epic, part of the Waves Signature series, offers the user some of Chris’s favourite delay and reverb treatments plus useful routing and modulation options for processing individual tracks, buses or even full mixes.

With a GUI that looks more like a mixer than an effect plug‑in, the signal flows from the delays on the left to the reverbs on the right. There are four different delay types that may be routed independently to any or all of the four reverbs, or directly to the main output, using the A, B, C, D and Out buttons at the bottom of the reverb’s LCD‑styled window. Each delay and each reverb has a fader to control its level, Mute and Solo buttons, and variable high‑ and low‑pass filters. When the A, B, C or D buttons are used, the delay is routed to one or more reverbs so we have a series connection. When only Out is selected, the delay and reverb are arranged in parallel. If signal is routed to a reverb and to Output, then the reverb connection is still serial but also with a direct‑to‑output parallel path for the delay. However, reverbs are routed directly to the mixer, so cannot be fed back into the delays.

The plug‑in comes in stereo and mono‑to‑stereo formats, with five control sections dedicated to input, output, delay processors, reverb processors and routing. In addition to input level control and metering, the input section also hosts eight mute buttons relating to the four delays and four reverbs. Clicking on a fader selects that reverb or delay type for editing in the panel above. The adjustments tend to be fairly basic and include host sync and modulation where applicable.

The four delay types are named Tape, Throw, Slap and Crowd — Tape and Slap will be familiar to us all but Throw and Crowd merit a brief explanation. Throw is similar to Tape delay but its delay tap inputs can be triggered manually or using automation, for applying delay only to a specific note or word. Crowd sounds to my ears like a multi‑tap thickener and is controlled by a single fader for setting the effect from Tight to Wide. The manual tells us this effect is created by generating a series of increasingly long delays that get quieter over time. In the reverb section we find Plate, Room, Hall and Space types. Space Reverb includes a Decay control for trimming the reverb tail to be shorter than its set length.

In isolation, the reverbs might not sound special but that’s because they’re voiced to work with the delays, to help create a big, produced sound.

When a delay is sent to one or more reverbs and also to the plug‑in’s output simultaneously, the delay fader works as a wet/dry control, while the small Value box to the right of the Out button is used to adjust the level of the signal being sent directly to the plug‑in’s output section. Clicking on the Routing arrow at the bottom of the LCD window opens a Delay Sends panel revealing four short faders with circular fader caps so that you can adjust the send level for each assignment. In the output section is a master level fader, a master wet/dry control and metering.

Operationally, you can have all four delays and all four reverbs running at the same time, but usually you’ll get the desired results using only some of each. I’m a big fan of combining delays with reverb and there’s a lot to like here, as the huge range of presets from Lord‑Alge himself and from other guests ably demonstrates. Auditioned in isolation, the reverbs might not sound special — but that’s because they’re voiced to work with the delays, to help create a big, produced sound without adding too much mud or clutter. This plug‑in can create anything from a gentle thickening to Edge‑stye guitar rhythms, vocal treatments, guitar enhancers and epic washes of sound. Best of all is that it is very easy to use, whether you’re creating patches from scratch or editing one of the many presets.