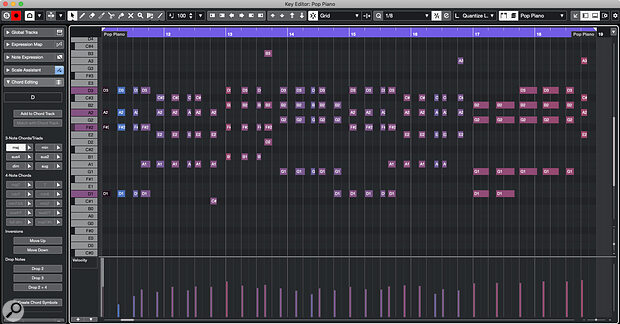 Having used Chord Pads to create an initial chord sequence, the Chord Editing panel allows you to easily add further interest via the Inversions and Drop Notes options without changing the actual chords.

In the Pro, Artist and Elements versions of Cubase 11, the already impressive suite of compositional aids was joined by the new Scale Assistant. This is potentially very useful as a corrective tool — if the piano keyboard isn’t your primary instrument, for example, or your music theory is a bit rusty — but it can also be great when you need a little melodic inspiration.

For our example this month, I’ll construct the bare chordal and melodic bones of an eight‑bar musical ‘chunk’, highlighting some easy ways to play with repetition and variation, and then use Cubase’s Scale Assistant to lend a creative hand when developing a melody to sit within this chunk.

We’ll start with two instances of HALion Sonic SE, one with a simple electric piano (for the chord sequence) and the other a synth lead patch (for the melody). You can also add a basic drumbeat or loop to provide a rhythmic bed if you find that helps.

I generally like to start songwriting with a chord sequence and, as my own piano skills tend towards the ‘one hand, three fingers’ level, I’m a big fan of using Cubase’s Chord Pad and Chord Editing features to experiment. I discussed the Chord Pads back in SOS May 2015 and for this example I followed the same basic methodology, populating the pads with some basic chords in D major (D, G, A and Bmin), with two different voicings of each chord. Experimenting with different chord sequences, including the ability to add both rhythm and dynamics, then becomes easy, single‑finger work. I opted for a classic (indeed, cliché!) four‑bar sequence that repeats twice but with slightly different rhythm/dynamics in the final two bars the second time around.

While the Chord Pad system lets you add chord voicing variations on the fly, I’ll often use the Key Editor’s Chord Editing panel for this stage and the most useful options here are provided by the Inversions and Drop Notes sections. These allow you to select any chord(s) in your MIDI clip and adjust the voicing — so you get to keep the chord sequence while still developing a sense of musical movement in the performance. As shown in the screenshot, I’ve used these options to change the voicing of the last chord hit of each bar and then, in the final two bars to add a sense of upwards motion to the chords.

The Scale Assistant works within the Key Editor so, for our melody, the first step is to create an empty eight‑bar MIDI clip on our ‘melody’ track. With this clip open in the Key Editor, you can expand the Scale Assistant pane in the Inspector. Choosing ‘Use Editor Scale’ then lets us use the drop‑down options to select the key of D and the major scale to match our chord sequence. As we’re going to use the note‑drawing tools to create some melody ideas, Snap Pitch Editing is probably the most important of the other tickboxes. With this engaged, if we add or edit notes within the clip, they’ll automatically snap to notes within the scale.

If you wish, you can change the note lane display in the Key Editor. I prefer the Key Editor’s Pitch Visibility ‘Show Pitches from Scale Editor’ option over the Scale Assistant’s ‘Show Scale Note Guides’ option. The former simply removes note lanes for all out‑of‑scale notes from the display, whereas the latter changes the pattern of light‑grey/dark‑grey shading of the note lanes. I tend to find the latter confusing, given how ingrained it is to think of this shading as reflecting the pattern of white/black piano keys.

Finally, before we start to create melody ideas, engage Snap (to Grid) and select a suitable quantise resolution. The latter will define the initial spacing of any notes in our melody. I stuck with 1/8th notes throughout the worked example, but you can experiment with shorter/longer notes or different note lengths in different sections (sets of bars) of your melody.

My initial melody created using the Line tool but with Scale Assistant ensuring every note created is in the required key/scale.

Now for the fun part: ‘drawing’ our initial melody idea. We could just start adding individual notes with the Pencil tool, but there’s more fun to be had with the Line tool. The straight‑line option is the best; if you draw a straight line in the note area, this line is transformed into a sequence of notes that follow the slope of the line. But thanks to the Scale Assistant these notes are also snapped to the nearest note in the scale.

Simply by drawing a sequence of short (for example, one bar long) straight lines, each with a different direction/steepness of slope, you can create an initial ‘flow’ for your melody idea, with rises and falls in pitch — and all devoid of any out‑of‑key notes! The screenshot shows my worked example and I’ve annotated it to give an idea of the different line segments I drew across the eight bars to create this initial pattern of notes.

Of course, this initial idea is unlikely to be the finished deal, so some editing will almost certainly now be required. After making a copy of the MIDI clip (in case you want to return to the original when it all goes horribly wrong), this editing can be done in three stages, although you can move back and forth between these stages as the melodic ideas take shape.

First, as you cycle playback of the chord/melody parts, use the mute tool to swap notes in/out of the melody. This stage might thin out the number of notes and, as a result, help define a rhythmic pattern for the melody. Second, feel free to move a note or two up/down if this makes the melody more interesting. Third, you don’t have to use every bar of the original melody created by the drawing process; as you refine things, look for single‑bar phrases that you like. Once you have two or three of these, discard the rest, and assemble these very best bits across the eight bars to create the required sense of melodic repetition.

The next screenshot shows what I ended up with after this editing process. Aside from there being fewer notes and some velocity variation added, the key thing to note is the result of the third editing stage discussed above. Having done stages one and two, I identified a few of my original bars (1, 4 and 7+8) and reconstructed my eight‑bar sequence based around only those.

After a few minutes editing work, the final eight‑bar melody tries to find the ideal balance between repetition and variation.

Within the screenshot, I’ve highlighted this in the Marker track at the top of the Key Editor display. The phrase from the first bar has actually been repeated five times; in bars 1, 2, 3, 5 and 6. However, in bars 2 and 6 it has been shifted down by two notes in the scale (it starts on B2 rather than D2). These alternative bars have the same rhythmic and melodic pattern (so there’s a sense of repetition), but the different starting pitch adds a sense of variety; it’s different but not ‘too different’.

Pitch‑shifting these notes is easy with Snap Pitch Editing engaged; you can simply select the required notes and drag them up/down; Scale Assistant makes sure everything stays in key (this makes it a great tool for creating harmony parts, but that’s a topic for another day!). Finally, Phrase 2 (in bar 4) adds a twist, in rhythm and pitch, so things don’t become too repetitive, while bars 7+8 add further variety and bring the overall eight‑bar sequence to a conclusion.

Well, no. But our song is now started — and that’s often the hardest step. Hopefully, you can see the principles at play here and how the Scale Assistant makes this sort of melodic experimentation very easy, regardless of your piano playing or music theory skills. Of course, the same process can then be repeated to create the other song sections. You then add a little work on the overall song structure (more careful use of repetition will be required here) before finally flexing your production skills to transform your bare‑bones song idea into a fully fledged, ear‑candy‑laden, international hit. Just don’t forget a songwriting credit for Cubase!