Exporting Logic Projects To Other DAWs 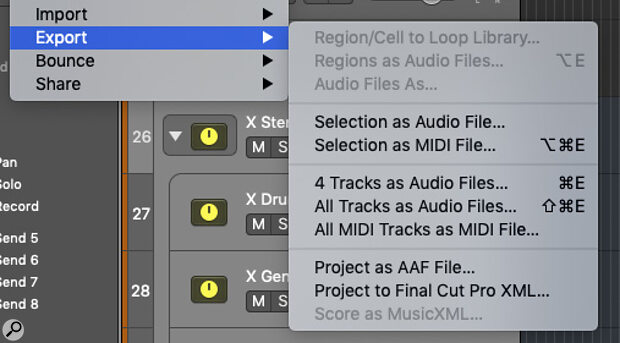 How do you export your projects for use in other DAWs? Read on to find out...

It may come as something of a shock, but not every musician and engineer uses Logic Pro X. Music and audio production is usually a collaborative endeavour and, at some point, you are going to want to work with such colleagues — even those who use something called ‘Pro Tools’. Logic Pro X offers many solutions to enable collaborative work; which you use will depend on who you are working with and what software they are using. Whilst we have reached a certain amount of standardisation with audio file formats, what you’ll need to send to your collaborators can vary depending on the project in hand, and so different methodologies are required to extract the correct material.

The simplest way to make sure that tracks from your project can be easily loaded into another DAW is to export them all as individual files. Most of Logic Pro X’s export functions are in the main window’s File / Export menu (shown above).

Before I export anything, I often want to do some tidying up — which might mean changing things that might cock up my carefully prepared mixes. So I usually create a new Project Alternative from the File menu and call it ‘Export’. It’s also sensible to make sure the track names correctly reflect their contents, as no one wants to receive 50 files named ‘Audio...’.

The Export window is where you decide what to export, and what to name the exported files.

There are several options you’ll want to address here before you go about exporting anything. Firstly, turn off Overload Protection. If your files are overloading you really need to address this in the Logic Pro X Project itself! The three Range options allow you to either export a selection (as defined by the Cycle settings); to export everything up to the end of the Project (which will create a file longer than your song if that position isn’t the same as the last Region); or to Trim Silence at File End. This last option creates audio files just as long as the last Region on a track, and this is the option you’ll usually want to select.

Generally, you’ll want to export AIFFs for those using Apple Macs and WAVs for those using other computers. Although most DAWs can read both formats, I’ve had issues with colleagues not being able to play AIFFs using some software on Windows or Linux systems, so it makes sense to be cautious and test the waters before spending time exporting. CAF is an Apple‑developed format that contains metadata and is used for Apple loops and surround‑sound lossless files, so is only really required if this is what you’re working on. The 24‑bit depth is the most common format when you want to make sure your collaborators can read the files while also maintaining dynamic range.

If you’re using multi‑output Instruments, such as drums, you can decide to export each part as a separate audio file. Clicking on the Options button in the Export window allows you to have some control over how your tracks are named. You can drag Elements to the Pattern box and the Custom Pattern is defined in the Custom text‑entry box. To export all tracks, simply choose All Tracks as Audio Files from the File / Export menu.

If you’re sending files to someone else to mix, you may want to turn off your plug‑ins and automation. But if the tracks are going to be played back via a multi‑speaker system, such as in an art installation, you’ll probably want to keep these checked. If you want to export any send/return effects, say a reverb, you’ll need to create a track in the Arrange page for the aux track on which the effect is loaded. To do this, choose Create Tracks for Selected Channel Strips from the Mixer’s Options menu. When you then export all tracks, a file will be created with the aux’s name. Your effects return export may be useful to remixers, for example, but bear in mind that they’re likely to be at quite a low level in your mix, so you may want to give them a bit of extra gain. To do this, open the Mixer, deselect all the Mixer strip types apart from aux and bus, select all the aux strips, and Alt‑click on the faders and the bus sends — this will set all levels to zero. If any of the effect auxes are distorting, you can drop their levels down. You’ll also need to perform a similar function with the sends on your tracks. Select all Mixer strip types apart from aux and bus, use Cmd+A to select all tracks, and then Alt‑click on the Sends on a single track. All Sends will then be set to zero.

If you want to bounce your send effects, you’ll need to create tracks for the auxes in the Arrange page.

So far, I’ve only been talking about offline bounces. If you are working in a hybrid fashion, with I/O plug‑ins on tracks and auxes sending and receiving audio from external hardware, you’ll need to take a different tack if you want to keep your outboard processing. As there’s no real‑time export function, you’ll need to solo each track and bounce them out in turn. It’s unlikely that you’ll want to do this with every track, so a combination of Bounce and Export should get you where you want to go — just be rigorous in naming your tracks so you can find them later.

The simplest way to make sure that tracks from your project can be easily loaded into another DAW is to export them all as individual files.

If you’re sending a project to be mixed, exporting all tracks individually is the best way to share audio. However, if you are sending audio to another member of the band for overdubs, it’s probably just going to annoy them to receive 200 separate tracks. It makes much more sense to send stems — ie. the keyboards, guitars, drums and what have you as pre‑mixed groups. The easiest way to do this is to group tracks into Summing Stacks by Shift‑ or Cmd‑clicking them and then right‑clicking on the selection and choosing Create Track Stack. Choose Summing Stack as the option in the Window that opens and rename the Stack to something useful.

Unfortunately, there’s no way to export these Stacks separately, so give them a name such as ‘X STEM Drums’ and ‘X STEM Guitars’, and also add an X prefix to any send effect auxes, eg. ‘X Snare Verb’ — but remember to also create a track for each of these in the Arrange page if you want to export the effect. If you have a lot of bus effects, you might want to drop these into a Summing Stack as well — call it ‘X STEM FX’. When you export, make sure the Pattern is set to just Track Name. If you go to the exported files folder in the Finder and select List By Name, you’ll see the ‘X STEMS’ and those effects that you’ve prefixed by a capital X at the bottom of the window. You can then Shift‑click all the other files and delete them, leaving just the stems. 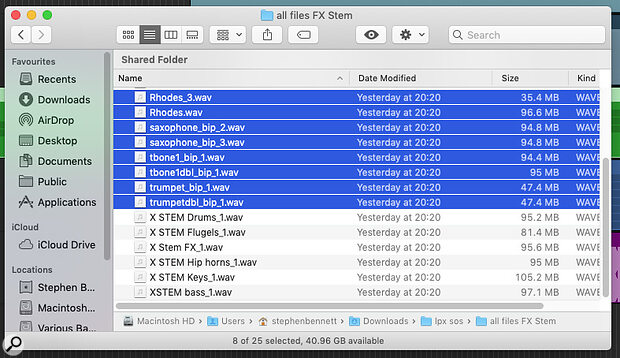 Prefixing your Summing Stack exports with an X will make them easy to locate in Finder.

Once you have exported your tracks and/or stems, you can then right‑click on the folder containing them, compress them, rename the archive to something useful and transfer them using the likes of Dropbox or WeTransfer. If you want to send a click track along with your exports, the easiest way is to create an empty instrument track, solo it, turn on the click, and bounce it to an audio file as an offline Bounce.

As with exporting tracks, things get a little more complex when you are working with hardware and stems/Summing Stacks. You’re going to have to solo each Summing Stack in turn and bounce it out in real time. You’ll also need to mute the effects stem (or aux tracks) as well if you want your stems dry — but soloing and bouncing the effect tracks or stems will render those as an audio file.

I’m sure you’ve all had the experience of loading up an old project and finding that many of the plug‑ins you originally used are not available, or that the software instruments have been upgraded and sound completely different. If you export tracks both with and without their effects and automation, and then reimport them into a fresh Logic Pro X project, they become a neat way of future‑proofing your work. It’s a faff, but it makes revisiting old projects much easier. You’ll thank yourself for doing it.

If you are working exclusively with audio files, exporting an Advance Authoring Format (AAF) file may be an option for sharing projects. This format can be read by other DAWs including the aforementioned Avid software. In my experience, AAF export and import is a bit of a hit‑and‑miss affair and doesn’t always produce the result you may expect, so if you want to be sure your recipient is getting the correct audio, I’d avoid AAF exporting.