If your song starts with a fill, as here, then the first transient probably won't be at beat 1, bar 1. You'll need to manually identify this beat.

Get to grips with Pro Tools' powerful beat manipulation tool.

Beat Detective can be thought of as a big macro of features, and though nearly all of those features are available elsewhere in Pro Tools, bringing them together into a single tool speeds things up considerably — at least, it does when you know what you're doing. Having introduced many new users to Beat Detective, though, I'm familiar with the look of disappointment in people's faces when they discover that it's not an automatic process and is far from a one‑button operation.

Most examples and online tutorials show performances which have been recorded with a click track but are just a little off. The aim there is to pull the performance into time with the grid, which is already roughly aligned with the performance tempo. But what if you've tracked a live band without using a click track? Setting up your session so the grid relates to the recording on the timeline is an essential first step to using Beat Detective. Here's how it's done.

Setting up your session so the grid relates to the recording on the timeline is an essential first step to using Beat Detective.

You'll also need to show the tempo ruler. You can get to this from the ruler's drop-down menu, or from the View / Rulers menu. Tempo in Pro Tools is potentially confusing because there are two tempo modes. Manual mode offers a single tempo for the whole session, and this can be set by typing the tempo into the Transport window or toolbar. If you can't see it, make sure the MIDI controls section is showing in either area. It's also possible to tap in your tempo, by highlighting the tempo field in the transport window, and hitting the T key in time with the music. Tap tempo isn't accurate enough for tempo mapping or quantising as errors will tend to accumulate and your grid will quickly wander out of sync, but to get a close starting point it can be very useful.

The second tempo mode uses the Conductor Track. When engaged, the session tempo follows tempo changes on the tempo ruler, and this can be used to build a map of varying tempos, so that rather than move the performance to fit a fixed grid, you get the grid to fit the performance.

I find the best way to start with a session which isn't recorded to a click is to take a hybrid approach, starting in manual tempo mode and moving on to the Conductor Track later. 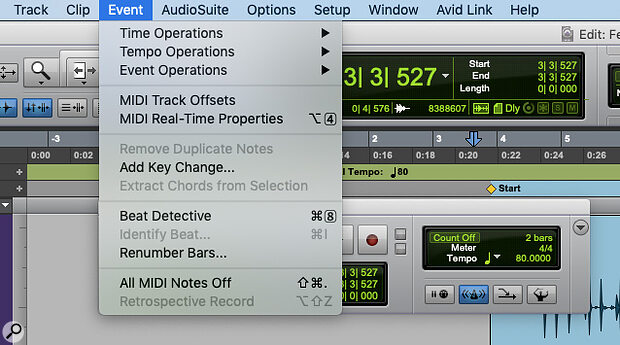 The Identify Beat command will be greyed out until you turn on the Conductor Track.

A useful first step is to manually identify the tempo, just so that you know what it is. It saves time if you make a mistake and incorrectly identify the tempo later. It will be discarded soon but it's so quick to do that you might as well. Create a click track from the track menu. Now, unless your track happens to be at exactly the default of 120bpm, the click will be so far out of time that it will be distracting, so best to disable it by clicking on the metronome button in the transport window or by hitting 7 on your keyboard's numeric pad.

Start playback in manual tempo mode and tap in the tempo. When you have the tempo the click will be roughly in time with the music but it won't be aligned with the beats. To fix this you need to tell Pro Tools where the first downbeat is. This is done using the Identify Beat command.

If your drums start at the first bar then you can identify the first kick drum (assuming there is a kick on the first beat) as beat 1 of bar 1, and you're all set. However, as a great deal of music starts with something other than the drums, and even music which does start with the drums usually involves some form of pickup fill, the first beat you Identify will probably be at a bar other than 1. In the example pictured there is a short pickup on the drums. My preference is always to work in multiples of four bars, so in this case I'll find the first downbeat and Identify it as beat 1 of bar 5, so that the first four bars only contain the intro fill. The best way to move the insertion point to this first hit is to use Tab to Transient.

The Tab key moves the insertion point along the timeline either to the head or tail of the next clip or, with Tab to Transient enabled, to the next transient in the waveform. To toggle between the two modes either click the Tab to Transient button below the Selector Tool or use the keystroke Command+Option+Tab (Control+Alt+Tab on a PC). Once you have located the insertion point to the correct beat, identify the beat from the Event menu. 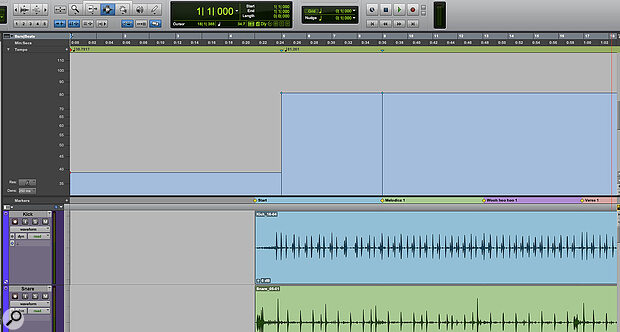 Once you've identified the beats of the first four bars, the Tempo Track will change to reflect that section's tempo.

If you are still in Manual Tempo mode you'll see that Identify Beat is greyed out. However, if you switch on the Conductor Track you'll lose your tapped-in tempo. The solution is to identify the beats at the beginning and end of a section perhaps four bars long. This will create two tempo events, one at each identified beat, and calculate the tempo between them. As you have already tapped in the tempo in manual tempo mode you know what it should be, so if you make a mistake and identify the wrong beats you'll get a different tempo. A small difference is expected but if it's well off then check which beats you have identified.

A useful shortcut to Identify Beat is Command+I (Control+I on a PC). This opens the Identify Beat dialogue, and if you are identifying beat 1 of a bar you can just type in the bar number and it will default to beat 1 when you hit OK.

Once you have the two tempo events identified (in my case, one at beat 1 of bar 5 and another at beat 1 of bar 9), you'll see three tempos in the tempo ruler. The first represents the tempo between the two identified beats, which should be a very precise tempo for that four-bar section. Then you'll see that same tempo persist until the end of the track (this may be reasonably accurate but will almost certainly drift as you go further along the timeline). Finally, you'll also see the tempo before the first tempo event. That will be at whatever value Pro Tools calculates between the song start marker (the red diamond at the beginning of the ruler) and the first identified beat. This isn't a meaningful tempo, and depending on your needs you can either disregard it or identify a beat earlier in the introduction, which can be done in exactly the same way if there is suitable audio to identify the beat from. If there isn't, then my preferred method is to copy a clip of a suitable number of bars length, paste it at the beginning of the timeline and place its tail exactly at the first identified beat, in this case beat 1 of bar 5. 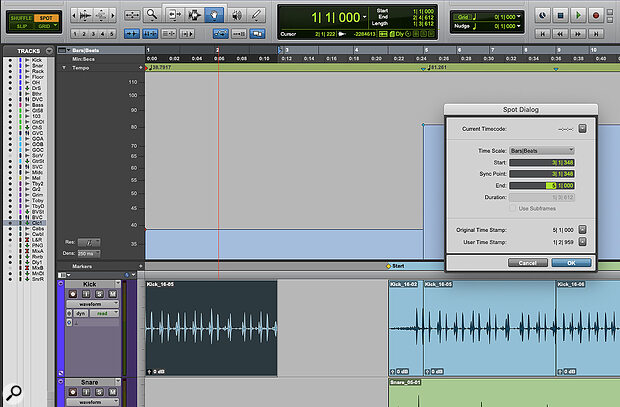 At first, the Tempo Track won't display the correct tempo in the beats leading up to the start of your song. You can fix this by copying a four-bar section from elsewhere in the song so that it ends on the first beat, and then identifying the beats of the copied section.

There are a few ways of doing this but I'd use Spot Mode. To Spot my copied four-bar clip to end at beat 1 of bar 9 so that it starts at beat 1 of bar 5 (which is where the head of my copied clip will be), I click Spot or hit F3, click on the copied clip with the Grab tool, and the Spot dialogue will appear. Type the bar and beat number of your first identified downbeat (in my case beat 1, bar 5) into the End field, and the clip will be placed at the desired location.

It's advisable to identify a beat at the end of the performance to stop the grid from wandering off as the song progresses, but there's no need to manually build a detailed tempo map, as this is one of the things Beat Detective can be used for. Now though, you have a grid which corresponds approximately with your audio and can start using Beat Detective to improve, and hopefully not spoil, your recording.