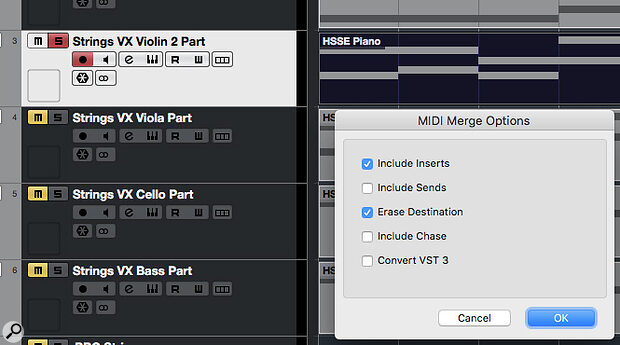 Merge MIDI In Loop can be used to render the notes created by Arpache SX and Transformer to regular MIDI clips for each string part.

Last month, we used Cubase’s Chord Track, Arpache SX and Transformer MIDI plug‑ins to create an almost‑passable five‑part string arrangement. However, we left off with the ‘performance’ sounding a little robotic, and perhaps a little too busy as well. So this month I’ll explore some more ‘fake it’ options that can create a better impression of ‘human’ parts.

Thin On The Ground

Five arpeggiators can generate lots of notes, so start by thinning out the parts a little. For example, the cello and double‑bass are often played more sparsely than the other strings. Suitable arpeggiator settings (for example, quarter‑note rather than 16th‑note step sizes) may already have helped, but further note muting may be required. It’s more common for the violas and violin parts to be a little busier but, even so, thinning these out a little can work wonders, especially if it helps the sequence ebb and flow between the different instruments.

Prudent thinning out of the arpeggiator note data can create more interesting rhythmical interplay between the different string lines.

Note‑thinning can also be used to create a more distinct rhythmic feel. For example, simply muting some notes in a continuous 16th‑note pattern can change the rhythmical emphasis of the part. This can be enhanced further if, in some sections of the sequence, you let different instruments emphasise different beats, while at other points you have instruments playing in unison.

Once satisfied with your thinning, unwanted muted notes can be deleted. To save doing this manually for each note, select all the MIDI clips and, from the MIDI menu, navigate to Logical Presets/standard set 1, and select the ‘delete muted’ option. It’s a really neat time‑saver!

While editing, another useful feature is the Key Editor’s ability to overlay multiple MIDI parts: you can see and edit, for example, the MIDI notes for both the 1st and 2nd violin parts in one window; enable the Key Editor’s Event Color controls in the toolbar if you want to see each part in a different colour.

Performance articulations are important if you want your virtual string performance to sound convincing.

The Art Of Articulations

Performance articulations are important if you want your virtual string performance to sound convincing. The HSSE3 Pro Large Strings VX preset used for my worked example includes two spiccato (short note) articulations; f and ff (loud and very loud). These suit the performance style I was attempting so, in most of the parts in my arrangement, I used the ff articulation on the first and third beats of a bar and the f articulation elsewhere, for some subtle variety and rhythmic emphasis.

For Cubase Pro users, the Expression Map system can be used to add and edit any required articulation changes.

For Large Strings VX, the keyswitches (MIDI notes outside the playable range of the instrument) for spiccato f and ff are D#0 and E0. Adding either note to the MIDI sequence means that from that point on any notes in the instrument’s playable range will play back using the corresponding articulation. For Cubase Pro users, the Expression Map feature is a more elegant articulation‑switching option. See the SOS January (https://sosm.ag/cubase-0110) and February 2010 (https://sosm.ag/cubase-0210) columns for more on this but, essentially, articulations can be displayed and their use sequenced in a Key Editor controller lane. There is a catch, though: while the Large Strings VX preset is supplied with an Expression Map, most third‑party VSTis are not. Still, creating one yourself is a straightforward, one‑off job, and there are some downloadable third‑party Expression Maps on Steinberg’s website too. 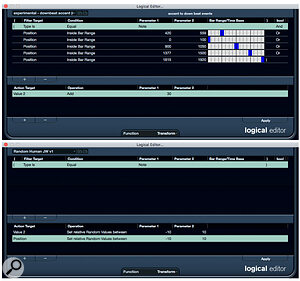 The Logical Editor can be used to add accents on the beat (top) and some subtle randomisation to velocity and timing (bottom) to improve the realism of the performance.

Some subtle velocity and timing variation can also help things feel more real. This can be accomplished with manual edits and in some cases (eg. adding a velocity data crescendo at the end of a phrase) this is the easiest method, but Cubase also offers some shortcuts. For example, in many forms of music accenting notes that fall on the beat can clarify the rhythmic nature of the performance: a Logical Editor preset will do this for you. With the desired MIDI clip(s) selected, from the MIDI menu, select the Logical Presets/experimental/downbeat accent (4/4) option (it assumes your time signature is 4/4). The settings this applies are shown in the screenshot; open this preset in the Logical Editor and you can adjust these to taste.

To my surprise, I found that the current collection of Logical Editor presets lacks a simple ‘humanise’ option, but the commands required to create your own preset are simple, as shown in the final screen. In the upper pane, the preset selects all objects in the selected clip that are notes. It then applies two actions, defined in the lower pane, which apply a small amount of randomisation to each note’s velocity (cryptically labelled Value 2!) and start position. Adjust the values if you want more or less ‘humanisation’.

If you wish, without manual editing, to add a more defined top‑line melody or counter‑melody (counterpoint) to your arp‑inspired string arrangement, the StepDesigner MIDI plug‑in is worth exploring. StepDesigner makes it easy to experiment with adding and subtracting notes to/from a short sequence, and put a Transformer plug‑in after StepDesigner and whatever changes you make in the step sequence can be automatically corrected to a key/scale combination. Once you have something you like, Merge MIDI In Loop can again be used to render the result as a conventional MIDI clip for further manual refinement.

In my main example, I started with a sequence of simple sustained chords, divided the chord notes between various string sub‑sections, and then applied some arpeggiator ‘magic’ to create single‑note performances for each instrument. But other starting points can also deliver interesting results. For example, rather than split the notes from the chord sequence before applying the arpeggiation, you could start by applying a single instance of an arpeggiator to the full chords. Transformer can be used again, to keep everything in the desired key/scale, and once you have something promising, Merge MIDI In Loop can create a conventional MIDI clip with all the notes from the arpeggiator. The notes from this clip can be copied to each individual string‑instrument track for manual editing. For comparison, I’ve included another audio example using this alternative starting point; you’ll find all examples at http://sosm.ag/cubase-1220. The two approaches have generated different, but complementary musical, outcomes from the same chord sequence starting point.

I’ve kept things simple here to demonstrate the workflow, but if you want to attempt a full orchestration, there’s nothing to stop you applying the same ‘fake it’ approach to the brass or woodwind sections. That said, if the results are going to have a chance of sounding authentic, our arp‑based cheats will need to be applied with some sensitivity to the roles and ranges the various instruments generally play, and to that end a little knowledge can go along way — so I’ll point you once again to Dave Stewart’s ‘The Sampled Orchestra’ series (https://sosm.ag/the-sampled-orchestra-pt1) and leave you to do some homework!