Cubase can help you write and arrange realistic string parts.

Credible string arrangements can add a real touch of class to your productions. Dave Stewart’s four‑part Arranging For Strings (part 1: https://sosm.ag/string-arranging-pt1) and nine‑part The Sampled Orchestra (part 1: https://sosm.ag/the-sampled-orchestra-pt1) are great places to start learning, but in the meantime Cubase offers some tools that can help you get ideas down quickly. There’s lots of ground to cover, so I’ll cover this subject in two tutorials, Part 1 this month and Part 2 next.

Cubase includes some impressive virtual instruments, but multi‑articulation (performance‑style) orchestral sounds are thin on the ground. Still, the Large Strings VX preset in the Halion Sonic SE Pro soundbank that comes with Cubase Pro is very usable. It includes eight articulations, and while it’s an ensemble patch (all strings at once, rather than in separate instruments) it’s good enough for the examples that follow.

If you want a more capable library with separate string instruments, a third‑party option I can recommend is Spitfire Audio’s BBC Discover. It’s inexpensive anyway but free if you’re prepared to sign up and wait two weeks. It’s a super‑compact taster of the full version of their BBC Symphony Orchestra library, and includes separate bass, cello, viola and violin patches, each with long, spiccato, pizzicato and (with the exception of the double bass) tremolo articulations. If you want something more fully featured than this, and are prepared to pay, check out the aforementioned Dave Stewart series for some recommendations.

Once you’ve chosen your instrument(s), add some tracks to a Cubase project. Even if, as here, you’re using an ensemble patch, create separate tracks for double bass, cello, viola and first and second violins, as this is how they’d conventionally be arranged/scored in a real orchestra.

For the example, I aimed to create a kind of rhythmic performance based on short (staccato) notes. But whatever performance style you want, the starting point when ‘faking it’ like this can be the same: a single MIDI part with some simple, sustained chords to define the chord sequence. These can be played in, or created using the Chord Pads (www.soundonsound.com/techniques/strike-chord). 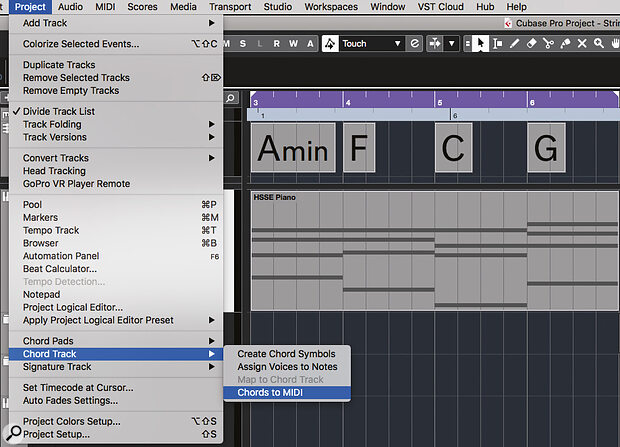 Cubase’s Chord Track allows you to explore your initial chord‑progression options and then makes it easy to create a clip with the sustained MIDI notes you need to get started.

For my example, I used the Chord Track (see June 2013: www.soundonsound.com/techniques/re-chord-industry) to create a simple four‑chord sequence, using an HSSE acoustic piano preset. Once happy with the sequence, I selected the piano track and executed the Project/Chord Track/Chords To MIDI command. This created a MIDI clip on the piano track containing block chords derived from the Chord Track.

Generally, each string subsection in an orchestra will play one note at a time. By combining the notes from each subsection, a full chord can be voiced. If more notes are needed, a subsection may play divisi (divided in two, each half playing a different note), but this halves the impact of each note. You can break such conventions when using virtual instruments, but I’ll aim for realism here (as you must do if writing parts that will later be played by a real string section).

Your next task, then, is to allocate the notes of each chord across the five string subsections. An easy starting point is to assign the highest note to the first violins, the second highest note to the second violins, the next to the violas. The lowest goes to the double‑basses, but can be doubled an octave (or perhaps a fifth) higher by the cellos. For our block four‑note chords, it’s easy to copy the MIDI clip to each of the respective string MIDI tracks and then delete/mute the excess notes in each copy, leaving only the notes required for each subsection.

Check that the notes are in a suitable octave for the real instruments: A7‑G3 for the violins; A6‑C3 for the violas; A5‑C2 for the cellos; and G4‑E1 for the double basses. For my example, I ensured the notes were in the lower/mid portion of each instrument’s range, leaving me some room to tweak.

For something that’s rhythmically and harmonically more adventurous, a MIDI arpeggiator plug‑in or, better still, several of them, can help. 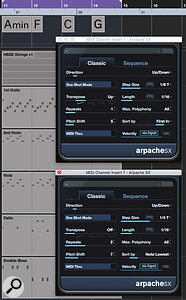 Arpache SX offers plenty of creative options. Shown here are settings for my viola (upper) and double‑bass (lower) parts. The MIDI clips in the background show the eventual output from the arpeggiation process for each of my five string parts.When a little velocity and volume automation is added, and appropriate articulations are used, the sustained single‑note parts for each subsection can combine to make perfectly acceptable string ensemble chords. But it’s not much of a ‘performance’, so for something that’s rhythmically and harmonically more adventurous, you can turn to a MIDI arpeggiator plug‑in or, better still, several of them.

There are several possible options here, but one is to place individual instances of your arpeggiator on each of your string tracks. For the example, I did this with Cubase’s Arpache SX and followed each instance with a Transformer MIDI plug‑in. The latter’s Transpose To Scale function is essentially a MIDI note pitch‑correction processor, and here it ensures that Arpache SX’s output will always remain harmonically correct. (Of course, ‘wrong’ notes can sometimes sound cool too, so you can always experiment with bypassing Transformer to see what happens.)

The key to coaxing something interesting from this setup is to use different settings on each instance. In the screenshot, the upper instance of Arpache SX is used for the viola. A Step Size of eighth‑note triplets is combined with an Up Transpose setting, one Repeat and a Pitch Shift setting of 5. This results in a fairly brisk sequence of short notes from each of the sustained notes going into the arpeggiator. In contrast, for the double‑bass, I used a quarter‑note triplet setting with the Transpose off. This produces a less busy but still rhythmic performance, in which the pitch simply follows that of the input. When the two parts are combined, their rhythmic interaction is pleasing, and there’s also some melodic content.

By applying these principles across all five string tracks, with suitable experimentation (and a bit of luck), your arp‑fuelled string section will hopefully now play something that: (a) is rhythmically interesting; (b) has harmonic movement that follows the chord changes; and (c) remains in the correct key/scale. The performance might sound a little robotic and perhaps a little on the busy side, so next you’ll probably want to turn your attention to some manual editing. And that’s where we’ll pick up next month.

In the meantime, check out the audio examples (https://sosm.ag/cubase-1120) that illustrate the steps we’ve taken so far and, by way of a teaser, also reveal how the same arrangement will sound after a little more tweaking.