Q. How do I set up a gated reverb? 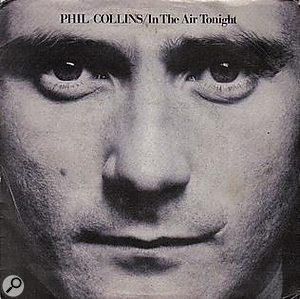 I am trying to recreate the famous gated reverb effect on Phil Collins's records. I have used many of the modern digital reverbs and plug-ins and whilst they do a good job, they don't seem to have quite the same power as something like the tom break on 'In The Air Tonight'. Can you tell me how the original effect was created?

Sound library developer and SOS contributor Steve Howell replies: Without wishing to be too pedantic, strictly speaking, the classic gated reverb effect attributed to Phil Collins was actually created by Peter Gabriel some time earlier and, interestingly, quite by accident.

They were setting up a kit for recording, and there just happened to be some sends on the channels being used for the drum mics going to an AMS reverb — and the reverb's returns just happened to be patched into two channels that just happened to have some noise gates strapped across them! As the drums were being tuned and hit and miked up in the studio, listeners in the control room heard the fabulous sound of the reverb being abruptly cut short by the gates on the returns. Rather than 'fix' this, Gabriel exploited it and it became a trademark sound on his third album, particularly on the opening track, 'Intruder'. 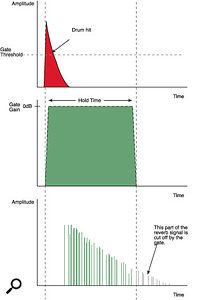 The initial drum hit (top graph) triggers the gate (middle graph) which allows the reverb to pass through (bottom graph).Of course, Collins played drums on that album and he 'borrowed' the technique (and the recording engineer!) for his first solo album, subsequently making it famous on his massive hit 'In The Air Tonight'. Collins thus acquired credit for the effect by assumption when it was, in fact, Peter Gabriel with producer Steve Lillywhite and engineer Hugh Padgham who were really responsible for this dramatic sound. AMS loved the sound so much, they recreated the effect in the 'Non Linear' preset for their digital reverb — which was subsequently copied by other digital reverb manufacturers, with varying degrees of success. But I digress...

To create that effect authentically, send the drums to a reverb with a medium room preset selected. Now route the output of that reverb through a stereo noise gate (or patch a stereo noise gate into the reverb's return channels) and set an instant attack and pretty much instant release. The gate's hold time can be adjusted to taste, but the threshold should be adjusted carefully to avoid any 'fluttering' during the final part of the reverb tail. For more accurate triggering of the noise gate, take a feed from the drums into the gate's side-chain so that the percussive attack from the drums is used to trigger it, rather than the onset of the reverb alone.

Of course, for the most authentic results, consider the equipment used at the time — early digital reverb through analogue noise gates. Consider, also, the source — world-class drumming on impeccably tuned kits through serious mics set up by a highly experienced engineer and recorded to analogue tape through an SSL desk. The sound produced by some generic drum samples running through 24-bit VST effects is likely to be too clean to have the full impact.