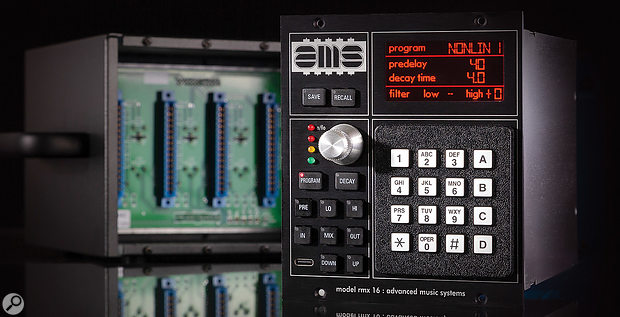 The most classic of '80s reverberators has been reinvented — complete with retro controls — for the 500-series.

Advanced Music System's RMX16 is one of the all-time classic digital reverberation processors and, nearly four decades since its launch, the original hardware units are keenly sought after — today, a vintage RMX16 in good condition changes hands for around £2500$3000. It was essentially an upgraded version of the little-known but genuinely ground-breaking DMX15R, which was the very first microprocessor-controlled, full-bandwidth, digital reverberator, and was introduced in 1981.

We now take decent A-D/D-A conversion in audio products for granted, but these were some of the most complex and expensive parts of the early digital audio products, so while the (2U rackmounting) DMX15R contained all the digital processing gubbins, memory chips, controls, and displays needed to run AMS's nine innovative reverberation algorithms, it was given no analogue I/O of its own at all. Instead, it was delivered as an expansion unit that had to be connected into the back of AMS's DMX15‑80 digital delay line — it made use of the DMX15‑80's converters and the associated discrete-component analogue anti-alias and reconstruction filtering. In spite of this, the DMX15R quickly built a keen following and this prompted AMS to create, in 1982, a fully integrated, stand-alone model, with its own internal converters — the RMX16, whose controls, displays, operation and nine reverb programs were identical to those of its forebear. The only obvious difference to the casual eye was the addition of a pair of rotary controls on the left of the front panel to set the input and output levels

Those who want the sound but can't justify the cost of original hardware (or its ongoing maintenance) now have options in both plug-in and hardware forms. Back in late 2014, Universal Audio introduced a plug-in version, for their UAD platform, which provides an impressively accurate rendition for rather less than a fifth of the typical second-hand hardware cost (although a UAD DSP system of some form is obviously required to run it). The remarkable accuracy of the plug-in is due to AMS Neve's engineers — led by Mark Crabtree, the original designer — painstakingly porting the reverb algorithms directly, byte-for-byte, from the original code to run on the UAD platform's SHARC chips. The UA team also modelled the precise characteristics of the original converter circuitry, since these played a significant role in the RMX16's overall sound. (The A-D stage used a 12-bit converter, with two extra bits for gain-ranging to extend the dynamic range, and this data was then...