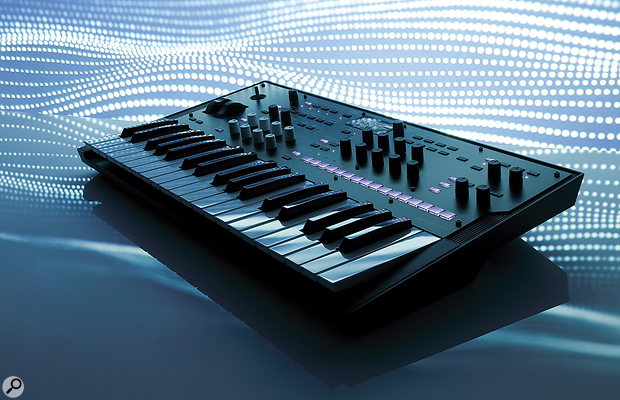 Wave Sequencing is back — and this time it's got knobs on!

From the WS‑1 keyboard in 1990 to the SR rack released in 1992, the Wavestation family remained in production for only five years or so before being discontinued. I thought that that was a great shame, but the huge amount of resources that Korg poured into the Prophecy, the Trinity, the original OASYS and the Z1 in the mid-'90s meant that the company never returned to the Wavestation. Happily, its Wave Sequencing technology didn't disappear entirely, resurfacing as a soft synth in 2004, and in limited form in the OASYS and the Kronos. But now, a quarter of a century since the last Wavestation was discontinued, there's a new kid on the block. Is it an update of the original Wavestation, a completely new beastie, or does it lie somewhere between?

The Wavestate's synthesis engine is based upon samples and multi-samples called Waves, and you can play these individually or string them together to create all manner of rhythmic sequences and evolving sounds. But if you're tempted to believe that the Wavestate is a 'bigger' Wavestation you would be wrong in one important respect. Whereas the earlier synth allowed you to allocate one Wave or Wave Sequence within a Voice, four Voices to a Patch, one Patch to a Part, and then eight Parts to a Performance for a total of up to 32 sound sources per note, the Wavestate allows you to allocate one Wave or Wave Sequence within a Voice, one Voice to a Program, one Program to a Layer, and then four Layers to a Performance, which means that it offers a maximum of just four sound sources per note. Consequently, it can't recreate the monumental textures and 'songs under a single note' produced by its ancestor. But it's still able to produce an incredible range of superb sounds — indeed, I would suggest a wider range than before, so how does it do it?

To answer this, let's start by returning to the Waves from which sounds are built. There are a lot more of these than before and they occupy a memory that Korg describes as "a thousand times larger" than the Wavestation's. Since the ROM in the original Wavestation extended to just 2MB, this means that, despite exaggerated claims made elsewhere, the Wavestate offers around 2GB of samples. This memory is not a ROM, which means that it should be possible to overwrite it, but there's no suggestion at this point that you will be able to load your own samples into it. Some people have already suggested that this is a significant shortcoming, but I don't see it that way. The underlying library is huge, and I doubt that you'll fail to find something that allows you to build the sounds you want. In addition, many of the samples offer start point offsets, which means that you can play them from their beginnings or from a number of pre-selected points after that. This allows you to create a far wider range of sounds than would otherwise be possible.

You can program sounds using single Waves, but the real character of the Wavestate is revealed when you combine Waves into Wave Sequences. To understand these, you have to dispense with the concept that a note, or even that a given moment within a note, has this pitch, this tone, this duration, and so on. Instead, you have to treat all of these as independent variables that can be combined in different ways.

Let's say that you want to create a sound that starts with a piano sample, followed by a flute sample, then a human voice sample, and so on up to a maximum of 64 samples. Having inserted the appropriate Waves into a thing called a Sample Lane, you can then determine the order in which they're heard by creating a loop with your choice of direction (forward, backward, forward/backward) and your choice of start and end points.

Now let's hypothesise that you want the durations of each of the steps containing the Waves to be different from one another. You do this in the Timing Lane, which can have a different set of loop values. Furthermore, the Timing Lane isn't constrained to having the same number of steps as the Sample Lane so, in principle, things are already becoming quite complex as the two Lanes shift against one another.

OK... now let's hypothesise that you want the pitches of each of the Waves to be different from one another. To make this happen you populate the Pitch Lane, which can have a different length from either of the previous Lanes, as well as different loop points and a different choice of direction.

Now play a note. As the sound progresses, steps are generated as determined by the Timing Lane but, as long as the other Lanes are not identical with it or each other, the relationships between tone, duration and pitch create patterns that can take a long time to repeat.

You can make things even more interesting by populating the other four Lanes. These are the Shape Lane, which applies a contour within a given step; the Gate Lane, which determines for how long a given Wave sounds within its step; the Step Seq Lane, which generates a modulator that you can direct to hundreds of destinations; and the Master Lane, which allows you to reinitialise the other six Lanes after a chosen amount of time.

If that weren't enough, each step has a Probability associated with it that, within certain boundaries, determines how likely it is to play. Furthermore, many of the parameters determining each Lane can be modulated using things such as LFOs, contours, the vector envelope and the Wavestate's four arpeggiators, and you can even point multiple modulators at a single destination simultaneously. The possibilities are mind-boggling.

There's no room here to discuss all of the Lane parameters, but one deserves special mention. This is Xfade, which allows you to determine how one step evolves into the next. Transitions can range from abrupt changes to smooth morphs with your choice of crossfade curve and, by modulating the length of this crossfade, you can morph from a smoothly evolving sound to something percussive and back again (or anywhere between).

Putting this all together allows you to obtain sounds ranging from complex step sequences where the Pitch lane produces melodies, to repeating patterns, to smooth timbral morphs that sound similar to wavetable synthesis, and much more. (With a careful choice of Waves and transitions, I was able to create sounds that wouldn't have disgraced a PPG and, given time, I suspect that I could have imitated a D50 by placing an attack sample in front of a single-cycle waveform.) Of course, creating musically useful sounds takes a certain amount of self-control. My first experiments threw the kitchen sink at the system, but it was when I started to restrain myself that my sounds became much more interesting.

The Wave or Wave Sequence that you define is, in effect, the oscillator in a Wavestate Voice, and its output then passes through that Voice's resonant filter and amplifier. The filter section offers no fewer than 12 types, with numerous options including emulations of the MS20's high- and low-pass filters and the Polysix's SSM2044 filter, and these allow you to craft myriad sounds that you can't obtain from the non-resonant low-pass filters on the Wavestation. There's also a new Multi Filter, which blends the outputs from the dry signal and the outputs from low-pass, high-pass and band-pass filters (some with inverted polarities for even more creative possibilities). Take a single Wave and experiment; the range of colours that you can obtain — especially if you define your own blends — is huge and, since there are many modulation destinations within the Multi Filter architecture, you can obtain some amazing results.

A Voice also includes three ADSR contour generators, four complex LFOs and two Modulation Processors that can do things such as emulate an electronic switch to select between two modulation sources, add offsets and gain to them, quantise their outputs, scale them and multiply them by curves, smooth them and sum them. Furthermore, every modulator can itself be modulated by an Intensity Modulation Source so, for every modulation path that you create, the amplitude at any given time can be the product of Modulator #1 x Modulator #2. Again, the possibilities are almost endless.

The next level up is called a Program. This adds three dedicated effects processors to the Voice. Placed in a fixed series, these are called Pre (nine effects types including waveshaping and ring modulation), Mod (15 types) and Delay (five types). You can access all of the effects' parameters using the menus, but the four most important (typically speed, depth, some form of tone, plus wet/dry mix) can be controlled from the panel using the two dedicated knobs and their Shift functions. I found many of the Wavestate's effects to be extremely useful, so I'm not going to grumble about the lack of detailed programming on offer but I still have a complaint; it's almost impossible to tweak them while playing because to do so often requires both hands. And while I'm moaning, the manual is very skimpy when it comes to describing the effects, with none of the block diagrams and detailed explanations that I've come to expect from Korg.

Moving up again we come to the Layer, which adds an arpeggiator to the Program and allows you to determine things such as its volume, the MIDI channel to which it responds, the keyboard- and velocity-zones over which it plays, and any MIDI filters that you want to invoke to affect its performance.

Finally, we reach the top level of sound creation. A Performance includes up to four Layers and adds a Vector Envelope Generator that updates much more quickly than the Wavestation equivalent, plus a global Reverb and a four-band parametric EQ. This is also where you can select two alternative tunings for the sound — Arabic, Pure Major, Pure Minor, Werkmeister and so on — and flip between these. The modulation potential of the Wavestate at the Performance level is astounding, with more than 1000 destinations available. Furthermore, I never reached an upper limit on the number of modulation paths that I could create, and I also failed to reach a limit on the number of modulators that I could route simultaneously to a single destination. (I believe that the limit is 30 or so.) I think it's fair to say that you're never going to run out of new ways to modulate Performances.