Korg’s Modwave is a wavetable powerhouse that can import Serum wavetables without conversion.

Korg are on a roll. Their midrange synth line‑up — the Wavestate, OpSix, and now Modwave — offers complex synthesis in affordable packages. The Wavestate resurrects Korg’s Wave Sequencing synthesis, first introduced by the Wavestation. The OpSix tackles FM synthesis. The latest member of the team, ModWave, takes on the challenge of wavetable synthesis.

Like the Wavestate and OpSix, the Modwave is built around 37 full‑sized keys which offer velocity but no aftertouch. The mod and pitch wheels are above the keyboard and, above those, the Modwave adds a ‘Kaoss Physics’ pad — a touch‑sensitive X‑Y pad that can be assigned in the modulation matrix and has some neato gravity‑based physics modes to create interesting modulation shapes.

The Anatomy Of A Patch

The synth is capable of 32 stereo voices. As well as two wavetable/sample oscillators, there is a digital multimode filter, four envelopes, five LFOs, two modulation processors, four effects slots with around 30 effects to choose from, motion sequencing and the aforementioned Kaoss Physics.

A Performance is the highest level of preset, saving the entire state of the sound engine. Each Performance contains two Layers (A and B), a master EQ, reverb, Mod Knob assignments and Kaoss Physics. Each Layer contains a Program (a basic sound), an arpeggiator, and key or velocity split settings. Programs are made up of two oscillators, a sub‑oscillator, filter, amp, motion sequences, modulations and three effects.

Thanks to some good MIDI implementation, it is possible to use the Modwave in a two‑part multitimbral configuration. Different MIDI channels can be assigned to the two Programs and sequenced separately.

Each oscillator can operate in one of three modes: simple wavetable, dual‑wavetable (with crossfading), or sample mode, which allows you to play back factory multi‑samples. Over 200 wavetables ship with the Modwave and everything is categorised to make browsing easier. You can also import wavetables using Korg’s Editor Librarian software. Wavetables are in 2048 sample, 32‑bit floating‑point format, so many wavetables created with software like Serum or WaveEdit will work without any conversion needed.

Wavetables can be manipulated in several ways. Position moves through the wavetable as you would expect. Morph applies an algorithmic function like Sync, Stretch, Flip, Mirror, FM, AM and ring mod. Most are available for both oscillators, except the last three — FM, AM, and ring mod — which are only available on Oscillator 2 because they use Oscillator 1 as the modulator. The Morph algorithms offer an impressive palette of mangling opportunities.

In addition to Position and Morph, each wavetable can load a Modifier that applies a fixed harmonic function. These include filtering out odd or even harmonics, clipping specific harmonics, removing high or low harmonics, quantising bit depth, tilting harmonics and simple overall gain changes (for balancing the levels of wavetables in A/B mode). Although the Modifiers are static functions with no adjustable parameters, they are still useful. For example, load the same wavetable into A and B, apply a Modifier on B, and use the A/B Blend to crossfade between modified and unmodified versions.

The sub‑oscillator offers triangle and square waveforms up to two octaves below Oscillator 1. It also doubles up as a noise generator, with five types of noise. This means that you can’t use noise and the sub‑oscillator at the same time.

The entire signal flow of the synth is stereo, so oscillator panning will be preserved until the signals hit the effects section. It opens up sound design potential for having two oscillators panned left and right, both with different wavetable settings. One feature I would have liked to see was the ability to copy and paste oscillator settings which would help with creating wide stereo patches with minor sonic differences on both sides, but as it is you have to copy the settings over manually.

My opinion is that wavetable synthesis is the king of pad sounds. And the Modwave doesn’t disappoint.

A plethora of filter options are available to further mangle the two oscillators. Choose from Polysix modelled low pass, MS‑20 modelled low or high pass, multimode capable of various types including band pass and reject, or the Multi‑filter where you can choose and crossfade between two filters from a long list, many of which themselves have two or more filter types in various series and parallel configurations. In short, you’re unlikely to feel short‑changed for filter options.

The filter section includes sub‑pages of options to tweak the response of the filters. These will change depending on the filter type you have chosen but can include bass response tweaks, crossfade amounts (for multi‑filters), an extensive keytracking section (allowing variable slopes and breakpoints across the keyboard), and a handful of pre‑chosen modulation source amounts such as LFO and envelope. This is a recurring theme amongst various sections of the synth, where basic functions (eg. cutoff, resonance, envelope amount) have front‑panel controls, but less‑used parameters are found on sub‑pages.

With four envelopes, five LFOs, seven lanes of motion sequencing, four macro knobs, Kaoss Physics, and all the usual MIDI sources — including poly aftertouch — there is no shortage of modulation possibilities.

The four red knobs on the front panel are the ‘Mod knobs’. These are assigned by sound designers at the Performance level. They can be named and will show their names and values on the master Performance page, where you can also see which Programs are loaded into the current Performance along with a nice graphic of the Kaoss Physics.

Several modulation sources are predetermined to get you up and running quickly. Envelopes are named Filter, Amp, Osc1 and Osc2 to show their predetermined routings. Similarly, the LFOs are named Pitch, Filter, Amp, Osc1 and Osc2 (this time going to the Osc Morph parameter instead of Wavetable Position). Of course, these routings can be ignored if desired. The modulation matrix allows for modulation of almost anything, even including individual Motion Sequence steps and effects parameters.

Interestingly, Korg chose simple ADSR envelopes for the Modwave, and whilst there are adjustable curves for each stage, I would have liked to have seen at least one more complex envelope type. This is mitigated by the fact that you can assign other modulation sources as envelope triggers, meaning that you could, for example, have the mod‑wheel trigger an envelope instead of a note‑on. I must say, I love this feature. It opens a world of sound design possibilities. 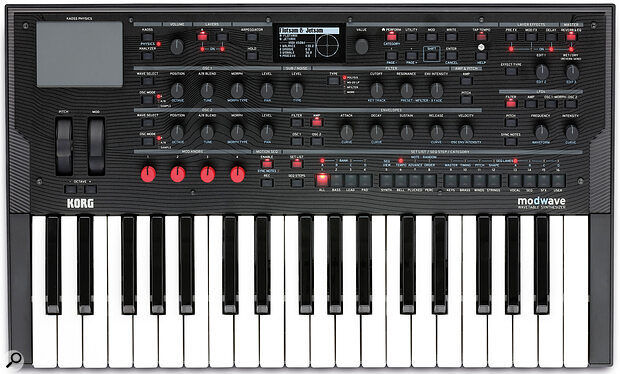 The Modwave shares the same dimensions (565 × 338 × 92 mm) as the Wavestate and the OpSix, which makes you start to think how nice they’d all look on a stand together...

Motion Sequencing offers a sophisticated step sequencer derived from Wavestate’s Wave Sequencing. There are seven lanes which can have different loop points and direction. There are lanes for pitch, timing and shape, plus a master lane that can reset the others. Then there are four freely assignable lanes.

The Shape Lane is interesting. It can create contours for each step which modulate the amount of another lane. Each step can contain a different contour shape, from simple single‑cycle waves to miniature envelopes, to double, triple and quadruple shapes. The timing lane changes the length of each step, which also affects other lanes. The timing and shape lanes are particularly effective when combined with lanes that have different lengths. Throw in step probability, random ordering, note‑on advance, up to 64 steps per lane, and modulation of individual steps from other modulation sources and you have a sequencer capable of anything from simple loops to ever‑evolving pseudo‑generative sequences that will go on for days.

In addition to the sequencing, there is also a simple arpeggiator. There isn’t much beyond the usual parameters like resolution, note order, octaves, gate length, sync, etc, but it can work very well in conjunction with Motion Sequencing to add further complexity.