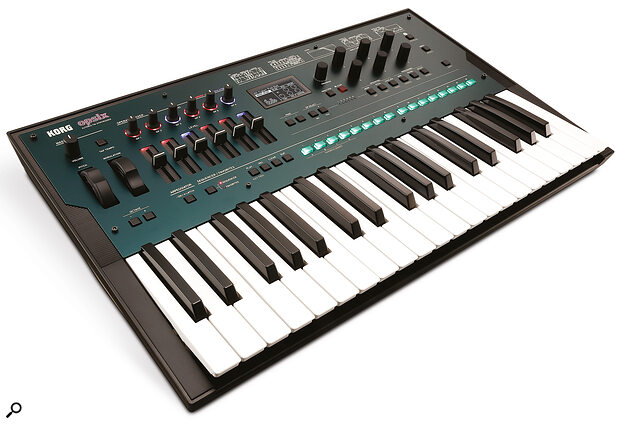 When Korg showed a couple of concept synths at the 2020 NAMM Convention many eyes turned to something called the Opsix, which looked much like a 21st‑century DX7; solid, and complete with a full‑size five‑octave keyboard. But when the pre‑production Opsix was deposited on my doorstep a few months ago it was a very different beastie — small, light, and with a 37‑note keyboard. So, how well has Korg’s enhanced FM sound engine been squeezed into another of its baby synthesizers?

Instead of conventional analogue or digital oscillators, FM synths have Operators that each comprises a waveform generator and a dedicated envelope generator that controls its pitch, as well as various inputs that allow other mathematical functions to affect its level and pitch. These Operators can then be combined in various ways in a given Program using an ‘algorithm’. In the simplest case, two Operators can sit side‑by‑side to be mixed like two conventional oscillators or the output of one (the ‘modulator’) can feed the frequency control input of the other (the ‘carrier’) to create new tones that can then be made to evolve in interesting ways. You might think that this architecture would be insufficient to create useful sounds, but synth history proves otherwise: in the early ’80s Yamaha launched four important preset synths based upon 2‑op FM — the GS1, its sibling the GS2, plus the CE20 and CE25. But it was Yamaha’s programmable 6‑op architecture with its 32 preset algorithms that, for most people, has come to define FM. That’s not surprising; I’ve just described the DX7.

As its name implies, the Opsix is also a 6‑op synth, but it isn’t constrained to conventional FM synthesis because its Operators offer four additional modes of sound generation. Furthermore, each Operator generates no fewer than 21 initial waveforms. The first three of these are sine waves of various resolutions, and these are joined by a triangle wave and two approximations to sawtooth and square waves. There are then 11 ‘additive’ waves and two noise generators. The Opsix also offers 40 preset algorithms and you can add a 41st that you design yourself using the User Algorithm programmer (see box).

The first synthesis mode is DX‑style FM with an additional Width parameter that determines the duration of the selected waveform as a percentage of the wavelength at any given frequency. If this sounds a bit exotic, don’t worry, it’s obvious when you use the on‑board oscilloscope to show you what’s going on, and it allows you to obtain spectra that reach far beyond the 21 starting points.

The second is ring modulation. Here, the signal produced by the modulator can be rectified by a user‑determined amount and then, when directed to the carrier’s modulation input, it generates amplitude modulation rather than frequency modulation. A mixer then allows you to determine the proportions of the original carrier and the AM‑derived signals sent to the next stage in the signal path.

The third mixes the modulator and carrier signals and then passes the result through a dedicated resonant filter that tracks the carrier pitch. Twelve filter types are available including emulations of the MS20’s low‑pass and high‑pass filters.

The fourth passes the carrier signal through a filter that again tracks the carrier pitch, but uses the modulator to modulate that filter’s cutoff frequency. I like this; there are things that you can do with filter FM that are hard to emulate by other methods.

The final mode is a waveshaper. This allows you to control the level of the Operator’s output, and folds back any waveform that protrudes above a fixed threshold. At low gains this makes the signal brighter; as you increase the gain the sound can become extreme and harsh, especially when you fold the waveform multiple times. You can also add a DC offset, which changes the harmonic structure of the output in yet more ways. (For example, you can bias the wave so that only one ‘side’ is folded, which sounds quite different from symmetrical wave folding.) If this were the only mode offered by the Opsix, you could still spend a good chunk of your life experimenting with it.

In all five modes, you can decide whether an Operator tracks the pitch that you play or has a fixed frequency. If the former, you can tune it to ratios of the fundamental (octaves, fifths and so on) and detune it. But whereas the DX7’s lowest ratio was 1/2 (an octave below the fundamental) the lowest on the Opsix is 1/128, which can send the Operator deep into...