Kaoss Pads are a well‑established part of Korg’s back catalogue, but we’ve not seen one in a while. Kaoss Physics adds an element of gravitational physics modelling. It works by giving you a ‘ball’ that you can throw around the two‑dimensional X‑Y pad. There are over 70 presets which will determine how the ball behaves once thrown. These range from simple bouncing ball algorithms, to planetary gravity simulations and endless wall‑less spaces (old‑school gamers, think Asteroids). Some presets introduce a third dimension (height) which can cause the ball to roll down a hill or into a valley.

You launch the ball by flicking a finger across the X‑Y pad. Speed and direction will give the ball its starting inertia and you can tinker with friction, tilting of the X‑Y pad and slowing down or speeding up time. Triggers can also come from sources like note‑on, mod wheel and even the Kaoss modulation itself.

All of this generates four streams of modulation: the X and Y positions, distance from centre and angle (relative to X‑axis). These can be assigned freely in the modulation matrix. If you prefer, the Physics element can be disabled and the Kaoss pad can be used as a more traditional X‑Y pad.

Kaoss Physics is fascinating to watch and offers a unique modulation source you won’t find elsewhere. Korg have clearly had some fun with it.

A generous number of effects and effects slots are available. Each layer can have three insert effects and there’s a master reverb and EQ available to the Performance.

The Master reverb and EQ work on the entire Performance. Each Layer can send to the reverb individually. The EQ works across the entire mixed output. The master reverb gives a choice between two reverb algorithms, one for smaller rooms and ambiences and the other for longer, complex reverb tails.

All the effects, except for the master EQ, work in the same manner. You choose an effect type, say Vintage Chorus. Then you choose a preset. You have three macros to tweak, plus a wet/dry control. The macros can alter multiple parameters under the hood and will vary from preset to preset. In practice, you have to scroll through the presets to find one close to what you’re looking for, then hope that the three macros can get you closer. It’s a shame the effects aren’t fully editable from the synth, but it’s understandable as I suspect it would result in many pages of parameters. The good news is that the effects can be fully edited from the Editor Librarian software (see the ‘Editor Librarian’ box). The effects are of excellent quality — better than most bread‑and‑butter effects found on synths. The modulation effects struck me as particularly good.

This is a complex synthesizer. In many ways, it reminds me of synths of the ’80s and ’90s. It packs in way more parameters than can comfortably be accessed using the front panel controls so there is a lot of scrolling through pages. I can’t decide whether Korg have gone a little too far in this regard. The concept of a Performance (where you can layer multiple patches) was largely dropped by synth manufacturers after the ’90s because they were complex and rarely used. I was surprised to see the concept (even if only two layers) revived here. In all honesty, though, I found myself only using one layer for the majority of sounds I made.

Far from being a problem, though, this is a testament to how powerful a single Program can be. The two oscillators have an excellent collection of over 200 wavetables to choose from and offer many ways of twisting them into new sounds. Also, being able to layer wavetables with key‑mapped samples is great. The included samples are excellent and cover single‑cycle waveforms, acoustic instruments, synth sounds, percussion, effects, attack transients and more.

As to the overall sound, my opinion is that wavetable synthesis is the king of pad sounds. And the Modwave doesn’t disappoint. The factory sounds are awash with ambient masterpieces, rhythmic space jams, wobbly minimalist beds, rave chord memories and menacing drones. But there’s a modern edge too. The Modwave can get close to those hypergrowl bass sounds which are popular in harder forms of electronic music right now.

...Modwave will import wavetables created in Serum without any conversion. And with thousands freely available online this is a huge selling point.

I have seen, in various online forums, the Modwave referred to as a ‘hardware Serum’ (Serum being the king of software wavetable synthesizers). There are certainly similarities. I suspect the link comes from the fact that Modwave will import wavetables created in Serum without any conversion. And with thousands freely available online this is a huge selling point.

The Modwave is an excellent synthesizer. It will take time to master, but that is true of any synth of similar complexity. My only real complaint is the lack of true free‑running LFOs, and maybe the lack of aftertouch (a module version would do very well I think). Otherwise, this is a synth capable of beautiful sounds. The easy import of custom wavetables will be a big draw for many, but ultimately it’s the depth of the synthesis engine that is most impressive. I think we will be hearing surprising and awesome sounds from Modwave for many years to come. 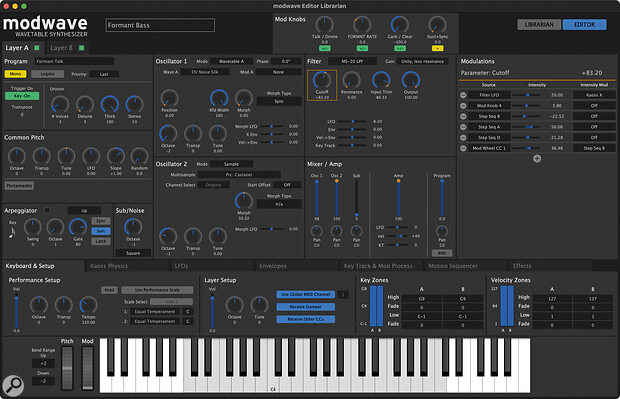 The Modwave Editor Librarian software is available for Windows and Mac OS (M1‑based Macs are supported). It connects to the Modwave via USB and is an easy way to sort and edit presets. There are more preset types than your average synth. Performances, Programs, Motion Sequences, Koass Physics, Effects, Wavetables, Scales and Set Lists can all be backed up and edited. In some cases, the software allows you to do things you cannot from the synth itself, like gain access to the full effects editors.

This is also where you import wavetables, a feature that will be of high interest to many. I’m happy to say that I was able to import my wavetable collection without any issues, and they sounded fantastic.

The Editor section allows you full editing over the current Performance. Everything is laid out logically and I think, even if you have no intention of editing via a computer, it’s an excellent way of getting a quick overview of what the synthesis engine is capable of.

Korg have produced yet another synth that offers fantastic value for money with little compromise. Lots of wavetables, lots of synthesis options, lots of innovative touches and lots of fun.