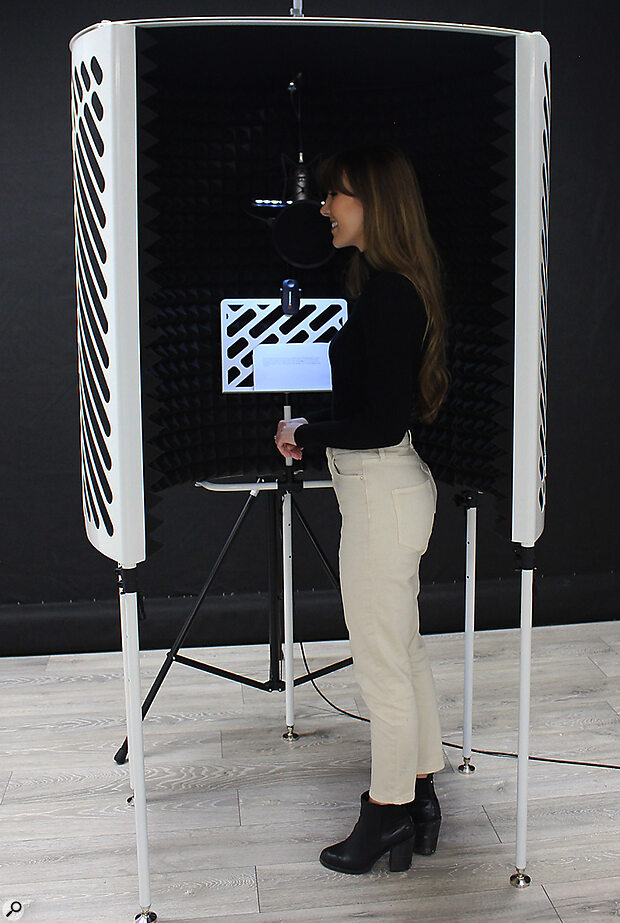 Can this open, portable device help you capture a professional vocal‑booth sound?

Recording singers or voiceover artists away from a professional studio environment presents a number of challenges, and most stem from the need either to keep noise to a minimum or to control the acoustics inside what’s unlikely to be a great‑sounding room. Several commercial products attempt to address the latter issue, and the most common devices are the ones that you attach to a spare mic stand and which wrap fairly closely around the back of the microphone, the idea being that this will give you a drier recording, with the unwanted room reflections being much reduced — so you can then place the recording in a mix using reverb and other processing. These devices work to an extent, in that they dry the sound, but they tend to introduce a boxy‑sounding coloration. The cheap old‑favourite trick of hanging polyester duvets can also work, but can be bulky and it’s an aesthetic that won’t go down well with some clients!

With the main live room at my Half Ton Studio being closed recently for some extensive renovation work, I needed a reliable way to record vocals in the control room. I required something that both sounded more transparent than the sort of ‘vocal shield’ discussed above, and which looked more professional than a bunch of duvets. So the invitation to evaluate Imperative Audio’s new PVB (which stands for portable vocal booth) was very timely!

The PVB arrived at my studio on a pallet and in a very large cardboard box, and it took two of us to get it all unpacked and set up. Once in the studio, the initial setup took about 15 minutes but it’s easy, and once you’ve done it a few times you could erect it much more speedily. 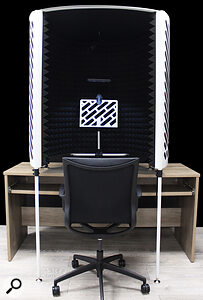 The legs are adjustable, so you can, for example, put the PVB on the floor around an amp or adapt it to sit around a desk.Essentially, the PVB creates a wraparound booth, made of four curved sections of metalwork with acoustic treatment built in. The panels sit on adjustable legs which you can set at the appropriate height for your singer, even if they prefer to sit down, or lower completely, for example to create a screen for isolating mics on a guitar amp. A snug‑fitting roof panel can be put on top to close off the booth further if you wish, and this features a slot to accommodate overhanging mic stands. There’s also a simple setup inside the booth that allows you to attach the included sheet‑music stand with a little clip‑on light. Once assembled the whole thing gives off the air of a professional product that would look very much at home in a serious home studio, single‑room production studio, or in a larger studio’s live room.

Imperative explain that the acoustic treatment in the PVB is made up of two layers of acoustic serge wool and a layer of 35kg acoustic foam, which is pyramid‑shaped to help create an irregular surface for dispersing mid/high frequencies. The challenge with this sort of treatment is to produce the desired dry sound — this requires some sound to pass through the material rather than reflect back — whilst also offering a useful degree of soundproofing. So how did it fare?

Imperative quote an impressive RT time of 0.07 seconds for the PVB, and in test recordings and real‑world projects I found this aspect of the design to work very well indeed. In fact, no sooner had I got the PVB set up at the back of my control room than I received an enquiry about making a commercial audiobook recording for a well‑known publishing company. To secure this gig, I had to send a test recording and photos of the recording area and, to cut a long story short, with the lack of access to my usual live room, having the PVB got me the booking! 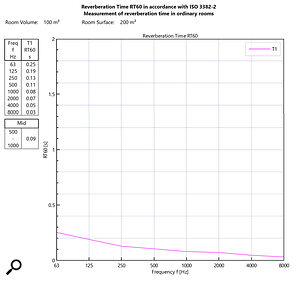 One of the most important things about a vocal booth is having a controlled reverberation time across the whole frequency spectrum. As this plot shows, the PVB does very well in this respect for a portable device.The sound of the recording captured in the booth was excellent, with a nice dry sound that was achievable without the artist having to get unnaturally close to the mic. Importantly, the recording also sounded clear and unoppressive, so the combination of acoustic materials and the shape of the booth both seem to work very well in minimising any unpleasant coloration. You have to use your own mic stand, but the generous size of the booth allows you a bit of wiggle room in positioning your mic: further away from the back (the treated end) creates a more open, natural sound, while closer to the ‘wall’ will introduce a more low‑mid‑heavy effect. As well as working well for the audiobook session, I recorded a number of singers in the booth and achieved excellent results on every occasion. My clients also seemed very happy about how the booth felt to perform in, which is an important consideration.

When judging if the PVB does what you need, there are three main factors to consider: audio quality, external noise attenuation and portability. For the first, it’s a big thumbs up. It’s easily the best‑sounding product I’ve tried in this field, and you can definitely make commercial‑quality recordings. The PVB is an open booth, of course, so it will never compete with a proper studio booth when it comes to isolation from unwanted noise. On its own, while the vocal sound will be good, it’s not going to reduce the noise in a loud home environment sufficiently that you could track professional voiceovers in there, or sing loudly without disturbing the neighbours. It does push down the noise floor, though, and in a home studio space could reduce things like computer noise and chair squeaks to a level that would work for a typical singer‑in‑a‑band recording.

Assessing its portability depends very much on your needs. This isn’t a product you can easily sling in the back of a car on your own, or take around your friend’s house to quickly get down some vocals. But for two people it’s relatively easy to set up and pack away, and move in a larger car. If I were setting up a temporary recording space for a day or more, I reckon it would be well worth the effort.

It’s easily the best‑sounding product I’ve tried in this field... I recorded a number of singers in the booth and achieved excellent results on every occasion.

The asking price means the PVB is for serious recordists, but the improvement it can make to the raw recording could easily justify the cost. Many professionals work in rented or temporary spaces now, where we don’t want to spend money on fixtures and fittings we can’t take with us, and others might find it useful in making a larger recording space or control room more configurable. In short, if you do a lot of vocal recording, the PVB is well worth your consideration.

The PVB is very effective at drying up a vocal while keeping the results sounding clean and uncoloured, and can help you make professional‑sounding vocal and voice recordings. It offers a useful degree of isolation too, though it’s not intended as a soundproofing solution.