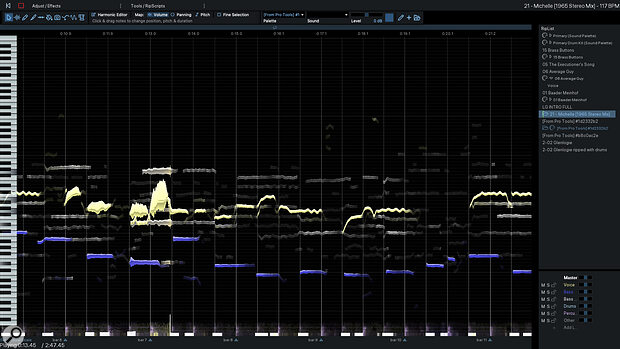 If you want to separate mixed audio, this is the best game in town.

When Hit’n’Mix launched their Infinity software a couple of years ago, it looked like an exciting technical breakthrough. Not only could it ‘unmix’ recorded music, extracting individual vocal and instrumental stems from a bounced stereo file, but it also allowed these elements to be manipulated in an open‑ended way, courtesy of user‑definable RipScripts.

However, the initial release perhaps fell short of fully realising its potential. The user interface was opaque, and the program itself apparently undecided as to whether it was a consumer application or a product for professionals. Beyond extracting stems for remixing, Infinity’s showcase features sometimes came across as novelties rather than genuinely useful tools. It was undeniably impressive that you could open up a mixed stereo file and replace the lead vocal with a bassoon, but in the real world, who would actually want to do that?

It seems I wasn’t the only one who felt that way, as Hit’n’Mix have now re‑branded Infinity and re‑launched it as two separate products. The more affordable RipX DeepRemix is targeted at DJ’ing and ‘fun’ applications, with a streamlined feature set focuses on separating mixed audio into stems and processing or effecting them. RipX DeepAudio, by contrast, is intended for the pro audio market, and offers new features intended for music production.

One such concerns integration with other music programs. In a music production context, Infinity sometimes felt like a solution in search of a problem, because the things it allowed you to do were better achieved by returning to the original multitrack. For example, if you noticed that the lead vocal was out of tune in a finished mix, you could in theory open up that mix in Infinity and tune it. In practice, though, it was quicker and more effective to return to the DAW and correct the vocal there.

RipX DeepAudio can still accept mixed stereo files, dragged and dropped from the Mac OS Finder or Windows Explorer. However, it can also be brought into a DAW‑based environment. In hosts that have ARA support, audio can be edited with RipX directly within the arrange page. In Logic and Ableton Live, RipX can be specified as the external sample editor. In Pro Tools, a simple AudioSuite plug‑in allows chunks of audio to be transferred, processed and then rendered in place. All of this is designed to hammer home the message that RipX DeepAudio isn’t only for working with mixed audio: it is useful on individual tracks too.

Whatever method you choose for getting audio into RipX, the first thing that happens is that it gets ‘ripped’. Superficially, this process seems similar to other source separation algorithms, but there are some key differences. For one thing, unlike most source separation software, the processing is carried out on the host computer rather than in the cloud, meaning that you don’t need a fast Internet connection to use it. For another, RipX doesn’t just separate the source into two or three stems: it attempts to reconstruct every significant instrument as a separate stem. But most importantly, it doesn’t just split one audio file into several. A ‘rip’ is not an audio file at all, but a musical representation of the song, with notes detected and represented as ‘blobs’ that can be selected, processed and edited. RipX also extracts tempo information and places bar lines automatically.

In other words, ‘ripping’ a file doesn’t just separate it into stems, but makes the contents of each stem editable. This, of course, is why RipX is now being presented as a useful tool for working on single sources. And compared with some other programs that can manipulate polyphonic audio, it has the big advantage that the ripping process itself does not change the sound of a track in any way; you’ll only notice any difference once you start to edit or process material within a rip.

It’s not often that trying out a piece of software causes me to run around the building insisting that other people have to come and listen...

Compared with the earlier Infinify, RipX adopts more visual conventions from the pro audio world, defaulting to a dignified dark‑themed appearance. It’s still recognisably the same program, though, with pitched material presented as coloured blobs on a horizontal timeline, which animate as the playhead passes them (there’s still no continuous scrolling option). Percussion and other unpitched audio is relegated to a small strip along the lower edge of the window. The upper right‑hand area of the screen lists all the audio files that have been ripped and are available for editing, while the lower right‑hand corner shows the detected instruments within the current rip. These can easily be soloed or muted, and when an instrument is made temporarily inaudible this way, its blobs disappear from the GUI.

This isn’t always helpful when you are working with a rip that contains multiple instruments. There’s usually a bit of tidy‑up work that needs to be done to identify, say, fragments of vocal that have been mis‑identified as piano; this might be easier if the piano notes were still visible and selectable while the vocal is soloed. In general, though, it’s straightforward to select, move, and reassign individual notes, groups of notes and entire parts, using fairly standard DAW‑style mouse tools such as pointer and scalpel.

One option that’s available is to transfer the selected note to the Sound Palette, whereupon it becomes source material for the Draw Sound and Replace Sound tools. These allow new notes to be added or existing ones to be replaced by whatever is on the Sound Palette. There’s also a Clone Tool, which lets you copy attributes from one note to another, and a Pattern Tool, which can be used to vary qualities such as pitch, formant or pan in regular patterns: you could, for example, use it to add vibrato or tremolo to notes. Finally, the Draw Pitch tool is self‑explanatory, and the Smooth Region tool ‘averages out’ selected attributes across a selection.

The basic tool palette by no means exhausts the sound‑mangling potential available in RipX. A further drop‑down menu offers 15 semi‑preset processing options that can be applied to the selection. These are applied in degrees using frustratingly unresponsive on‑screen sliders. Some, such as Quantize Pitch, Formant Shift and Vibrato, have the potential to be useful in a music‑production context, while others fall into the ‘Why would I want to do that?’ category. 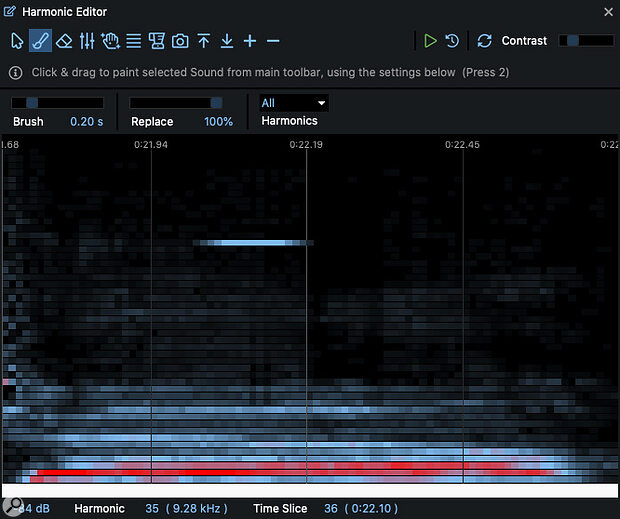 The Harmonic Editor represents individual harmonics within the selected note on a ‘heat map’ display, and offers various tools for editing them.

Fear not, though, because there’s still plenty more to explore. Selected notes can be opened in the Harmonics Editor, a separate floating window that bears a passing resemblance to a spectral editor, but is perhaps better understood as something more like an additive resynthesizer. It displays the energy within the selected note as a sort of ‘heat map’, with time along the horizontal axis and the harmonic series on the vertical axis. The editing tools available mostly draw on the paradigm established by image editing software such as Photoshop.

Finally, and remarkably, most of the editing features described above, including entire editing environments such as the Sound Palette and Harmonics Editor, are examples of RipScripts. This means that not only are the tools themselves included, but also the Python source code. If you have the time and the inclination, you can inspect and modify the code behind nearly all of RipX’s editing functionality, and create your own RipScripts. This was a core part of the original Infinity, the idea being that users would collaborate on and share scripts on a dedicated Web forum. At the time of writing, alas, that still doesn’t seem to have gathered much momentum. 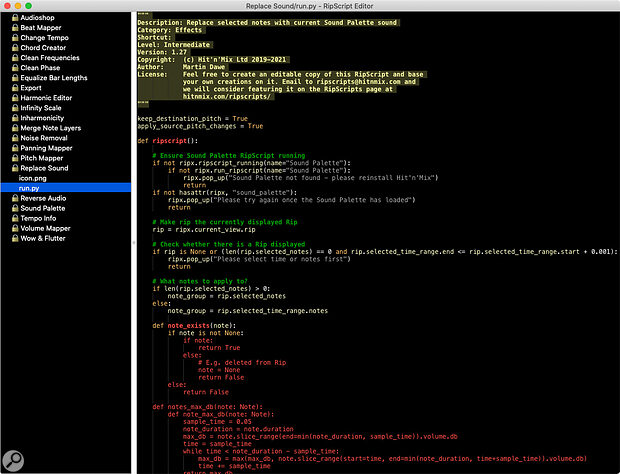 Most of RipX’s features are implemented using its own RipScript functionality, and the source code is supplied so that you can edit them or write your own.